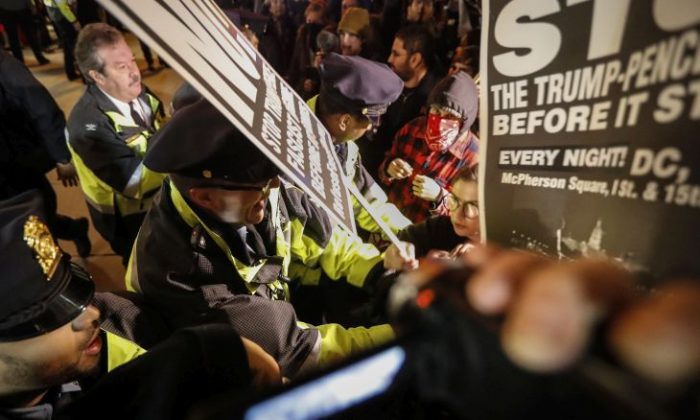 Police push protesters off the sidewalk in front of the National Press Building ahead of the presidential inauguration, Thursday, Jan. 19, 2017, in Washington. (AP Photo/John Minchillo)
US

Protesters and supporters of President-elect Donald Trump clashed outside a pro-Trump event in Washington the night before his inauguration. Police used chemical spray on some protesters in an effort to control the unruly crowd.

Hundreds of protesters gathered outside the National Press Club in downtown Washington, where the “DeploraBall” was being held. The name is a play on a campaign remark by Hillary Clinton, who once referred to many of Trump’s supporters as a “basket of deplorables.”

Protesters booed any time presumed ball-goers in suits, tuxedos or dresses came in or out of the event.

One man waving a pro-Trump flag had debris thrown at him and was chased to the nearby Warner Theater, where Fox News Channel personalities Sean Hannity and Geraldo Rivera happened to be outside waiting to go into another event. Hannity engaged hecklers by raising his fist; Rivera laughed and smiled before entering the theater.