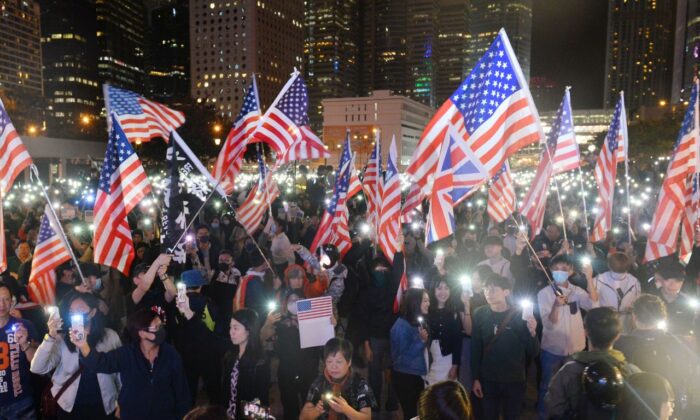 Protestors wave U.S. flags and hold up their lit-up mobile phones as they attend a gathering at the Edinburgh place in Hong Kong on Nov. 28, 2019. (Sung Pi Lung/The Epoch Times)
HK Current Affairs

HONG KONG—American flags showed up in the form of paper print-outs, animated images displayed on smartphones, and dozens of flagpoles waving in the air.

Thousands of protesters young and old turned out for a rally at a public square in the heart of Hong Kong’s business district on Nov. 28 evening to show their appreciation to the U.S. government for its passage of the Hong Kong Human Rights and Democracy Act, which was signed into law by President Donald Trump on Nov. 27 evening.

The American flags are out at tonight’s Thanksgiving Day rally in appreciation of #HKHumanRightsandDemocracyAct signing into law, at Edinburgh Place #HongKongProtests pic.twitter.com/m4x1JVGgVj

The Hong Kong Human Rights and Democracy Act requires the U.S. Secretary of State to annually review whether the former British colony is “sufficiently autonomous” from mainland China to justify its special economic privileges granted under the United States-Hong Kong Policy Act of 1992.

That U.S. law stipulates that Hong Kong be considered a separate entity in matters of trade, investments, and visas after the territory returned to Chinese rule in 1997.

Congress passed the bill last week and sent the legislation to Trump to sign into law.

Additionally, the law paves the way for sanctions on both Chinese and Hong Kong officials who have violated human rights in the city. The audience cheered uproariously when rally speakers mentioned this provision.

Also signed into law was a bill that would prohibit the export of U.S. control equipment to the Hong Kong police force. Protesters are increasingly angered at what they perceive as excessive force in dealing with demonstrators.

Several prominent local activists spoke at the rally. Among them was Joshua Wong, the iconic figure from the 2014 Umbrella Movement, who said that the landslide election victory by pro-democracy candidates last Sunday showed that “we [pro-democracy] are the majority.”

#Thanksgiving2019 has a powerful meaning for the #HongKongProtester. American flags abound.

A large crowd gathers in appreciation of the passage and @realDonaldTrump’s signing into law of the #HKHumanRightsandDemocracyAct – at Edinburgh Place in central HK #HongKongProtests pic.twitter.com/noTEzCf8Ho

On Nov. 24, the pro-democracy camp scored a resounding victory against the pro-Beijing camp, winning over 380 seats out of 452 district council seats. The elections also saw a record turnout— 2.94 million Hongkongers cast their votes, or 71.2 percent of the eligible voting population.

Hong Kong leader Carrie Lam, who was approved by Beijing’s leaders, has since said that she will “seriously reflect” on the message voters delivered to her, but has not publicly addressed whether her handling of the ongoing crisis led to the pro-Beijing camp’s defeat.

Wong explained that he tried to lobby U.S. lawmakers to pass a similar bill in 2014 after the Umbrella Movement that called for universal suffrage in city elections, but not many of them showed any concerns. He added that the passing of the bill yesterday was the result made possible “by Hongkongers raising awareness inside and outside of the city.”

Student union leaders also took to the stage and said that the Chinese Communist Party is “the most brutal colonizer of the 21st century.”

Hong Kong activist and singer Denise Ho sang the unofficial Hong Kong protest anthem on the stage during the rally.

The U.S. national anthem was also played and sung during the rally.

A protester named John at the rally told The Epoch Times’ sister media NTD said Trump’s signing of the bills were an encouragement.

“After a few months of this unrest, finally we get some progress … Without this, maybe we are not as motivated,” he said.

“We want democracy … We are standing with the same value [as the United States]. … We get more hope to stand against China,” John added.

Another protester named Toby told NTD that the Chinese Communist Party “has been suppressing and repressing our freedom and democracy.”

“We just want freedom and five demands. That’s all we are asking for,” he said, referring to protesters’ demands, including universal suffrage and an independent inquiry into police violence during the protests.