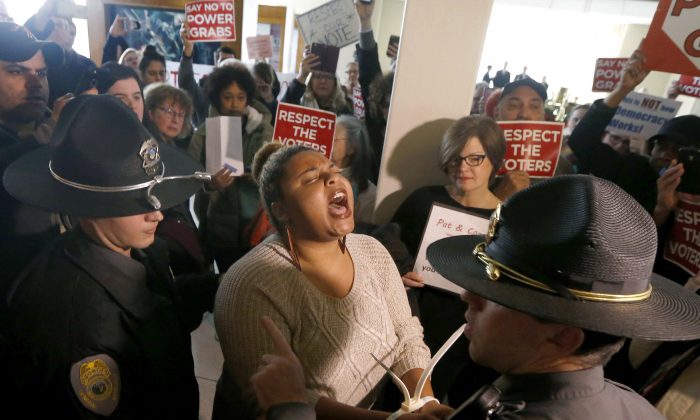 A protestor shouts as she is arrested outside the House gallery during a special session of the North Carolina General Assembly at the Legislative Building in Raleigh, N.C., on Dec. 16, 2016. (Ethan Hyman/The News & Observer via AP)
US

Protesters Rip GOP for Taking Away Next Governor’s ‘Power’

“We voted for a new governor and they’re choosing to come and … take away the power,” said Caren Parker of Carrboro, among the crowd who demonstrated this week against the Republican-controlled General Assembly, leading to more than 50 arrests.

So what’s next for Gov.-elect Roy Cooper and other fellow Democrats now that a special session is over that passed laws designed to weaken them?

Lawsuits and more demonstrations are likely, although it’s unclear how effective those will be.

“Once more, the courts will have to clean up the mess the legislature made, but it won’t stop us from moving North Carolina forward,” Cooper said in a statement after the legislature adjourned an extraordinary three-day special session Friday.

McCrory, who lost to Cooper by about 10,000 votes in November, quickly signed into law a bill that merges the State Board of Elections and State Ethics Commission into one board composed equally of Democrats and Republicans. The previous state elections board law would have allowed Cooper to put a majority of Democrats on the panel.

The law would also make elections for appellate court judgeships officially partisan again, which could favor Republicans. A Democrat’s win last month in an officially nonpartisan Supreme Court race will give the party its first majority on the court in almost 20 years.

Another bill that received final legislative approval would subject Cooper’s Cabinet choices to Senate confirmation and would allow Cooper to designate only up to 425 state employees as his political appointees, compared with a cap of 1,500 for McCrory.

The Cabinet bill apparently remains on McCrory’s desk. Emails and a phone call to McCrory’s office seeking comment weren’t returned. With 30 days to decide whether to sign or veto a bill, McCrory could kick the bill to his successor Cooper, although that’s unlikely. Republicans will continue holding veto-proof majorities in 2017.

Republicans call their approval of legislation reasonable actions to rebalance state government before a new administration takes office. The North Carolina governor’s powers have expanded since the state became the last in the country to give the veto to its executive in 1997.

Several pieces of legislation passed by Republicans since they took control of the General Assembly in 2011 have been struck down by courts.

House Democrats are convinced any new laws also will be thrown out. They formally protested all three days because they said the method by which Republicans called themselves in—minutes after an earlier special session McCrory announced for disaster relief legislation ended—wasn’t initiated properly. The issue involves the collecting the signatures from enough House and Senate members.

Bob Orr, a former state Supreme Court justice, doubts the success of a challenge of the constitutionality of holding the extra special session if there are enough signatures.

But Orr said the bills passed by the legislature that address the confirmation of Cabinet officials and transferring power from the State Board of Education to the new Republican state school superintendent aren’t as cut and dry.

While the state Constitution gives the Senate power for “advice and consent” of the governor’s officers, “where that balance of power lines between the legislative branch and the executive is not settled,” said Orr, also a previous Republican gubernatorial candidate.

Lawmakers’ veto-proof majorities since 2013 and the uncompetitive election districts they drew have allowed legislative Republicans to ignore Democratic viewpoints.

Retired school librarian Carolyn White, a longtime demonstrator who was arrested two years ago as part of the “Moral Monday” protests against GOP-led legislative policies. She said that arrest didn’t seem to make a difference, but she’s still speaking out.

“Just like the civil rights movement, it’s forward together,” White said Friday. “You just have to keep going forward.”