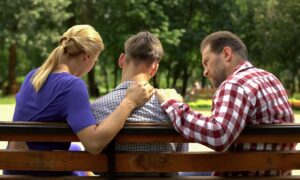 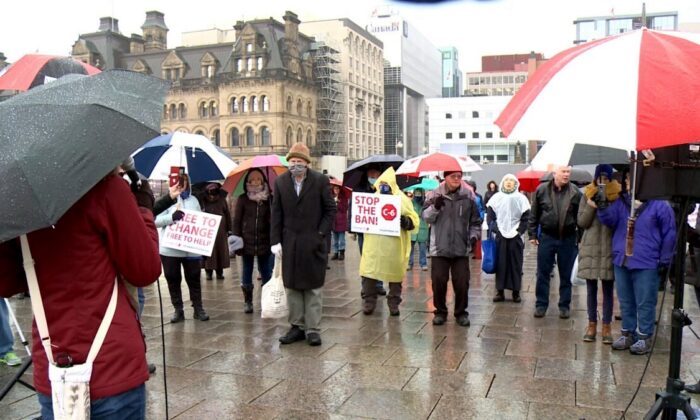 Protesters at the Stop the Ban rally against Bill C-6 on Parliament Hill in Ottawa on Dec. 4, 2020. (Gerry Smith/NTD Television)
Canada

The organizer of a protest against the proposed ban on conversion therapy held on Parliament Hill on Dec. 4 says that if passed, Bill C-6 will put parents, faith leaders, and clinicians at risk of being jailed, and is calling for the bill to be withdrawn.

“We’re going to have pastors and priests who are going to go to jail for two years. That’s what it prescribes—two years for publicly preaching the Bible,” said David Cooke, the national campaign manager for Toronto-based Campaign Life Coalition, a pro-life and pro-family organization.

Tabled in the House of Commons on Oct. 27, Bill C-6 seeks to create criminal offences for “treatment or services designed to change an individual’s sexual orientation to heterosexual or gender identity to cisgender or to reduce non-heterosexual sexual attraction or sexual behaviour.”

The government says that if passed, the legislation will make Canada’s laws on conversion therapy the most progressive and comprehensive in the world.

In his speech at the Stop the Ban rally, Cooke gave an example of how parents could be impacted if the bill is passed.

“If Johnny comes home from school one day, and he says, ‘Oh, my teacher said that there’s no boys and no girls, and we can be whatever we want.’ And then the parent, the mom says, ‘Johnny, you’re a boy, believe me, you’re a boy.’ If word gets out, not only could the child be taken away, the parent could go to jail for five years—and that’s a private conversation in the home,” he said.

“It’s going to criminalize parents who want to help their kids just simply accept their own biology.”

He fears a provision in the bill that would “authorize courts to order the seizure and forfeiture of advertisements for conversion therapy or order their removal from computer systems” would also restrict the freedom of speech and literature.

“We’re going to find that books, videos, websites, articles, perhaps the Bible itself will be censored or banned,” he said.

Cooke is calling for the bill to be withdrawn. He said it’s not enough to tweak the bill “just to fix the definition,” as some politicians have said, but it “has to go, totally and completely, no compromise.”

He presented a petition opposing the bill signed by 14,000 people to Conservative MP Derek Sloan, who also joined the event. Sloan was one of the seven MPs who voted against the second reading of Bill C-6 on Oct. 28. He assured the protesters that their voices would be heard in Parliament.

Another speaker was Dr. Ann Gillies, a trauma therapist at Restoring the Mosaic, an organization that informs policymakers with clinical research to assist them to establish policies that help individuals with identity crisis to recover holistically.

“Every single person, child, should be able to seek the counselling and the mental health care that they desire. It’s not up to the government to tell them what to do or who to see for therapy. That’s just wrong,” Gillies said.

“And those within the LGBT community need to be able to be free to see people that they can have help for with unwanted same sex attraction.”

“If it’s same-sex-oriented I would not be able to help them under this bill,” she said. “This bill will hurt the LGBT community.”

Christian Heritage Party Deputy Leader Peter Vogel said Bill C-6 is a “one-way street” that makes a “value judgement, a moral judgement about what forms of sexual attraction are better than others.”

Justice Minister David Lametti has said conversion therapy “is a cruel practice that can lead to life-long trauma, particularly for young people.”

Cooke points out that while the government says the bill is about stopping a practice that is abusive to those in the LGBTQ community, that’s not mentioned in the legislation.

“There is nothing about torture, there’s nothing about abusive practices. In fact, in our criminal code, the Criminal Code of Canada, we have many excellent provisions against abuse, harassment, kidnapping, torture, we have wonderful provisions in there.”

Bill C-6’s definition of conversion therapy does not apply to services and practices that relate to “gender transition” or to a person’s “exploration of their identity or to its development.”

Cooke claims the bill, which will receive a final vote in Parliament in the coming weeks, is “ideological,” with an agenda behind it.

“This is really just trying to push a certain mindset, a certain philosophy on all Canadians, and really to shut down those who are conservative-minded, who are traditional-minded.”