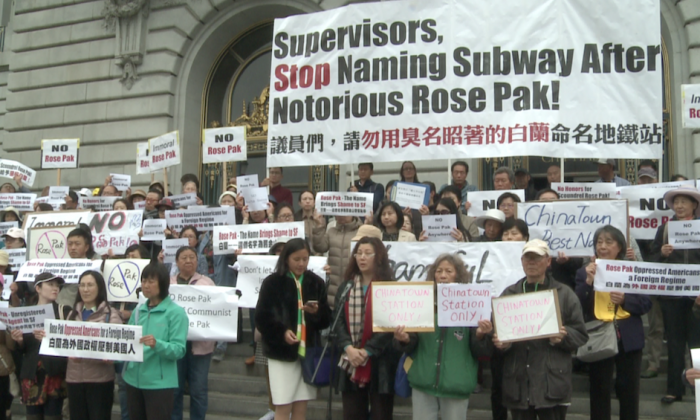 SAN FRANCISCO, Calif.—Over the past few months, San Francisco residents and non-residents have gathered in the city to protest a proposed name for the new Chinatown subway station.

The San Francisco Board of Supervisors voted in June to name the station after the late political power broker Rose Pak. The protesters have expressed concern that Pak was known for corruption and had deep ties with overseas government affairs.

Based on conversations with local people, many do not know who Pak was and why there is much controversy over the naming.

Bay Area resident Khai Vu said: “I’ve asked some people to sign petitions to not use Rose Pak’s name, and many of them didn’t know what’s happening. … For those living in San Francisco, I don’t think it was on their radar. It feels like the Board of Supervisors are pushing this proposal without any support from their voters.”

During a Board of Supervisors meeting in July, many people voiced their opposition to naming the station after Pak. One commenter, Susana, expressed that several supervisors merely followed along with the resolution and the author’s lead.

“What if the views of the author [do] not represent District 3? … The simplest way out is to rescind it. So why do you want to aid to stir up the community?” she asked. “By agreeing to insert Pak’s name, it is inevitable to make your constituents feel that you may not care for the people who were bullied by her. … I urge you to use judgement and principles, which would win respect from [the] Chinese community and constituents.”

Vu said: “In San Francisco, [Pak] was a political figure working for the Chinese Communist Party [CCP]. If this fact [were] known by more people, her name would not have been considered.”

Pak was an executive director with the China Overseas Exchange Association (COEA).

Lee, whom she helped install into office, was previously investigated by Aaron Peskin of the San Francisco Board of Supervisors.

Peskin filed a 37-page report to the Ethics Commission in 2011. He commented on the finance campaign in an interview with New Tang Dynasty Television.

The protesters held a rally and speeches in May, sharing their experiences of Pak’s corruption and oppression of human rights. They held signs reading “No Rose Pak” and “Rose Pak Oppressed Americans,” among other things.

One of the larger banners read “Supervisors, Stop Naming Subway After Notorious Rose Pak!” It was displayed in both English and Chinese.

Falun Gong is a traditional Chinese spiritual discipline based on the principles of truthfulness, compassion, and tolerance. It has been violently persecuted in China since 1999.

Pak has aided the Chinese communist regime in defaming Falun Gong and bringing the persecution of Falun Gong to San Francisco.

She prevented the Tian Guo marching band, which is comprised of Falun Gong practitioners, from attending San Francisco’s annual Chinese New Year parade, which holds a high ethnic presence for the community there.

Vu said: “The most impacted … is the Chinese community in Chinatown. Rose Pak has bullied many in the community there, and having her name be honored is a slap to all their faces. Many of them don’t speak out against this for fear of getting persecuted by the CCP.”

When asked what he had to say about those who feel the Pak naming situation does not concern them, such as tourists and non-San Francisco residents, he responded: “They probably don’t know who is Rose Pak now. But they will in the future. Rose Pak worked for the Chinese Communist Party. And when the CCP’s crimes against humanity [are] known in the future, they will surely feel disgusted by Rose Pak’s name.”