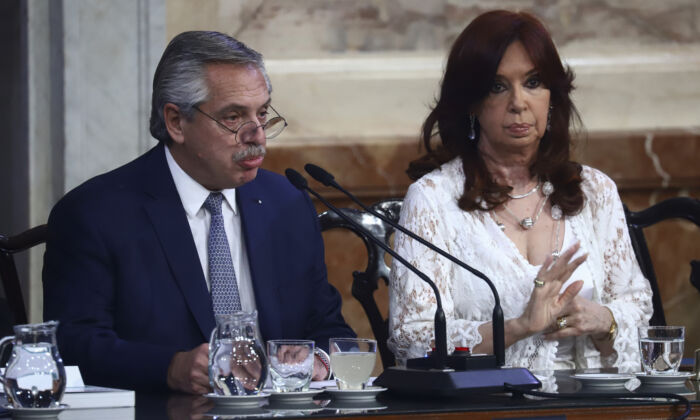 President of Argentina Alberto Fernandez delivers his speech next to Vice President Cristina Fernandez during the opening of the 140th period of the Argentine Congress 2022 on March 1, 2022, in Buenos Aires, Argentina. (Matias Baglietto/Getty Images)
Americas

Dozens of Argentine protesters gathered at the National Congress building during a congressional session on March 10 to throw stones and other projectiles, breaking windows and damaging items within offices, as lawmakers debated the government’s agreement with the International Monetary Fund (IMF) on refinancing billions in debt.

Some demonstrators lit fires outside and burned the IMF logo.

The Peronist administration of President Alberto Fernandez is in the process of restructuring existing debt with the IMF, which ignited opposition protests from residents who have been angered by the nation’s protracted economic downward spiral.

Police responded quickly to contain the dissenters, who burned garbage cans forced against the fence outside the congress and also wielded them as weapons against law enforcement officers.

Similarities exist between the March 10 incident and the December 2017 demonstrations against the National Congress over pension reforms, which was another publicly contested maneuver to reduce debt by former President Mauricio Macri.

In 2018, the IMF financed the largest loan in the institution’s history for the perpetually indebted nation under the stewardship of Macri, amounting to $57 billion.

Vice President Cristina Kirchner posted a video early on March 11 to her Twitter account, showing the damage done to her office.

“The images you are seeing now are those of my office after the stones. … Paradoxically, it was my office that they attacked, the office of the one who stood up to the vulture funds, who kept the International Monetary Fund out of the country,” Kirchner said in the narration.

Kirchner said that during the assault on congress, a “massive political mobilization” was taking place against the new IMF deal. She also said the demonstration outside occupied the entire plaza in front of the National Congress and Avenida de Mayo to July 9 Avenue.

Maximo Kirchner, son of the current vice president, and 40 other legislators didn’t vote in favor of the new IMF agreement, which will grant an additional loan to pay down the existing, unprecedented $57 billion deal from 2018.

A segment of the 15-page document the opposition parties submitted to the chamber of deputies reads, “The application of the policies of this agreement [with the IMF] not only will not solve any of the structural problems of the Argentine bi-monetary economy, they will aggravate them.”

Yet despite official and public resistance, congress garnered enough votes to pass the new debt measure on March 11.

Even the IMF recognized the folly in its 2018 mega-loan in a December 2021 internal evaluation that criticized the agreement and terms.

“The program ended up with a pro-cyclical policy stance, arguably worsening capital flight rather than boosting confidence,” the report noted.

Borrowing money from the organization to cover money management issues has been a go-to move for Argentine governments since 1958. Despite the granting of massive resources to different administrations over the span of decades, inflation trends persist.

More recently, the augmented rates have climbed drastically since 2015, while the cost of living in Argentina has risen 50 percent over the past year alone.

Distorted price subsidies meant to camouflage the true damage done by inflation were removed in 2016, causing the rate to jump back up to 40 percent, which was the highest since 2003.

Last week was the second time in two months Fernandez’s government met with IMF officials to discuss an extension on the debt inherited from the former administration.

Cost of living increases combined with the complications of economic recovery from the pandemic left Argentines enraged, sparking 2,474 social protests against the socialist government last year.