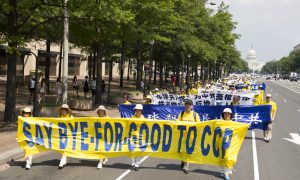 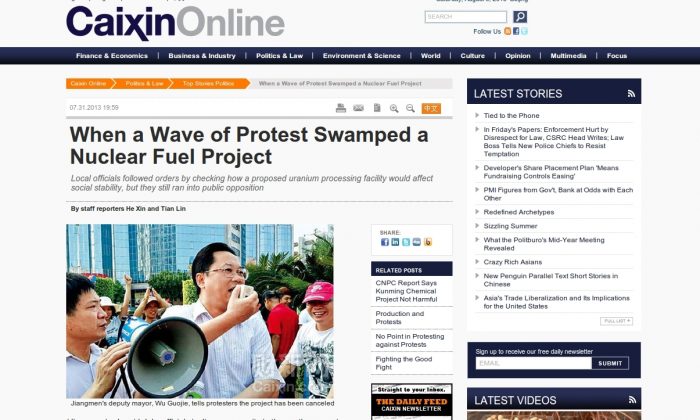 The report on Caixin shows Wu Guojie, the deputy mayor of Jiangmen, the city that wanted to build a nuclear power plant, telling protesters the project has been canceled. The protests against the power plant forced officials to cancel it, an uncommon outcome in China. (Screenshot/Epoch Times)
China

More than 1,000 protesters stopped a nuclear fuel project in China’s Guangdong Province despite officials’ best efforts to keep them happy.

The uranium processing facility was supposed to be built in the Pearl River Delta in the city of Heshan. On July 12, officials from Heshan and the city of Jiangmen were unable to stop citizens from protesting against it.

“The more we explained, the more people believed we were deceiving them,” a local official told Caixin Online.

“No one would listen,” another local official told the media.

The China National Nuclear Corp. (CNNC) planned to build the project, which was worth 37 billion yuan (about $6 billion), according to Caixin. Before they made their plans public, officials took special measures to make sure the public wouldn’t start a protest.

They carefully evaluated how much social instability the project would cause, according to Caixin. The plan was approved by the National Development and Reform Commission and provincial officials.

Before they started building, they had to move several villages out of the way, but they didn’t have trouble with that. They didn’t tell the villagers exactly what they were going to do with the land, though.

On July 4 they publicly announced their plans and then gave the public 10 days to comment.

Netizens passed the news around on China’s Twitter-like Sina Weibo, and local residents quickly became upset. They hadn’t realized the project was going to involve radioactive fuel, and they were unhappy that they hadn’t been asked for their opinions sooner, Caixin reported.

On July 12, a swarm of over 1,000 protesters showed up at the Heshan city offices.

The local officials quickly gave the protesters 10 additional days to comment and said they would educate the public with TV programs, Caixin reported.

The next day, however, they announced that they had canceled the project. City officials expressed regret that they would lose the tax revenue the facility would have brought, according to Caixin.