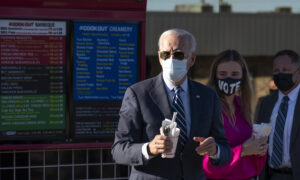 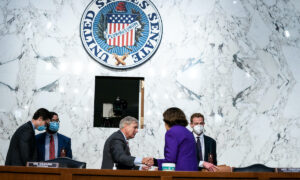 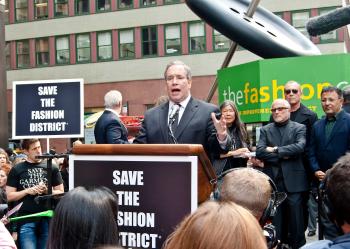 Manhattan Borough President Scott Stringer speaks to a cheering crowd during a rally to save the Garment Center on October 21 in front of the landmark Button and Needle Statue. (Joshua Philipp/The Epoch Times)
US

By Joshua Philipp
Print
NEW YORK—A sea of protesters almost too thick to navigate through waving placards filled the sidewalk on Wednesday in front of the Button and Needle Statue on 7th Avenue, a landmark of New York's Garment Center.

The hundreds of protesters were there to save the area from city officials who are trying to change zoning in the area that has sustained the industry in Manhattan.

The Garment Center stretches nine million square feet of commercial space between West 34th Street and West 40th Street; and between Broadway and Ninth Avenue. Mayor Michael Bloomberg attempted to give the district a 300,000 square foot building in exchange for freeing up the zoning restrictions. The deal fell through because the building was not available.

"The purpose of land use and zoning is to figure out how we get the right mix," said Manhattan Borough President Scott Stringer to the roaring crowd.

"How we support commercial real estate, how we support our small businesses, how we let Wall Street thrive, and how we make sure that the manufacturing and the creative energy in this city is protected. That is what smart zoning is supposed to do." Said Stringer.

There are currently more than 800 fashion companies which employ 175,000 people in New York. The businesses bring in $10 billion in total wages, with estimated tax revenues of $1.6 billion, according to a press release issued by fashion designer Nanette Lepore.

Keri McGlynn, 27, who works in fashion design, said she attended the event to "save what little is left of the manufacturing industry in the U.S." She added that "New York is such an inspiration. A lot of people come here to get ideas for fashion and I think that's important."

As the event continued, the design students, sewers, drapers, activists, and others who came to support began to overflow from the designated police barricade, which stretched a full city block and a large portion of the sidewalk.

A line of police repeatedly ushered the crowd to move so that pedestrians could pass.

"We need our government to understand that it takes a village to make a dress," said designer Nanette Lepore in a speech.

"A designer cannot survive alone," she said. "Together we are strong and we will not give up our neighborhood and we will not stand by and passively witness the decimation of the future for American designers. It would be socially and morally wrong to let the Garment Center die."