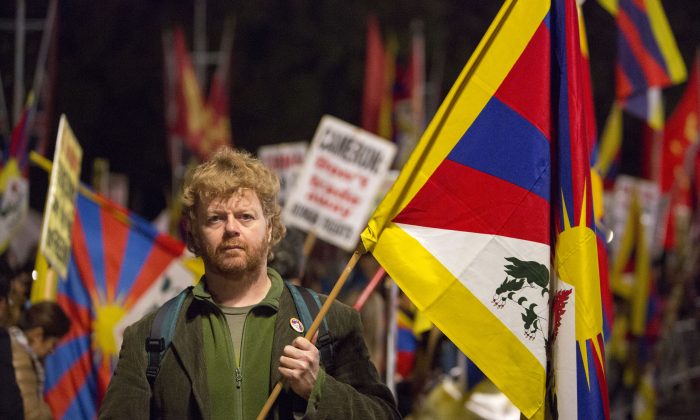 Paul Golding of the Tibet Society calls for Xi Jinping to respect freedom and human rights during a protest on October 20th, 2015 (Si Gross/Epoch Times)
China

As the first day of Chinese leader Xi Jinping's state visit came to a close, we found out more about the people protesting
By John Smithies

Heading down toward Buckingham Palace through Green Park, the sound of chanting grew louder.

Although the day’s protests were coming to an end they had lost none of their energy. A group of Tibetans was shouting “No more CCP” and “China, China, China, out, out out!” while a line of policemen encircled the remaining pro-CCP supporters. Newscasters stood to the side, delivering pieces to cameras while the protests still had life left in them.

It was mainly Tibetans with their colourful banners, but one lone blue flag was being waved by a smartly dressed woman. She was a Uyghur, the heavily oppressed Muslim group from the Xinjiang region in northern China.

Toward Horse Guards Parade, where Xi Jinping, the leader of the Chinese Communist Party, had been chaperoned down the mall from in the Queen’s carriage, around 15 Falun Gong protesters silently held banners. They were calling for previous Party leader Jiang Zemin to be held accountable for initiating the persecution of the spiritual practice in 1999.

Taking stock of the day, three interviewees offered their thoughts.

The day’s gone well. We know that the Chinese Embassy bused in seemingly thousands of students. It looked like a propaganda event in Beijing with all the banners and the Chinese waving their flags. We felt a bit swamped.

Subsequent to that it really picked up at Parliament Square where it was a bit more balanced. We had about 150 protesters and there was a similar number of pro-China supporters.

There were two messages. One is to Xi Jinping himself, which is calling for freedom and human rights for Tibet but of course across China as well. And the second message is to Prime Minister David Cameron. We want Cameron to raise the issues with Xi Jinping and to come out with a really strong, robust public statement.

Whether it will actually happen is questionable. It seems the way the British government is going at the moment in terms of kowtowing to China and all the trade deals that it’s very unlikely to come out with any statement.

It says that they talk about things behind closed doors but what we want to see is some transparency–what is it that they talk about behind closed doors? But more importantly, come out with it publicly, because the people in Tibet and China, those who are fighting for human rights, they want to know that there is support for them internationally. And unless these governments come out and publicly support that, they don’t know it and feel like they’ve been forgotten.

I’ve seen a lot people who’ve come down for their first ever protest because they were appalled at what’s happening in terms of China, and the U.K. rolling out the red carpet for them. So it is slowly getting out there and the longer this goes on, the more people are going to realize how much we’re selling the U.K.’s soul.

The government needs some morals, it needs to go back to what’s important to the British people. I believe that’s the basics of human rights, freedom, and democracy.

I’m here to protest against the Chinese human rights violations in my country. There are thousands of political prisoners in Chinese jails. Ilham Tohti, the moderate professor who challenged the Chinese government to implement autonomous policies, was imprisoned for life. I am protesting to say that he should be released immediately.

There are thousands of people like him. Like Nurmuhemmet Yasin, the author of the story “Wild Pigeon” who was sentenced to 11 years. For the last three years we haven’t had any information as to whether he is alive or dead. I can give too many examples.

People hoped that when Xi Jinping came to power things would change, but they only changed for the worse.

I am also protesting that the British government, instead of standing by people like oppressed Tibetans, Uyghurs, and Chinese human rights defenders, is receiving him on the red carpet. It sends a very wrong message because the Chinese people are watching on the TV how he is received by the U.K.

This country is where Amnesty International and International PEN were born, it’s a country that historically upholds human rights. But today we see none of that. This country is becoming a partner to this barbaric regime where people are being incarcerated for life for just speaking up.

I used to feel sad but now I feel very angry. We are not against trade, you can do trade of course. But you have to stand on the side of the just. Justice, human values, and human dignity are important. Why do you have double standards? You think British people deserve human rights but those in China do not? The same principles should be applied throughout the world.

Today has been good. When I came here I saw lots of wide CCP banners all around. I think they are from the Chinese Embassy because I saw people collecting the banners at the end.

My father is still imprisoned because of his belief in Falun Gong. Our family has suffered a lot from this persecution. The whole family has been broken. My father has very bad health, lost his freedom, lost everything, just because of his peaceful belief.

It’s destroyed my life and my family members’ lives, who I love so much. We were just a happy family with a peaceful belief, and suddenly we lost everything.

It’s lucky that I have this belief that I can be strong.

It still hurts a lot. When I was 12 the persecution of Falun Gong started and my family was harassed by policemen. They broke our door down and searched our house. Every day I worried about my parents that they may get caught and leave me.

When I grew up I saw my friends all have family or at least some people with them who they can talk with. But I don’t have that.

My mother was sent to prison in 2003 when I was about 16. Think about that. A 16-year-old girl who lost every single family member. And the whole society sees your family as outcasts.

It’s lucky that I studied well and my family had good friends who could understand, so I still had a small environment that was warm.

We want Xi to see us and know we are here waiting for him to make a change. I really hope he can listen to his people.