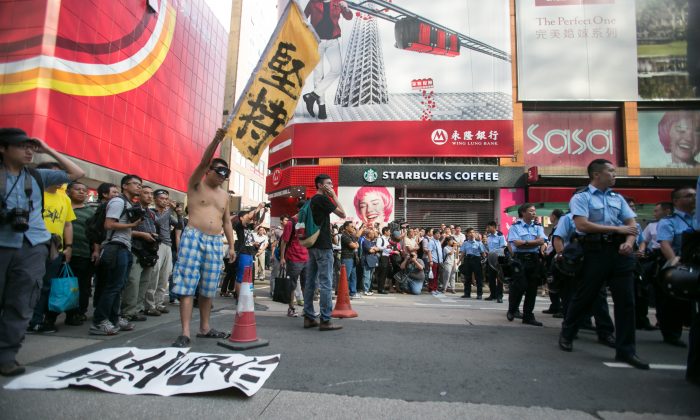 Police and pro-democracy protesters stand off on a small section of Nathan Road after the police came in early in the morning and removed all of the barriers in the surrounding areas in Mong Kok, Hong Kong, on Oct. 17, 2014. (Benjamin Chasteen/Epoch Times)
China

Protesters Comment on Clearing of Mong Kok in Hong Kong

HONG KONG— The hours after dawn have always been the quietest, and therefore most perilous, for the Mong Kok protest site here, which for the last several weeks of the occupying protests has kept its own counsel from the student organizations that are liaising with the government.

So when the police began their move to clear the roads at about 5:30 a.m., they encountered little resistance. The word quickly spread on social media, but by then it was too late: Argyle Road, one of the main streets, was fully cleared, and protesters had been relegated to a smaller stretch of Nathan Road.

There they quickly regrouped, setting up tents and gazebos and carting in supplies of water, snacks, and surgical masks (in case the police use tear gas) from nearby stores.

Mong Kok is the rougher cousin to the Admiralty protest site around government offices; rather than being the main focus of media attention, where charismatic young student leaders come out to rally large crowds, Mong Kong is home to a smaller crowd of seasoned oddballs and agitators, who like to hold forth on open mic sessions deep into the night, as crowds gather round and holler or applaud as fit.

Instead of school uniforms and study desks, like at the Admiralty site, Mong Kok protesters sport piercings and tatoos, and roll around on mattresses plonked down in the middle of the road.

“We’re here because we have to persevere. We Hong Kongers will stand up again,” said Sarki Lam, a 27-year-old hospital worker who was setting up a tent. When asked whether the proposition seemed futile in light of the police clearance and reduced scope of the Mong Kok site, he admitted that “there’s no outcome, but we need to do something.”

“We Hong Kongers are very fast. They tore us down, and we’ve set up here again in a few hours.”

Police barricades contained protesters to a stretch of Nathan Road, as protesters, media, and curious observers strolled through the occupied block.

Wong Yeung Tat, the founder and leader of Civic Passions, a nativist political group, said that he had set up a gazebo to hold water and supplies for the protesters. “We supported this movement from the start,” he said. “Our tent is to let people calm down, give them some support, and water.”

Alex Lam, a retailer, surveyed the jewelry stores surrounding the site, which cater mainly to tourists from the mainland. “This shows the sickness of Hong Kong,” he said. “The way this street is now relates to government policy. The street has been turned into a place that does business for the mainland.”

A 22-year-old student, who only wanted to be known as Rob for fear of government retaliation in the future, back in Hong Kong after studying law in the United Kingdom, said that Mong Kok, although it took no orders from the student leaders, offered a useful role in the overall movement. “Diversity is important, because if they all fall under the same umbrella, then the students can use us as a bargaining chip.”

He predicted that the other side of Nathan Road would eventually be overrun by protesters, as their numbers swell in the evening, after people are off work.

Of Leung Chun-ying, the chief executive, who yesterday promised to begin talks with students, Rob remarked: “He has a press conference, and the same night he suddenly clears Mong Kok. A hell of a bastard that guy. How can you expect we believe you’re sincere if you’re doing that?”