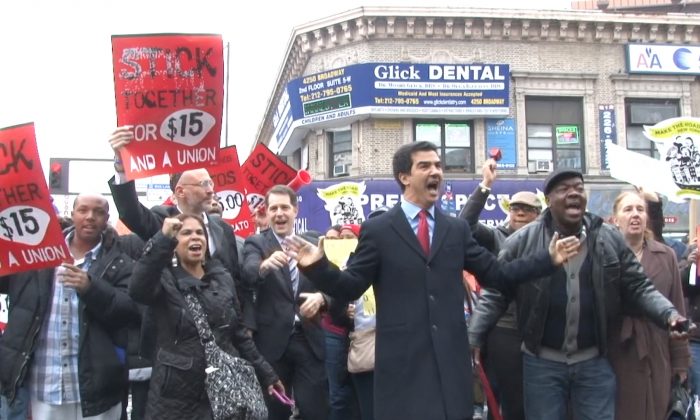 Matt Gnaizda
Matt Gnaizda is a multimedia journalist who shoots video, writes, edits, and produces programming for New Tang Dynasty (NTD) Television and its media partner, Epoch Times. He has traveled to more than 20 countries and currently lives in Brooklyn, New York. As a journalist for more than a decade, Matt has covered a wide variety of topics, but has a special focus on Chinese politics, economics, and human rights.
View profile
Follow
biggersmaller
Print

NEW YORK—For Alba Santana, earning $7.60 an hour at McDonald’s is not enough. She also has to work a second job at a local pharmacy to make ends meet.

“It’s like a lot of work and no pay,” said Santana, who was part of a protest outside the McDonald’s where she works in Manhattan. “So that’s why I’m here today.”

The minimum wage in New York State is $7.25 per hour. Many workers at McDonald’s restaurants like this one on 181st Street and Broadway earn minimum wage or only slightly more. Nationwide, the average industry salary is about $9 per hour.

At the McDonald’s on 181st Street, things got rowdy. Protesters forced their way past the security guard into the restaurant, where they overwhelmed staff and customers alike. City Council member Ydanis Rodriguez held the door, waving protesters to enter.

The protests in New York City were just a few of the 100 similar protests across the United States Thursday.

Starting in November 2012, there has been a series of nationwide protests campaigning to raise the minimum wage for fast-food workers to $15 dollars an hour. It would be more than double New York state’s minimum.

After searching the crowd of protesters for workers to interview, this reporter found only a handful who currently worked at McDonald’s. It appeared most protesters were not fast-food workers at all. The building service workers union was there, and so were more than a dozen undocumented immigrants, an organizer for Make the Road New York said.

It shows that the protesters have a larger support base. But even so, it has been hard to get fast-food restaurants to raise wages.

That’s partly because franchise owners operate their own individual restaurants, and pay whatever wages they deem appropriate. Often, they pay entry-level workers their state’s minimum wage.

McDonald’s CEO Donald Thompson earned $13.8 million in 2012. But there is no material support at a corporate level for higher wages at the bottom end.

“Those low wages have a cost,” Stephanie Luce, an associate professor of labor studies at CUNY, told the Epoch Times on Oct. 15. “And it is sometimes a hidden cost.”

More than half of fast-food workers nationwide rely on public assistance programs like food stamps to fill the gap between their work income and living costs.

A recent study by UC Berkeley and the University of Illinois found that these workers and their families are costing U.S. taxpayers $7 billion a year. McDonald’s alone accounts for $1.2 billion of that—or the equivalent of 78 cents for each McDonald’s hamburger Americans eat.

But for workers like Alba Santana, her pay still isn’t competitive enough to make ends meet.

“I need help to pay my rent,” said Santana.

On top of that, she said, her McDonald’s manager is unhappy with her involvement in the protests. She claims that after her first protest (this was her third), her manager reduced her working hours from 40 down to about 30, and did so for other protesting employees as well. After that, the manager hired new full-time workers who took her old shift. Her manager was present at the restaurant Thursday, but refused to confirm or otherwise comment.

Santana hopes McDonald’s will see the value of higher wages and pay her $15 an hour, so she can quit her second job.

Matt Gnaizda
Follow
Matt Gnaizda is a multimedia journalist who shoots video, writes, edits, and produces programming for New Tang Dynasty (NTD) Television and its media partner, Epoch Times. He has traveled to more than 20 countries and currently lives in Brooklyn, New York. As a journalist for more than a decade, Matt has covered a wide variety of topics, but has a special focus on Chinese politics, economics, and human rights.