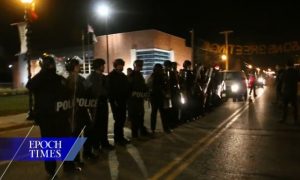 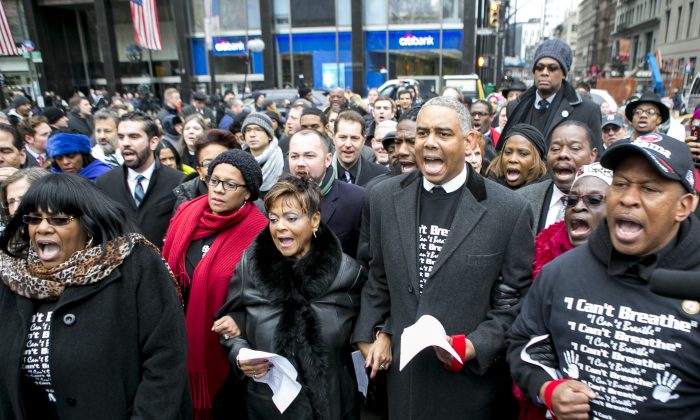 At least 30 people laid on the ground, playing dead, as a Stated Meeting went on inside. The protesters had made their way successfully through building security while holding their hands up as a sign of solidarity with Michael Brown, the 18-year-old black man shot dead by white police officer Darren Wilson, in Ferguson, Mo. Wilson was not indicted by the St. Louis grand jury for murder.

Monday afternoon’s small protest in downtown Manhattan was just one of hundreds erupting all over the country protesting racial injustice and police brutality.

They sang classic gospel songs, such as, “Ain’t Gonna Let Nobody Turn Me Around” and “We Shall Overcome,” and prayed.

“The city council men and the Black and Latino Caucus walked out. We didn’t know they were going to do that,” said Rev. Jacqueline Lewis, a senior minister at Middle Collegiate Church on the Lower East Side. “But there’s something happening that’s different—it’s like we’re at a tipping point in America.”

Maybe racism would end as a result of these protests, said Lewis.

The events of Ferguson and even the death of Eric Garner, who was black, in Staten Island from a chokehold by a white police officer, have been followed by the council members. In response, they have proposed bills aimed at reforming police conduct, such as one that would ban the chokehold and another that would require officers to ask permission before searching a suspect.

Both bills are still pending review, but have faced little opposition.

Although, critics felt that requiring officers to ask permission before searching a suspect would restrict the police force and create additional obstacles in policing crime.

Lewis disagreed with such opposition. “The police can’t police themselves,” she said.