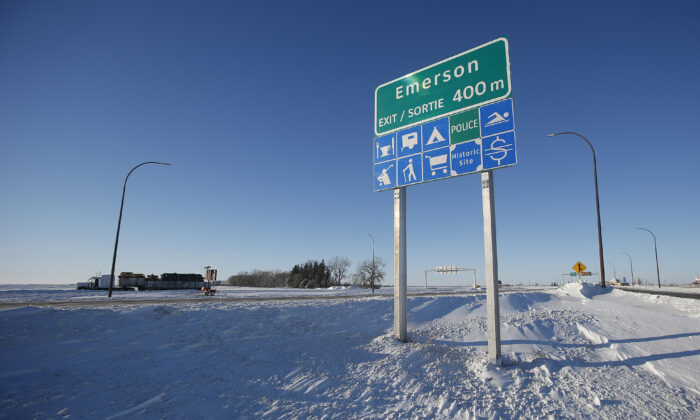 A vehicle convoy has blocked a major Canada–U.S. border crossing in Manitoba as demonstrators protest in solidarity with the Freedom Convoy truckers in the Canadian capital of Ottawa.

“A demonstration involving a large number of vehicles and farm equipment is blocking the Emerson Port of Entry,” Manitoba RCMP said in a post on Twitter on Feb. 10.

Both northbound and southbound traffic has come to a standstill, the police said.

A demonstration involving a large number of vehicles & farm equipment is blocking the Emerson Port of Entry. No traffic is getting through either northbound or southbound. The Port of Entry is shut down. Please avoid the area. #rcmpmb is on scene. pic.twitter.com/SpKzwzMfKZ

There have been several blockades of border crossings between Canada and the United States in recent weeks. In addition to Emerson, protesters also have blocked the highway to the Coutts border crossing in southern Alberta and the Ambassador Bridge connecting Windsor, Ontario, and Detroit.

The protests are in solidarity with the ongoing truckers’ convoy movement in Ottawa, which was formed to oppose federal COVID-19 vaccine mandates and restrictions.

The Alberta protesters have closed and opened the lanes of Highway 4 on and off since Jan. 29. The RCMP said late on Feb. 8 that the lanes were again closed due to the protest.

Protesters in Windsor began gathering at the Ambassador Bridge on Feb. 6. As of Feb. 10, the border remained blocked.

On Feb. 10, Windsor police said on Twitter that while the U.S.-bound lane is open, the presence of demonstrators is still “making it difficult to access the bridge.” They said potential traffic congestion along Wyandotte St. West near the bridge could also result in delays.

On Feb. 9, protesters in southwest Ontario also blocked a major crossing to the United States. Lambton police said westbound Highway 402 leading to the Blue Water Bridge has been blocked, and the portion between Nauvoo Road and Oil Heritage Road remained closed early on Feb. 10.

The trucker protest movement in Canada initially started as a demonstration against the federal government’s requirement for truck drivers to be vaccinated for cross-border travel but has since expanded in scope to demand an end to all COVID-19 mandates and restrictions. Supporters from across the country have joined the movement, and parallel protests have been sparked in other countries around the world.

Convoys of trucks and other vehicles headed to Ottawa in January, converging on Parliament Hill on Jan. 29. Many protesters have remained in the nation’s capital, saying they will stay until the government removes all COVID-19 mandates.

Issac Teo contributed to this article