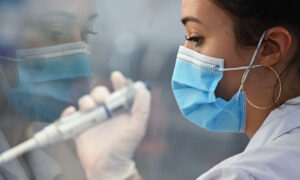 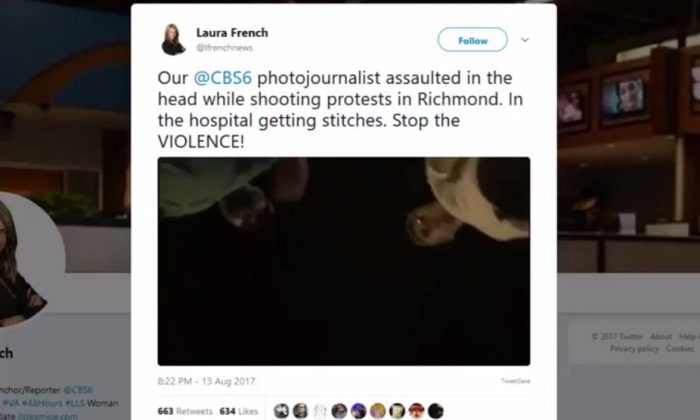 Protesters Attack CBS Journalist in Richmond; He Gets Staples

A CBS affiliate journalist was reportedly attacked in Richmond, Virginia, by a protester on Sunday night—in the aftermath of the deadly violence in Charlottesville.

The journalist, who was not working for the station when the incident took place, used his phone to record a crowd of demonstrators with signs protesting “against white supremacy.”

CBS 6 posted a video of the incident.

It showed demonstrators marching and chanting.

“Stop filming,” one person said before the journalist’s phone was apparently knocked down.

CBS 6 reported that the journalist was hit in the back of a head with a stick, necessitating him to go to the hospital to get 4 staples in his head.

It’s unclear if the protesters belonged to ANTIFA, which has been criticized for fomenting violence at protests—namely at universities—across the United States. However, some of the banners held by protesters appear to have ANTIFA text and logos.

It comes a day after James Fields Jr., 20, allegedly rammed his car into a crowd of protesters in Richmond, Virginia, killing one person and injuring scores more.

They were counter-protesting a white nationalist rally in Charlottesville.

Fields appeared in court on Monday and didn’t enter a plea. He is being charged with second-degree murder.


Weimer described him as respectful of others, but had “radical ideas” on race. News outlets on Sunday reported that the lone fatality in the car crash was a woman, 32-year-old Heather Heyer, who worked as a paralegal.

Here is another version of the video: