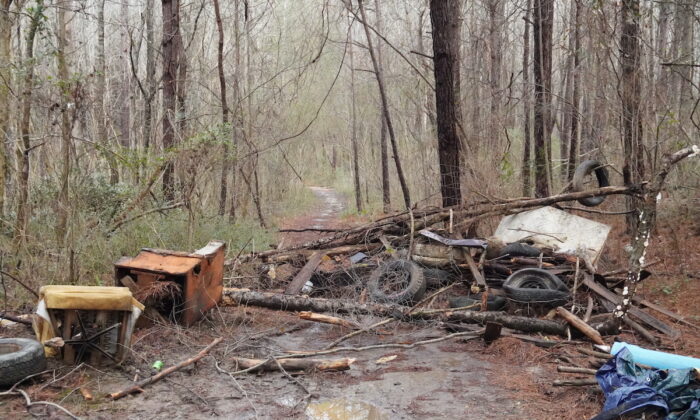 On Jan. 18, agents with the Georgia Bureau of Investigation (GBI) “along with other law enforcement partners, conducted an operation to identify people who are trespassing and committing other crimes on the property,” according to a GBI press release.

As officers were moving through the property, they located a man inside a tent in the woods, according to the statement. “Officers gave verbal commands” to Manuel Teran, also known as Tortuguita, but “he did not comply,” GBI officials said.

Teran, 26, then shot a Georgia State Patrol officer, according to the GBI.

Other officers returned fire, hitting Teran, who died at the scene. The trooper was transported to a local hospital, where he underwent surgery.

The GBI provided pictures of Teran’s gun and showed its ballistics matched the bullet that hit the officer.

On Peachtree Street, they smashed windows on Truist bank, Wells Fargo bank, and the building that houses the Atlanta Police Foundation. They set a police car ablaze and smashed another police vehicle’s windows.

The attack wasn’t the only reprisal for Teran’s death.

Activists in Seattle, Washington, also created graffiti while holding a vigil for Teran, according to the website of Puget Sound Anarchists, a radical group.

At a few places within the makeshift camp, barricades made of tires, trees, furniture, and other objects still blocked the paths through the forest five days after the shooting.

The Epoch Times found three unoccupied tents in the park, along with sleeping bags, backpacks, and banners roped high in the trees.

One area of the forest had a small shelter of woven branches.

One tent appeared to have been cut open during the police raid. Another lay on the ground.

Most noticeable was a plethora of graffiti throughout the forest. Man-made surfaces from the forest’s entrance to a tunnel about a half-mile away had become a canvas for painted tags, slogans, and symbols of anarchists, environmentalists, socialists, anti-capitalists, and Black Lives Matter.

“Forest defense is self defense,” another read.

“We will tell them,” a paper with song lyrics read, “that Weelaunee is not for franchise and wish the [expletives] drop down dead.”

Weelaunee is the American Indian name for the Atlanta Forest.

Life and Death in Weelaunee

A memorial near the park’s entrance celebrated Teran’s life.

“Erected in memory of all those whose lives were lived and unjustly lost in Weelaunee Forest,” read a message written on a concrete slab propped up vertically and spray-painted gold.

“You live on in the trees and are remembered by the land. You will never be forgotten.”

The camp’s remains show that occupants seemed to have lived well before the deadly encounter with law enforcement.

The camp also had a fire pit and logs arranged to mark paths. A bucket in a pit, covered by a foam sheet, may have served as a latrine.

Mortar-style fireworks, multiple-edged weapons, pellet rifles, gas masks, and a blow torch were recovered by law enforcement officers, according to the GBI.

From Upper Crust to Forest Huts

Seven people, ages 20 to 35, were arrested and charged with domestic terrorism and criminal trespass, with additional charges pending; all of them came from other states, according to the GBI.

Many of those arrested come from backgrounds of wealth and cultural achievement.

One graduated from a prestigious college and wrote an article for American Scientist magazine.

Another comes from a millionaire family who sails yachts and owns a mansion.

A third is an award-winning clarinet player who studied at a famous music institute.

Another serves in a leadership role at a Chicago climate change think tank.

They’re all believed to have participated in a riot that resulted in burned police cars and smashed glass fronts of several businesses.

On Jan. 18, law enforcement officials removed 25 dwellings, including tree houses, from the forest camp, according to the GBI press release.

Defend the Atlanta Forest, an activist group that played an important role in the decentralized movement that occupied the forest, posted a statement on its website saying the raid was “the most recent of a series of violent police retaliations against the movement.”

“The official narrative is that Cop City is necessary to make Atlanta ‘safe,’ but this brutal killing reveals what they mean when they use that word,” the statement reads.

The Defend the Atlanta Forest website also states that “no one has been harmed by participants in this movement.”

It also states that rather than looking at “violent and nonviolent methods,” it divides its protests into a “much simpler and more intuitive framework: defense and offense.”

“The chief benefit of this framework is that it allows protesters to focus on the strategies and approaches that feel safe, dignified, and comfortable for them,” the website reads.

Before the Jan. 18 raid, law enforcement agencies conducted a joint operation to “combat ongoing criminal activity” in the forest about a month earlier, another GBI press release noted.

In that raid, they removed barricades and found explosive devices, gasoline, and road flares, the release said.

The forest’s inhabitants threw rocks at officers, according to the statement. Police arrested five of them, four of whom came from out of state.

Residents in a nearby neighborhood declined to speak with an Epoch Times reporter about the impact of the forest camp.

Although The Epoch Times asked for comment from employees of several local businesses, many said they’d been instructed not to speak.

Alex Swanson, a bartender at Meehan’s Public House, said rioters passed through the area quickly. While at work, Swanson saw the group of about 150 people break windows and move on.

These days, riots are just another part of living in Downtown Atlanta, he said.

“It’s unusual, but in the climate we live in, it’s like, protests happen,” he said.

When compared with the massive Black Lives Matter riots in 2020, the Jan. 21 riot wasn’t a big deal, he said.

“What happened Saturday was a small scale compared to anything that happened” in 2020, he said. “It was more intense because it was way more people, and it was a larger protest covering more area.”

Defend the Atlanta Forest’s website has a long list of endorsements from organizations, including the National Lawyers Guild and several of its branches; the climate change group Rising Tide North America; the climate change group 350.org; several chapters of both the Democratic Socialists of America and Showing Up For Racial Justice; organizing group Shut Down DC; the Savannah Federation of Democratic Women; several armed left-wing John Brown Gun Club chapters; Atlanta Antifascists; and several Antifa chapters.

Defend the Atlanta Forest didn’t respond to a request from The Epoch Times for comment.