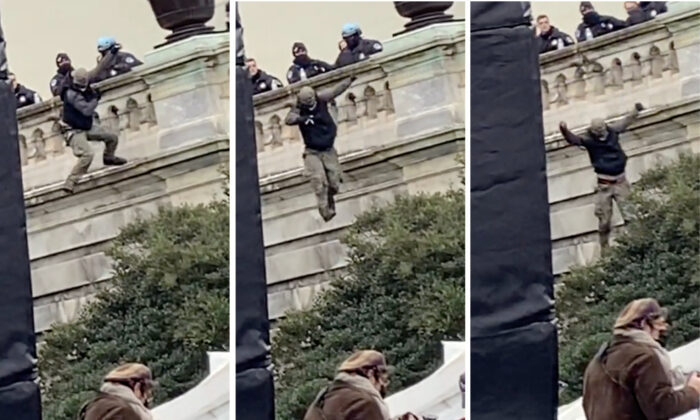 Derrick Vargo falls some 20 feet after being allegedly pushed off a landing that leads to the Upper West Terrace at the U.S. Capitol on Jan. 6, 2021. (Video Stills/ParlerVideos)
US Features

Derrick Vargo, 32, identifies himself as victim shown in online video, says he will sue police for his injuries
By Joseph M. Hanneman

The protester who was allegedly shoved by a police officer off a ledge near the U.S. Capitol on Jan. 6, 2021, identified himself for the first time on Feb. 22 and said he plans to sue the police for attempted murder.

Before Feb. 22, Derrick Vargo was the unnamed subject of a video in which a police officer appears to push him off a 20-foot-high ledge, plunging to what many assumed was a tragic death.

Nearly 14 months later, Vargo and his attorney announced a forthcoming civil suit against the U.S. Capitol Police for his serious injuries and mental trauma caused by the push and fall.

Vargo, 32, who works as a yacht builder in Tennessee, said he has no doubt the motorcycle officer who pushed him did it with the intention of hurting or killing him.

“He knows exactly where he was on that Capitol building. You know, he works there,” Vargo told The Epoch Times. “He’s not just a citizen. He works there. He knows how high up he is. He shoved me not with just one arm but two. That means he wanted me off of it. It was very intentional.”

The U.S. Capitol Police (USCP) didn’t respond to a request for the identity of the officer and whether the incident has been investigated.

Vargo’s case is the latest allegation of police brutality and misconduct during the protests at the Capitol on Jan. 6, 2021. It brings the number of cases to at least seven, with victims, relatives, friends, and witnesses alleging police brutality or misconduct caused serious injuries and deaths.

Vargo said he’s left to ponder what kind of country this has become, where an assault caught on video and posted online causes little hue and cry, or even an investigation.

“What do I think of what happened to me that day? Horrible. I mean, it’s attempted murder.”

“The officer’s reaction, his inclination to push him nearly to his death, is morally wrong, it is criminal, it is illegal,” McBride told The Epoch Times. “He needs to be held accountable for his actions. Because the moment Derrick hit the ground, he was never again going to be the same.”

McBride reiterated the call he made in other cases involving Jan. 6 clients, that a special prosecutor needs to be appointed to investigate alleged police brutality at the U.S. Capitol.

“There needs to be a neutral and detached special prosecutor, one who has no horse in this race other than the objective search for truth and justice,” McBride said. “Wrongdoers need to be held accountable.

“There is no justification under the sun for out-and-out police brutality, never mind police brutality that ends up in death or serious injury, as we have seen multiple occasions that day,” McBride said. “Several people died through police negligence and/or police brutality and/or murder.”

McBride was referring to the killing of Ashli Babbitt by USCP Lt. Michael Byrd, the beating of Rosanne Boyland by Metropolitan Police Department officer Lila Morris, and the beating of Victoria White by an as-yet-unidentified DC Metro police commander who struck her more than 40 times with a steel baton and his fist.

Putting Up a Flag

Vargo said he traveled by bus from Ohio to Washington to hear President Donald Trump speak at the Ellipse on Jan. 6, 2021. After the speech, he followed crowds to the Capitol, where he observed a man atop one of the scaffold structures erected for the presidential inauguration.

“He’s at the top of it with the American flag, just waving it. Everyone’s going nuts. It was so inspiring,” Vargo said. “I can’t explain it. It’s something I’ve never seen in my life. But being there when that was going on, it was humbling.”

The sight inspired him to find a spot to wave the Trump flag he bought on the walk from the speech.

“For the sake of getting my flag up there and waving it too, that’s all I wanted to do,” he said. “No, I don’t want to go in [the Capitol], and don’t want to hurt anybody. I literally just want to put my flag up, just like the guy with the American flag.”

Because police and protesters had crowded the stairs under the scaffolding that led to the Upper West Terrace, Vargo decided to scale the wall to reach the landing, away from the scuffles.

“I don’t want to go up the steps because everybody’s pushing and trying to get through the cops,” he said. “I don’t want to touch cops. I want to be completely no trouble at all. So I was like, ‘All right, I’m going to just scale this the wall over here. And I’ll just put my Trump flag up there and I’ll wave it.’”

Video taken by media and bystanders shows Vargo climbing the narrow ledge on the outer side of the stone balustrade along the edge of the terrace landing. One police officer attempted to strike him in the head with a collapsible baton. He got sprayed in the back of the head with pepper spray.

“I want to put the Trump flag up, but I’m not trying to die,” Vargo said. “That’s when I decided I’m going to just get down. As I start to walk down, this officer, big dude, just both hands, shoves me real quick, real hard. And all of a sudden, I start falling.”

Video shows Vargo’s arms were stretched above him and his feet were poised to take the brunt of the impact. He heard wind whistling in his ears all the way down.

“I threw my arms up, grabbed some wind, and then as I came down, it was like toe tip, ankles—you know where your ankle bends and then your knee bends, your hips bend,” he said. “Then I threw my body forward and pulled in the middle of my spine. And from there, I just blacked out.”

On the way down, Vargo hoped he wouldn’t die, but prepared himself to suffer paralyzing injuries.

“Yeah, I might live,” Vargo recalled thinking. “I was like, ‘But I’m probably—definitely—going to be paralyzed.’ That’s what was going through my head as I fell. And if I didn’t have God in my heart, literally I’d be dead. I truly believe God had me fall in a way that I’m not only not dead, I’m not only not paralyzed, but I can still walk a little.”

The crowd at the bottom of the wall became angry at police after seeing Vargo shoved off the high perch, video shows. As bystanders rushed to give him first aid, others began shouting at police officers looking over the barrier above.

A police officer wearing a bicycle helmet made what the crowd took as mocking gestures with his hands and steel baton. He also made the figure of a gun with his thumb and index finger, video shows.

Bystanders and rescue personnel loaded Vargo onto a section of the type of bicycle rack that was used as barrier fencing throughout the Capitol grounds. They carried him out to a rescue squad.

After Vargo was carried off, the crowd shouted at police standing at the bottom of the terrace wall, video shows.

Video journalist Stephen Horn, who created a synchronized four-angle video composite of Vargo’s fall and posted it on Twitter, came on the scene just as Vargo was being loaded onto the improvised stretcher.

“When I arrived near the area where this man fell, I observed him laying on a piece of bicycle rack fence, surrounded by protesters and police, first responders providing medical aid, and journalists with their cameras,” Horn told The Epoch Times. “One of the individuals examining him said he had ‘broken legs; possible back injury.’ At the time, I was not aware of how he had sustained those injuries, but it was apparent that they were extremely serious.”

Horn said angry protesters then moved up the stairs toward the Capitol entrances.

“The police on that staircase retreated under a barrage of projectiles thrown from the same area the man had just been carried away through,” he said. “I followed the mob as they surged up the stairs, ultimately leading to the door and windows on the Senate wing of the Capitol, where the first rioters broke in.”

Vargo said that when he regained consciousness in the ambulance, he heard a disturbing radio transmission that still affects him.

Babbitt, who was unarmed, was shot in the left anterior shoulder as she climbed through a broken window outside the Speaker’s Lobby. The bullet caused extensive damage in her upper chest. She was pronounced dead at a hospital 30 minutes after being shot by Lt. Byrd. The medical examiner ruled her death a homicide, but no charges were brought against Byrd by the U.S. Department of Justice. Nor was Byrd censured or disciplined by U.S. Capitol Police.

Vargo suffered a fractured ankle and extensive mid-foot injuries that required surgeries to repair. Surgeons used a screw to hold his fractured ankle together. Plates and screws were used to repair two toes and mid-foot bones that suffered a Lisfranc fracture and dislocation.

Some of the hardware has been removed, but what remains causes Vargo constant foot pain. He also suffers pain in the middle of his spine. For the former Ohio all-state prep football star whose athletic pursuits have long included running, the lack of mobility is especially troubling, he said.

‘A Pep Talk from Hell’

Vargo also suffers from post-traumatic stress disorder that causes flashbacks and nightmares of the officer pushing him from the ledge. It’s a constant reminder. At least in his nightmares, he awakens before hitting the ground.

Vargo said he hopes the lawsuit gets answers about why police caused such harm in his case and others.

“I’m very angry,” he said. “I want that investigation, because, you know, if I had to describe that day, it was the definition of what our country is turning into if we allow it.”

“We’re talking about a good-looking, strong, super-active young American guy who enjoyed running and jogging and the gym, and hiking and different types of sports,” McBride said. “And that’s been taken from him. Because of that, we are going to seek the appropriate remedies to make him whole again.”

McBride said if Vargo slipped and fell on his own while climbing the wall along the stairs, that would have been on him.

“But if he gets up there to the top, and, posing no threat to anyone else, another human being approaches him and then pushes him nearly to his death, well, that’s attempted murder,” McBride said. “You can’t do that.”