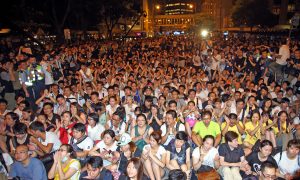 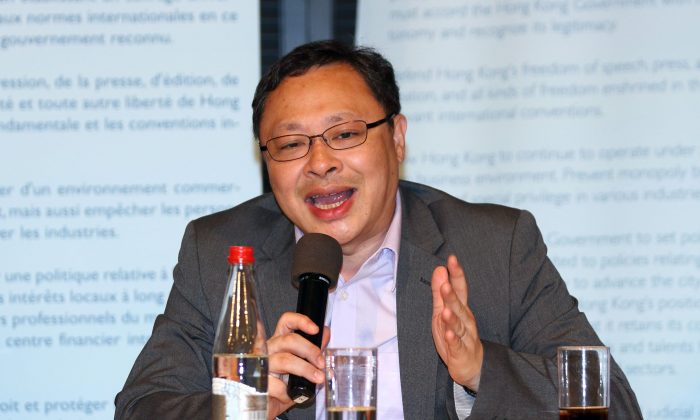 HONG KONG—If Hong Kong democrats do not like the Chinese regime’s decision on universal suffrage for the city-state, the nonviolent Occupy Central movement will take place soon, according to movement co-organizer Benny Tai Yiu-ting.

In an interview with Radio Television Hong Kong (RTHK) on Aug. 23, Tai said that many details need to be considered for the protest. He said they must not announce the location and time too soon, or the three organizers will be accused of conspiracy or incitement and could be arrested before the campaign begins.

The National People’s Congress Standing Committee (NPCSC) in China will discuss a report on Hong Kong’s political reform from Aug. 25-31 and then announce the method for selecting the 2017 Hong Kong chief executive. Tai said if the NPCSC’s decision does not meet international standards, the protest will be launched.

Recently Li Fei, deputy secretary-general of the NPCSC and chairman of Hong Kong’s Basic Law Committee, met Hong Kong lawmakers in Shenzhen city in China during a two-day seminar on political reform. Li holds a hardline stance that Beijing does not accept civil nomination, meaning that Hong Kongers could not directly nominate the candidates for chief executive. Under the current structure, a group of 1,200 people representing four sectors of society forms the nominating committee that chooses the chief executive candidates.

Li said the candidate for chief executive must be patriotic and love the country of China as well as Hong Kong. He also said opposing Beijing will cause social unrest.

Tai criticized Li’s remarks in a public forum, saying that if the NPCSC fixes the framework of universal suffrage, it reflects Beijing’s distrust towards the Hong Kong government.

Tai added that he was heavy-hearted because Li’s remarks are the sharpest criticism of the Occupy Central movement from Beijing officials. He thinks Li does not understand the original intention of the movement.

Democratic organizations such as the Hong Kong Federation of Students (HKFS), the Civil Human Rights Front (CHRF), and some pan-democratic LegCo members have declared their support of Tai. This includes mobilizing a students’ strike and vetoing the false universal suffrage method during LegCo meetings.

Joseph Yeung Ching-yin is the convenor of the CHRF, which holds an annual protest in Hong Kong on July 1. Yeung said the CHRF, HKFS, Scholarism, the Alliance for True Democracy, and the Democratic Party will take action when the NPCSC announces its decision on political reform.

Yeung said they would work together to fully mobilize citizens for Occupy Central and arrange pickets to keep order in the streets.

HKFS secretary general Alex Chow Yong-kang said the HKFS would launch a students’ strike in September and a series of civil disobedience movements.

LegCo member Lee Cheuk-yan said if the NPCSC leaves no room for negotiation, the pan-democrats will veto the false universal suffrage plan and join Occupy Central.

Hong Kong Basic Law committee member Lau Nai-keung said the central authorities consider the political reform a fight over Hong Kong’s jurisdiction, so Beijing will not compromise at all. Lau said Beijing is expecting Occupy Central to happen, and the worst scenario is that “one country, two systems” will cease to exist in Hong Kong.

Under “one country, two systems,” Hong Kong is promised a degree of autonomy from mainland China and the Chinese Communist Party (CCP).

Lau said if Occupy Central takes place, the city will be in a state of emergency, and the national laws of China will take effect in Hong Kong. In that case, there will not be two systems anymore.

He added that the Basic Law and the Garrison Law state that the Hong Kong chief executive can seek assistance from the CCP’s People’s Liberation Army (PLA) Garrison. This assistance does not mean that the PLA would help arrest protesters, but the Garrison could provide jails when Hong Kong’s prisons are not enough to detain all the protesters.