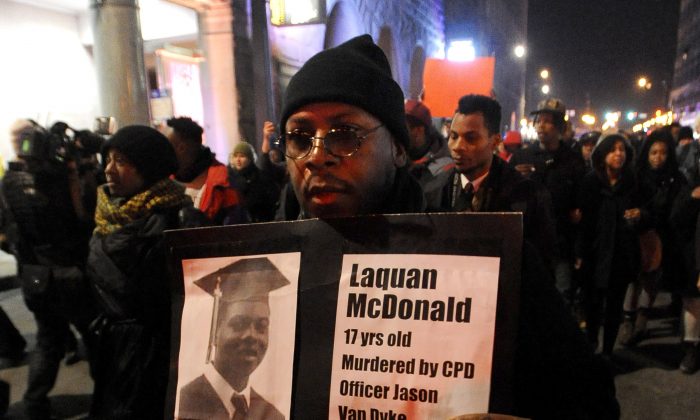 A protester holds a sign as people rally for 17-year-old Laquan McDonald, who was shot 16 times by Chicago Police Department Officer Jason Van Dyke in Chicago, on Nov. 24, 2015. (AP Photo/Paul Beaty)
US

CHICAGO—Hundreds of protesters blocked store entrances and shut down traffic in Chicago’s ritziest shopping district on Black Friday to draw attention to the 2014 police killing of a black teenager who was shot 16 times by a police officer.

Demonstrators stood shoulder to shoulder in a cold drizzling rain to turn the traditional start of the holiday shopping season on Michigan Avenue’s Magnificent Mile into a high-profile platform from which to deliver their message: The killing of 17-year-old Laquan McDonald—captured on a squad-car video made public earlier this week—was another example of what they say is the systemic disregard police show for the lives and rights of black people.

They chanted “16 shots! 16 shots!” and stopped traffic for blocks to express their anger over the Oct. 20, 2014, shooting and the subsequent investigation, which they say was mishandled.

While shoppers continued to make their way along sidewalks and the empty street, some major retailers were forced to close, at least temporarily. Among them was the typically swamped Apple store, where dozens of employees in red shirts stood in an otherwise empty two-story space and watched through store windows as protesters linked arms to stop anyone from entering.

It was the largest demonstration in Chicago’s streets since police on Tuesday released the video under a court order to make it public.

The footage shows McDonald jogging down a street and then veering away from Officer Jason Van Dyke and another officer who emerge from a police SUV drawing their guns. Within seconds, Van Dyke begins firing. McDonald, who authorities allege was carrying a three-inch knife and was suspected of breaking into cars, spins around and falls to the pavement as Van Dyke keeps shooting.

Frank Chapman, 73, of Chicago, said the video confirms what activists have said for years about Chicago police brutality.

“That needs to end,” Chapman said. “Too many have already died.”

Chicago police blocked off roads to accommodate the march down Michigan Avenue, and officers in some areas formed a barrier of sorts between protesters and stores and helped shoppers get through the doors. But protesters succeeded in blocking main entrances on both sides of the street for more than three blocks.

When one person tried to get through the front door of Saks Fifth Avenue, protesters screamed at him, shouting, “Shut it down! Shut it down.” Entrances were also blocked at the Disney Store, the Apple Store, Nike, Tiffany & Co., and Neiman Marcus, among others.

Several protesters were seen lying face-down on the ground in handcuffs. A police spokesman says there were three arrests during the demonstration, two of them traffic related and the third resulted from a battery, but he didn’t elaborate.

Shoppers seemed to take the disturbance in stride, with some even snapping photos of the crowd.

“Honestly it’s the cold that’s likely to scare us away first,” said Christopher Smithe, who was visiting from London with his girlfriend.

With the rain and the protests, there seemed to be less foot traffic than on a normal Black Friday, said John Curran, vice president of the Magnificent Mile Association, which represents 780 businesses on North Michigan Avenue.

“The storefronts that were blocked by the demonstrators certainly had an impact on some of the businesses,” he said.

Throughout the week, protesters have expressed anger over the video of the shooting. They’ve also harshly criticized the department for its months-long effort to prevent the video from being released and the state’s attorney’s office for taking more than a year to file charges against Van Dyke, despite having footage of the incident.

All previous marches have been largely peaceful. There have been isolated clashes between police and protesters, with about 10 arrests and only a few minor reports of property damage.

Van Dyke is being held without bond. His attorney said Van Dyke feared for his life when he fired at McDonald and that the case should be tried in an actual courtroom, not the court of public opinion.