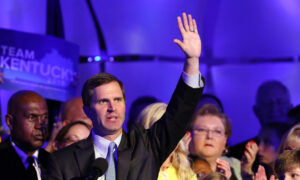 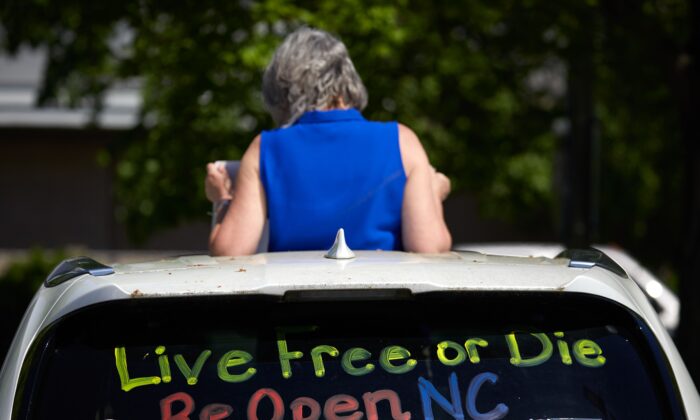 Administrators of the ReOpen NC Facebook page that started on April 7 and grew into a grassroots protest, were arrested on April 28 for defying the state administration’s lockdown measures.

Ashley Smith, 33, of Morgantown, one of the three admins of the ReOpen NC Facebook group was arrested on Tuesday after she got on the sidewalk of Gov. Roy Cooper’s mansion.

“Police told protesters not to get on the sidewalk,” Ashad Hajela, a local reporter with the News Observer shared on Twitter from the site of the third protest in Raleigh.

Smith along with Wendy Macasieb, and Lisa Todd were arrested for violating executive order 121, attending a mass gathering, for not maintaining social distancing when asked, and for resisting an arrest, reported WBTV.

The fourth detainee, Jonathan Warren II was arrested on an extra charge of damage to property. All three women were released by 6 p.m. the same day. The Epoch Times tried to contact Smith but didn’t receive a response by the time of publishing this report.

“Our protests will continue. Our civil disobedience will accelerate. Our faith in the police has diminished. We will open North Carolina,” Smith said in a statement, according to WBTV.

The ReOpen NC Facebook group in three weeks has grown into a 68,000 member community: “We stand for The Constitution. We are mostly business owners and employees that are losing our income and denied our right to provide for our families. We have come together to demand action from their elected officials”.

“Gov. Roy Cooper’s Executive & Emergency Powers must be reined in as they have directly denied citizens of North Carolina the right to life, liberty, and the pursuit of happiness. Rights endowed by our Creator,” the protestors said in their petition that’s signed by over 12,500 people.

Protestors signing the petition said that the lockdown has crippled their life. “I’m a small business owner, unable to collect unemployment, and this overzealous shutdown is destroying my business and life,” said Karl Eisenhauer on Change.org

Another protestor, Josie Von Krusze said: “Please reopen our state!! All businesses are essential!! They feed our families!!”

ReOpen NC Facebook page’s another administrator, Audrey Whitlock in a post earlier had described herself as “an asymptomatic COVID19 positive patient” and had said that her two week quarantine period was ending on Sunday.

“A typical public health quarantine would occur in a medical facility,” Whitlock said in her post, according to Fox News. “I have been told not to participate in public or private accommodations as requested by the government, and therefore denied an amendment right to freedom of religion.”

Whitlock argued that her first, fifth, and fourteenth Amendment rights were violated. “It has been insinuated by others that if I go out, I could be arrested for denying a quarantine order,” she said.

“However, the Americans with Disabilities Act prohibits discrimination by employers, places of accommodation, and state and local government entities. … Where do we draw the line?”

Cooper extended the lockdown imposed till April 30 to at least May 8 after which the state will gradually start re-opening its economy.