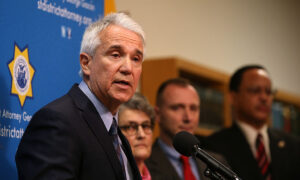 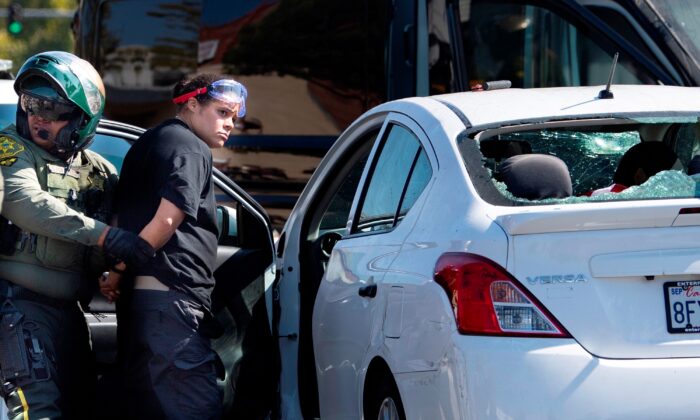 Tatiana Turner is taken into custody after witnesses said she drove her car into a crowd of protesters in Yorba Linda, Calif., on Sept. 26, 2020. (Mindy Schauer/The Orange County Register via AP)
Southern California

A 40-year-old woman charged with attempted murder for allegedly driving her car into protesters at a September rally is facing additional charges after authorities discovered she allegedly used a deadly weapon to attack two men at an earlier event in Orange County, California.

Tatiana Rita Turner, a Black Lives Matter supporter and protest organizer from Long Beach, has now been charged with 13 felonies for the two attacks, according to the Orange County District Attorney’s Office. The DA announced the latest charges, involving an August protest in Seal Beach, on Jan. 20.

“We support the right to peacefully protest, but these are not peaceful protests,” said Orange County District Attorney Todd Spitzer in a press release. “These are organized protests that encourage others to engage in civil disobedience and violence. We continue to review all surveillance footage to identify other suspects, regardless of what side of an issue they are on.”

Turner allegedly beat two men repeatedly on Aug. 29 with a four-foot-long metal rod as they were lying on the ground in Seal Beach, after a group of protesters had already beaten them up. The attack was so brutal that one of the men required staples in his head.

The charges associated with this incident are two felony counts of assault with a deadly weapon, including one causing great bodily injury as a result of the incident.

On Sept. 26, Turner allegedly drove her vehicle through a crowd in Yorba Linda that was counter-protesting a “March 4 Equality” event—one that she helped organize. In the attack, Turner is accused of running over a woman’s head and back, as well as breaking a man’s leg.

Turner faces a maximum sentence of seven years to life plus 26 years in state prison if convicted on all charges, according to the press release. She has previous convictions for domestic violence and selling drugs.

After reviewing video footage for months, five other people are facing criminal charges for the protests, according to the DA’s Office—including Danielle Lindgren, the woman run over by Turner’s vehicle.

After being hospitalized for several months, Lindgren was charged with one misdemeanor count of possessing a baton.

The other four have been hit with charges including carrying a baton, using tear gas on others, and failing to disperse at the scene of a riot.

“The Orange County District Attorney’s Office will prosecute anyone using force or unlawful intimidation tactics against any person or group.  Individuals who engage in violent and unlawful behavior in Orange County, regardless of their political or organizational leanings and associations, will not be tolerated and will be held accountable to the fullest extent of the law,” Spitzer said.

“The outrageous crimes committed recently by rioters at the U.S. Capitol building betrayed the core principles of our democracy and are a stark reminder that as Americans we will not stand for violence and lawlessness, especially when it is shamelessly disguised as the freedom of speech.”