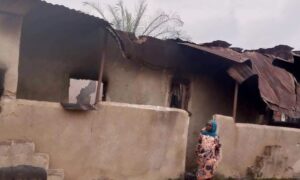 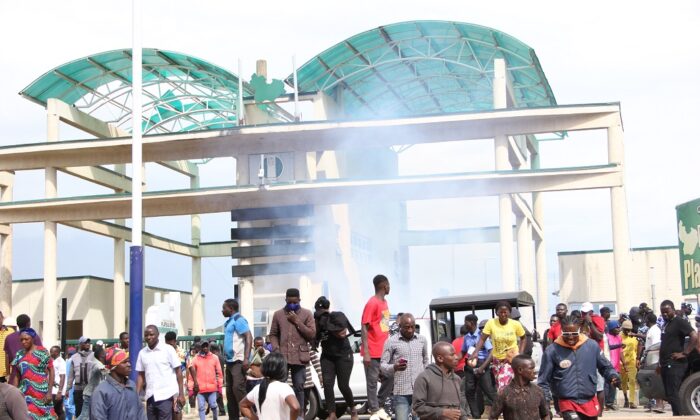 JOS, Nigeria—Citizens of Plateau state, Nigeria, sought to show the country’s lawmakers the end result of a recent terrorist attack on the region, hauling the bodies of victims to their front door.

They marched by the thousands on Aug. 25 to the Government House in Jos, the cosmopolitan capital of Nigeria’s northern states, beside flatbed trucks carrying the bodies of 36 Christians killed the previous day. The grisly mass murder was the latest in the growing number of sectarian killings in Plateau since mid-August.

The protestors wailed at the gates of the Government House for hours, alleging that the government had abandoned them to be wiped out by terrorists.

The city has been torn by killings since a mob attack in a northwestern suburb on Aug. 14 left 22 Muslims dead. The Muslims were attacked after being surrounded by a funeral march for victims of an earlier attack by Muslims on a Christian village. The latest attack raises the death toll to 81 since Aug. 14, counting both Christians and Muslims.

Muslim militias armed with AK-47s invaded Yelwan Zangam, a small Christian rural community three miles north of the University of Jos, on the evening of Aug. 24, killing anything that moved, according to Ajida Isa, a community leader who witnessed the incident.

Isa said the attackers spoke Fulfulde, the native dialect of the Fulani tribe that has been linked to thousands of killings in Nigeria. Sixteen members of his family, some as young as 5 years old, were burned to ashes in one house, while 20 others died by gunshots and machete cuts, Isa told The Epoch Times. The community was of the Anaguta tribe, which is Christian.

“I heard gunshots and thought it was somebody beating the door,” Isa said. “When it got louder, I said this couldn’t be a door sound. I told my wife and children to get out of the house while I checked. As I left them, I heard my son’s wife screaming. After a while, the screaming stopped and I knew she had been killed. I couldn’t come back to the house. I had to hide there.

“I heard them hitting the door and shattering windows. The next thing I saw was fire rising from the house. I had no clue my wife and children, as well as grandchildren, were inside with others who ran in as I left. I only came to find out that they had all been consumed by fire—16 of them.”

Two days before the attack, a single bridge linking the community to the larger city was destroyed, a week after a land dispute between the Christians and their Muslim neighbors, according to Isa.

“Less than two weeks ago, our youths were confronted by Muslims from the neighboring communities when they went to plant trees around our burial ground,” Isa said.

“Our Muslim neighbors claimed that the land belonged to them and therefore wouldn’t let us plant trees in it. We reported the matter to police and local government officials, and they summoned all of us for a peace meeting.

“The officials advised that we should stay peaceful, assuring the matter will be resolved. We were unable to meet again due to the sectarian violence in Jos, but the matter was still on, and two days ago we saw that the bridge was destroyed. We reported it again, not knowing there would be an attack.”

The attack was carefully planned, including the destruction of the bridge, “to deny security forces access to the area during execution,” Plateau state Gov. Simon Lalong said in a statement.

The destruction of the bridge delayed police from swiftly intervening during the attack, said Edward Egbuka, Plateau state commissioner of police.

“We received distress calls at about 8 p.m., and my area commander got there before 9 p.m., but they were unable to enter the village because the bridge was damaged,” Egbuka told The Epoch Times in Jos.

“They came down, but of course in that kind of situation you don’t just run in, you could be ambushed. By the time they moved in with the STF [Special Task Force, a joint command including police and military], the Civil Defense, and others, these idiots had perpetrated what they wanted and left.”

The police have arrested leaders of the Muslims in dispute with the Christian villagers as “first suspects,” according to Egbuka.

“We have arrested some leaders of the neighboring communities because they had had issues for two weeks,” he said. “And this issue was a small thing—nobody died. The security never expected this type of thing. The issue they had was on graveyard land. Nobody died. So we did not expect this type of action. … So for them to go back and do this, of course, they are the first suspects because they are the ones that quarreled with these people.”

Violence against Christians in Plateau state has persisted for years without federal intervention, according to Istifanus Gyang, the senator representing Plateau North in the Nigerian Parliament.

“The situation in Plateau is that of a people abandoned to their fate by the federal government,” Gyang said in an Aug. 15 statement. “I am gravely disturbed and outraged by the serial and continuing terror attacks on communities in Plateau state with thousands of lives brutally massacred over the years and still continuing.

“It is disheartening that Plateau people are targeted, isolated, and killed with no sympathy, no empathy, no attention nor relief to affected communities, no statement from the appropriate quarters,” Gyang said in the statement, issued by his spokesperson.

President Muhammadu Buhari’s response to the killings in Plateau and adjourning states of the Middle Belt has been cold, because they don’t affect Muslims, Gad Shamaki, the leader of the Jos protest march, told The Epoch Times by phone.

“If you look at it from Kaduna to Plateau, to Benue and other states of the Middle Belt, out of 10 attacked schools, nine are owned by churches. Out of 10 kidnap victims, nine are Christians. Out of 10 attacked communities, hardly would you find one that is not 100 percent Christian, and it shows clearly that there is an agenda that the president himself is a part of, since he cannot openly condemn or demonstrate the will to stop the attacks, despite billions of dollars allocated to defense annually.”

Kunle Olawunmi, a professor of global security studies, accused Buhari of having an agenda to Islamize Nigeria in an Aug. 25 interview with Channels TV.