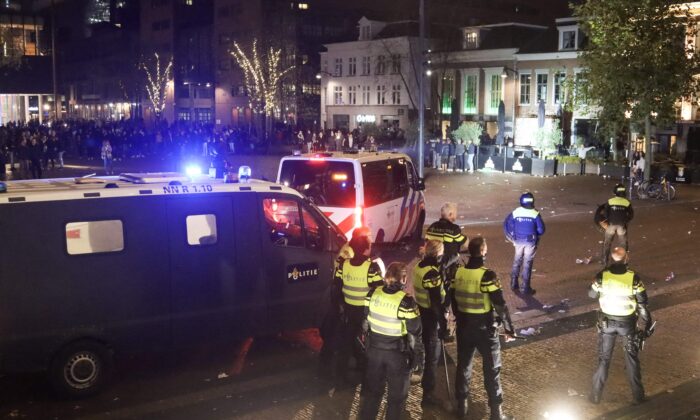 UTRECHT, Netherlands—Protests broke out in a northern Dutch city Saturday night as a new COVID-19 lockdown forced bars and restaurants to close at 8 p.m.

Dutch broadcaster NOS reported that hundreds of young people gathered in a central square in Leeuwarden, 140 kilometers (85 miles) north of Amsterdam. Video showed them setting off fireworks and holding flares billowing smoke. NOS reported that riot police later moved in to push the protesters off the square.

Elsewhere in the Netherlands, media reported that bars in the southern city of Breda remained open beyond the new lockdown mandated closing time.

“It is very difficult for me to accept” the lockdown, she said. “It is too bad and that’s something that spoils my social life as a student and the way I relax.”

Caretaker Dutch Prime Minister Mark Rutte announced the partial lockdown Friday and said it would run for at least three weeks, saying his government wants to “deliver a hard blow to the virus.”

The lockdown that began Saturday night is the first to start in Western Europe since a new wave of infections began surging across parts of the continent.

Another student, Kars Ausems, was disappointed the new lockdown came less than two months after the Netherlands largely ended restrictions at the end of September.

“I find it very annoying. Just now when we accustomed to an old way of life we must start all over again with restrictions,” he said.