Protesters Against Vaccine Mandates in NYC: ‘This Is a Turning Point’ 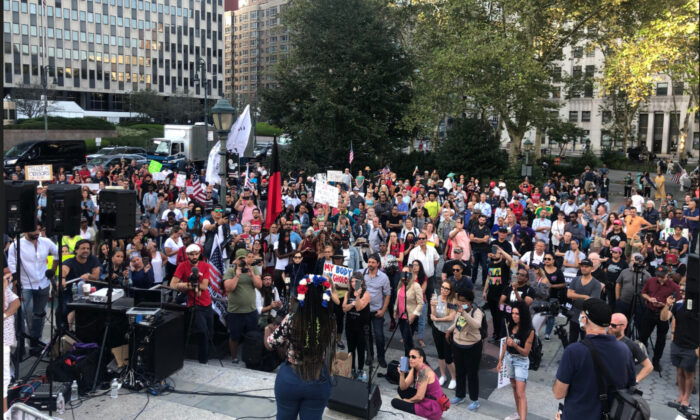 MANHATTAN, New York—New Yorkers gathered for the second time this month at Foley Square in Manhattan to protest vaccine mandates.

New York teachers and other Department of Education staffers were mandated to take the vaccine by city authorities.

The mandate was supposed to take effect on Sept. 27, but was temporarily blocked by a federal judge on Sept. 24. However, a federal appeals panel ruled in favor of the mandate hours before it was scheduled to begin.

The Epoch Times talked to some of the organizers of the protest.

“The movement is growing, my numbers of followers keep going up and I have more people contacting me, asking me for help,” said Jo Rose, co-organizer.

“It’s gonna continue to grow because there are people that are willing to lose their livelihood in order to keep their freedom.”

“We’re gonna bring more powerful people that I can’t name yet that are going to come [from] out of state to help us out here in New York.”

Kevin Peters, a co-organizer of the rally, believes that the vaccine mandates are not just about health.

“This is a turning point, a moment of truth for all of us. They’re really trying to push this agenda forward and more and more people are seeing, clear as day, where this is going,” Peters said.

“This is not just about health, it’s about control it’s about surveillance, its about tyranny, and restructuring our entire economy, health system, and education system.”

“Instagram is shutting us down, we had 17,000 people following us, and our account got shut down,” Peters added.

He said that they started a new Instagram account and bounced back in two weeks to 7 or 8,000 followers.

In a Sept. 25 statement, Gov. Kathy Hochul, a Democrat, said that the state might resort to using the National Guard members to replace health care workers who haven’t taken the COVID-19 vaccine.

“It makes you wonder if that was the plan all along,” he said.

Lisa Eden is an award-winning opera singer who said she suffered from a vaccine injury 23 years ago.

Eden told The Epoch Times that she has a bona fide medical exemption from a licensed physician from New York and can’t get the vaccine based on her previous medical condition, but the officials in charge of the opera houses and the unions didn’t take it into consideration.

“We basically were really held captive, this medical fascism has infiltrated every aspect of live performing arts, because all of the theaters for live entertainment were shut down. And I really believe that was part of the agenda to launch the passports. And so artists suffered greatly because we’ve literally been unemployed now since the beginning of this,” Eden said.

“A lot of artists, I believe, acquiesced because they’ve already been forced into unemployment. Whereas most other sectors were able to make accommodations to work from home, this kind of thing. We were literally forced into house arrest and weren’t allowed to work. ”

Last week, New York officials said that the state has no constitutional obligation to grant religious exemptions to the COVID-19 vaccine mandate for healthcare staff.