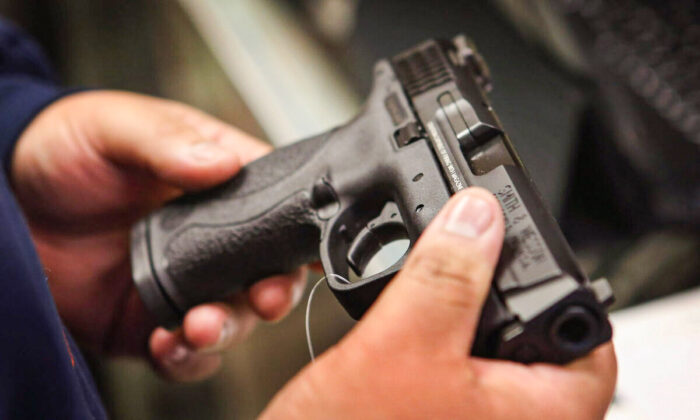 A customer shops for a pistol in Tinley Park, Illinois, on Dec. 17, 2012. (Scott Olson/Getty Images)
Viewpoints

Protection for Me, but Not for Thee

Far-left progressives in Canadian Prime Minister Justin Trudeau’s Liberal Party and the U.S. Democratic Party’s “Progressive Caucus” insist on being safe and secure, but also that you and me, all ordinary citizens, be precluded from safety, and remain, by law, vulnerable to attack and violation.

In Canada, Trudeau is initiating a legislative package that would ban the purchase, sale, or gifting of any and all handguns. Coming shortly after the elementary school shooting in Texas, Trudeau claimed that the ban was long in the works.

“There’s this sense that Canada responded to the shooting in Texas by suddenly turning around and banning guns. But we’ve been working on this for seven years,” he said. “We’ve had a lot of setbacks … but since we got elected seven years ago, we’ve been steadily working on strengthening gun control.”

However, Trudeau was quite explicit in contrasting Canada with the United States.

“We [in Canada] have a culture where the difference [from the United States] is: Guns can be used for hunting or for sport shooting in Canada—and there are lots of gun owners, and they’re mostly law-respecting and law-abiding—but you can’t use a gun for self-protection in Canada,” he said. “That’s not a right that you have in the Constitution or anywhere else.”

Trudeau’s focus in this gun control plan is on law-abiding citizens, not criminals who ignore gun laws or mentally disturbed individuals who act out violent fantasies. Even leaving aside the fact that many assaults and homicides result from the use of knives, fists, and random blunt objects, how does banning legal firearms for law-abiding citizens reduce the violence against law-abiding citizens?

But Trudeau goes much further. He insists that you aren’t allowed to defend yourself from violent attacks. It’s just not Canadian to defend yourself, he says. So if a criminal attacks a law-abiding citizen, that citizen is forbidden from defending himself or herself with a firearm.

“Just stay still and think of Canada,” Trudeau seems to be saying. Let me repeat what Trudeau is saying: “You can’t use a gun for self-protection in Canada; that’s not a right that you have in the Constitution or anywhere else.”

However, Trudeau himself is protected by a squad of Royal Canadian Mounted Police (RCMP). What do you think, are they armed?

According to LifeSite News: “An elite member of the special police unit tasked with protecting Prime Minister Justin Trudeau,” Daniel Bulford “is a trained sniper tasked with protecting Trudeau and other dignitaries, especially when they are in large, uncontrolled settings. In essence, his job is not unlike that of a member of the U.S. Secret Service that protects the President.”

So, Trudeau’s advice seems to be, “You aren’t allowed to protect yourself with a firearm; just let your very own RCMP bodyguard sniper protect you.”

Canada has become an increasingly authoritarian country, in which the socialist internationalists insist that individuals may not make decisions or act on their own, but must defer to the nanny state that dictates what’s good for them and what they must and must not do. This example is a model to which to aspire for the Progressive Caucus of the U.S. House of Representatives, and the many of its members of the “Democratic” Socialists of America.

The Democratic Party has gone even further than the Trudeau Liberals in Canada by declaring that not only should citizens not be able to protect themselves with firearms, but also that law enforcement arms of the state, such as the police, prosecutors, prison authorities, and judiciary, should be abolished so that citizens have no source whatsoever of protection from criminal attacks. Under the banner of “justice reform,” part of the radical “social justice” ideology, many Democrat “progressives” adopted the slogans “defund the police” and “abolish prisons.”

Many Democratic-run cities and states did just that; New York City, for example, slashed its police budget by a billion dollars.

According to the New York Post, in 2020, Reps. Rashida Tlaib (D-Mich.) and Ayanna Pressley (D-Mass.) sponsored The BREATHE Act.

“An overview of the BREATHE Act published online says it will slash federal funds to local police along with federal agencies, and spend the money on social welfare, health care, education, and environmental programs,” the NY Post reported.

“According to the online description, the bill would ‘Eliminate federal programs and agencies used to finance and expand the U.S. criminal-legal system, such as the Department of Defense 1033 [surplus equipment] program, the Edward Byrne-Justice Assistance Grant Program, Community Oriented Policing Services, the Drug Enforcement Administration, and Immigration and Customs Enforcement.’ It would preserve ‘non-punitive’ elements of each.”

The Daily Caller reported last year that the notoriously anti-police, far-left “Squad,” according to Federal Election Commission records, spent thousands of dollars on “security” or “security services.” Not just the Squad or “Progressive” Democrats, of course, but all Democratic city council members, mayors, legislators, and governors who in 2020 and 2021 drastically cut police funding and handcuffed them with regulations, had official police bodyguards and some also had private security.

Do you think any officials’ protection details were defunded or disarmed?

The United States, however, isn’t yet entirely under the thumb of authoritarian socialists. The U.S. Supreme Court, with a constitutionalist (or “originalist”) majority, last month struck down a New York state law that restricts and inhibits the carrying of handguns by requiring the demonstration of a special need, and backs that requirement with an elaborate bureaucratic procedure intended to deny applications.

“Surely no one really believes that ‘bearing arms’ in the Second Amendment was meant to restrict gun ownership to the home,” David Harsanyi wrote for PJ Media. “But New York’s gun restrictions demand that a law-abiding citizen beg permission from government officials, and then overcome a slew of subjective and discretionary standards, before being able to exercise a constitutional right. There is no historical or legal support for such restrictions. They are plainly authoritarian.

Note that the majority opinion explicitly recognizes the right to self-defense with a firearm.

Wrote Harsanyi: “Fearmongering Sen. Kirsten Gillibrand said the decision was ‘not just irresponsible but it is downright dangerous … This court has made it even easier for potentially dangerous people to carry concealed handguns in public spaces.’ House Speaker Nancy Pelosi claimed it was ‘unfathomable that, while families in Uvalde, Buffalo, and countless other communities mourn their loved ones stolen by gun violence, a supermajority of the Supreme Court has chosen to endanger more American lives.’”

And while they vilified law-abiding gun owners, Democratic officials refused to criticize criminals, whitewashing violent gangsters such as MS-13 as “God’s children,” as did Pelosi, the third-highest official in the United States.

How can we explain the Democrats’ harshness to ordinary citizens and apologies for criminals? The Democrats’ ideology of “social justice” frames the country as a society of class oppression, with criminals being victims of society who shouldn’t be punished. Law-abiding citizens are regarded as unfairly “privileged” who should be stripped of their privilege and marginalized.

All is justified, for the Democrats, by “slavery!” “racism!” (and “sexism,” “transphobia,” “Islamophobia,” etc., etc.) and “disparities!” of outcome. They won’t allow you to be protected, but you can be confident that they will take every measure to protect themselves.

New York Gov. Kathy Hochul went ballistic: “It is outrageous that at a moment of national reckoning on gun violence, the Supreme Court has recklessly struck down a New York law that limits those who can carry concealed weapons.”