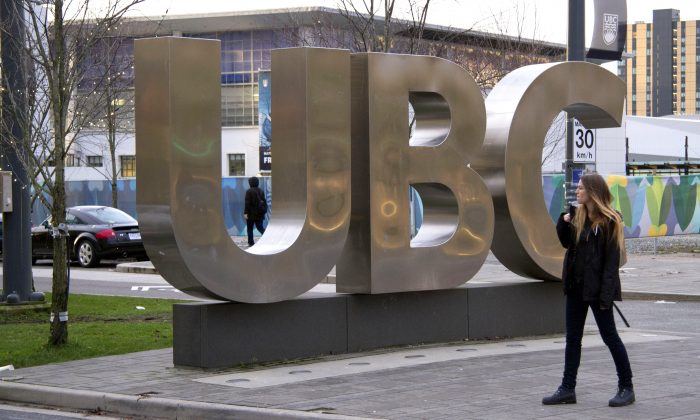 UBC is just one of many universities across North America grappling with how to take into account all sides in the fractious debate over free speech on campus. (Jared Gnam/For The Epoch Times)
Canada

Amid the ongoing wave of controversy over free speech on Canadian campuses, the University of British Columbia is expected to release its official policy on freedom of expression sometime next month.

But one noted philosophy professor says the updated policy will have a difficult time pleasing both the left and right—who are completely polarized on the issue—and may not even protect freedom of expression.

Like many North American campuses these days, UBC wanted a stronger policy in order to provide boundaries and address conflicts related to discrimination and freedom of expression.

Last November, a working group released the first draft of the statement. Feedback from students was mixed, and criticism was aimed especially at this sentence: “One person’s freedom of expression cannot be allowed to trample the freedom and well-being of others.”

Critics say the statement is unclear on what speech tramples others’ rights and what doesn’t, and such a provision would lead to endless future debates and could jeopardize one’s ability to speak freely on controversial topics.

Similar criticism is rife at universities across North America, where the progressive left or social justice advocates have shut down speech they deem harmful or oppressive to marginalized groups.

“Universities have always been the bastions of free speech ethics, but it’s now a place where people feel there are forces that are threatening that or less sympathetic to it or distorting it,” says UBC philosophy professor Paul Russell.

Russell, who describes himself as a left-leaning liberal, says the balance between freedom of speech and the need to make people feel safe is being skewed, with more of an emphasis put on restricting free speech than protecting it.

He fears UBC’s new statement will be nothing but lip service to the value of freedom of expression and could be used to police the flow of discussion on campus and even stop it—which he says would hurt the very idea of what universities and free democratic societies should be about.

Russell says he has seen a growing trend on campuses, especially in the humanities department, where a far left agenda is being pushed hard.

“It is almost as if they have some kind of ideological bug and they want to preach to others and they’re not really interested in a conversation, which is always in two directions,” he says.

A high-profile case late last year saw Lindsay Shepherd, a teaching assistant at Wilfred Laurier University, accused of being transphobic for presenting in class a video clip of University of Toronto professor Jordan Peterson taking part in a debate on the topic of transgender pronouns. Shepherd’s intent was to encourage debate among her students for the purposes of an academic discussion and critical thinking.

She was subsequently called on the carpet by university faculty who accused her of creating a “toxic” and “unsafe” learning environment. She nearly lost her position but was later exonerated after she took her case to the media and a private investigation by the university found she had done nothing wrong. The story made international headlines.

Russell says he found it appalling that this could happen in Canada, and found it “equally distressing that a lot of academics just didn’t seem to get what the problem was.”

“I think the very fact that a substantial section of the university community did not see that as a problem and tried to justify the type of treatment that [Shepherd] was given shows there really is an issue of freedom of speech and coercion at university campuses that certainly has to be discussed and thought about,” he says.

Analyzing what has caused the polarizing views of the left and right over the last several years, Russell believes social media has played a key role.

“When you are in an echo chamber it encourages dogmatism and rigidity so that you stop even thinking whether you have the whole truth, or maybe ‘I don’t have it all right and maybe I can learn something from other people,’” he says.

As for Shepherd, she says the lack of empathy to understand where the other person is coming from also hurts the ability to foster critical thinking and debate on campus.

“I think it’s important to be curious about how other people think and their thought processes, and I think we’ve lost some of that where people are quick to shut down talks when they don’t like what others think instead of engaging in civil discourse,” she says.

“If hate speech is really being used then that’s when the law steps in, but far-left activists use it pre-emptively to shut down those whose message they don’t approve of.”

Shepherd said she feels the general public understands the value of free speech and the importance of debate, noting she has received “hundreds of letters of support.” But she fears academic institutions are becoming less focused on intellectual inquiry and critical thinking and more focused on the student experience.

She added she doesn’t think the far left will be more open to debate any time soon and expects more controversies will arise on campuses, regardless of universities issuing new statements on free speech.

“It’s a respectable mission to want marginalized groups to have respect in society and to be able to participate in university. Everyone should agree with that, but then it kind of gets hijacked by the fringe radical activists who are very quick to consider anything to be oppression.”

UBC sociology professor Neil Guppy, senior adviser on academic freedom and lead author of the draft policy, said as a community UBC is trying to encourage debate and wants to hear from people with controversial ideas but also wants to do so in a respectful manner.

“It’s a sense of yes, freedom of expression is very important, but there are social rules that govern all communities and all speech that occurs, and trying to find that balance is an extremely difficult thing to do,” Guppy said.

He added that the UBC statement on academic freedom written in 1976 talks about wanting to ensure even abhorrent views can be expressed and debated, and it’s the university’s goal to include something similar in the new document, but in a way that doesn’t invite discrimination.

“But at the same time that we have that robust exchange of ideas and expressions, we want to make sure that people are disagreeing but not disrespecting others.”