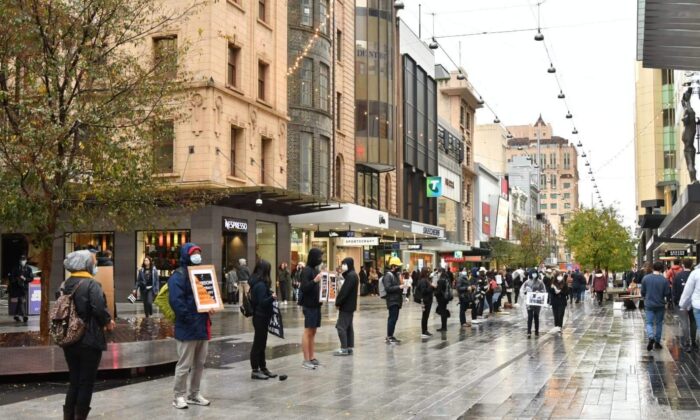 Hundreds of Hong Kongers gathered at Rundle mall in the CBD of Adelaide, South Australia on June 13 to mark the first anniversary of pro-democracy movement in their hometown (Supplied).
Australia

Despite the cold and wet weather, protestors gathered on June 13 at Rundle Mall in the Adelaide CBD, the capital city of South Australia, to mark the first anniversary of the pro-democracy movement in Hong Kong.

The demonstrators were mostly university students from Hong Kong. They stood quietly, several feet apart, forming a chain 100 meters down a pedestrian mall.

It was a stark contrast to recent protests that saw several capital city centers crowded with up to 20,000 protestors and social distancing rules ignored.

They expressed their support for Hong Kongers’ ongoing fight for freedom against the tyrannical Chinese communist regime.

They also called for Australians to stand up to the CCP’s bullying of other countries in recent months—what has become known as the CCP’s aggressive “wolf warrior” diplomacy.

Fiona Hui, one of the participants, told the Chinese Epoch Times that the demonstration was to raise awareness and deliver a key message: “Protect Australia; Free Hong Kong.”

“We are here to back Hong Kongers’ ongoing fight for dual universal suffrage for the Legislative Council and the Chief Executive to elect a truly democratic government,” Hui said.

Hui explained that it is their right, stipulated in the Joint Declaration signed by Britain and China in 1984, but it has been banned by Beijing and Hong Kong’s government.

Among the protestor’s biggest concerns is the Hong Kong National Security Law Beijing legislated in May.

“We are here to say no to the national security law as it will drastically threaten our basic right such as free speech, free press, free assembly rights, etc,” said Hui.

“We are also requesting the release of lawmaker Ted Hui who was arrested by police brutally yesterday (on June 12),” she added.

Living and studying in Australia, the group were also concerned about the CCP’s infiltration of Australia and expressed their support for Australia protecting its sovereignty.

“We fully support Australia government’s request for an independent inquiry into the origin of COVID-19 pandemic, as it has not only claimed millions of lives, but also impacted many businesses, which could have been avoided if not were for the CCP’s lying and cover-up, ”said Hui.

The Hong Kongers also resonated with the recent advocacy to reduce economic reliance on China by Australian businesses and consumers. Hui said she believes everyone can play a part.

“We are urging for Australians to boycott One Belt One Road initiative pushed by the CCP, as we cannot afford to trade off our resources for short term money,” she said. “Also do not  buy products made in China if possible.”

The demonstration amidst the rain caught the attention of many passers-by, with some stopping to express their condemnation of the CCP and support for the Hong Kongers.

Hui said she was encouraged that some passersby were from mainland China and showed an interest in the protest.

She said more people around the world, including mainland Chinese people, were now awakening to the “true colour” of the CCP, but also said: “We still need to get across the message to a wider audience.”

Hui emphasised that the protest was targeting the CCP, not the Chinese people. “It is important for people to realise that the CCP is a terrorist organisation,” she noted.

“It is a toxic regime violating the human rights of all ethnicities and groups, suppressing people of Hong Kong, killing Tibetans and Uighurs, and committing organ harvesting.

“What we need to fight against is the CCP’s totalitarian regime, not China or Chinese people,” she said.

The Anniversary of the Hong Kong Pro-Democracy Protests

Last year on June 9, an estimated more than one million Hong Kongers took to the streets against a proposed legislation to allow extraditions to mainland China, where the courts are controlled by the CCP.

The Hong Kong government later withdrew the bill in the midst of the escalating protest marches.

The protests continued until the outbreak of the CCP virus pandemic, commonly known as novel coronavirus.

The National Security Law announced in May has provoked strong reactions across the world.

Washington has said it would remove Hong Kong’s special treatment in U.S. laws as it deemed the city to no longer be sufficiently autonomous.

Other members of the Five Eyes intelligence group (Australia, the UK, and Canada) as well as the European Union have also expressed concerns about the proposed legislation.