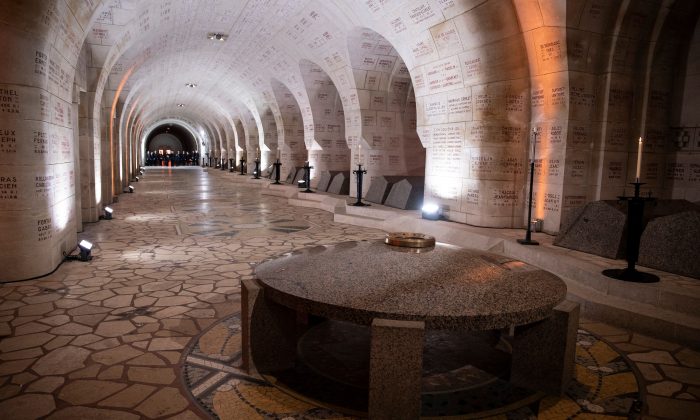 French President Emmanuel Macron flanked by two young students arrives to pay his respect at the Douaumont Ossuary as part of ceremonies marking the centenary of the First World War, in Douaumont, eastern France, November 6, 2018. - The French President kicked off a week of commemorations for the 100th anniversary of the end of World War One, which is set to mix remembrance of the past and warnings about the present surge in nationalism around the globe. (Photo by Etienne LAURENT / EPA POOL / AFP) (Photo credit should read ETIENNE LAURENT/AFP/Getty Images)
Viewpoints

QUESTION: What are the prospects for “peace on earth” in 2019?

ANSWER: Excellent—as soon as Satan learns to ice skate on a frozen Hell.

To illustrate the implacable nature of war, there was military conflict every year of the 20th century. The Polynational War Memorial lists 245 conflicts of greater or lesser magnitude/duration starting with the Boxer Rebellion (1900) and Sino-Japanese War (1900), including several starting in the 19th century but persisting into the 20th (Second Boer War [1899-1902] and Philippine Insurrection [1899-1902]). And it notes another 15 such beginning in the 21st century, obviously, the Afghanistan fighting, civil war in Syria, and the second Iraq war.

One can conclude from the listing and overlapping of armed conflict that probably there was military action every day of the 20th and, thus far, in the 21st century.

And, in passing, the endless media citations that U.S. military involvement in Afghanistan is our “longest war” is simply wrong. The Korean war, begun in 1950 technically continues, as combat ended with an armistice. Although a peace treaty to conclude the war officially is currently bruited about, the Korean War has now lasted 68 years.

And, although a beginning and end of U.S. fighting with American Indians is difficult to determine, historians suggest that it began in the 17th century and concluded with a treaty ending the Apache Wars in 1924, a period of close to three centuries.

And a quick review of current conflicts isn’t salutary for peace:

Yemen. Critical observers are quick to forget the Saudi-led Coalition acted in support of the legitimate government with implicit UN endorsement. The subsequent humanitarian catastrophe is blamed on Saudis, but closing the Hodeida port was rebel action.

The “truce” arranged by UN-sponsored negotiations looks suspiciously more akin to a reloading break than a peace path. Consequently, the only positive is Saudi leadership, emmeshed in the Khashoggi killing, needs Yemen’s negative PR like a drowning man needs a stone life preserver.

Syria. The West is still coming to terms with the reality that Assad, with Russian/Iranian/Hezbollah support, has won the civil war. Assad forces are likely to exterminate the ISIS remnant in Ibid and elsewhere sooner than later—but such will only metastasize ISIS into anomic terrorist cells throughout the region. And, assuming it is implemented, U.S. force withdrawal (and betrayal again of Kurdish allies) will accentuate combat with Ankara, which sees the Kurds as terrorists.

Ukraine. The tense ceasefire between Ukraine forces and Russian-backed anti-Kyiv nationalists that annexed Crimea and parts of eastern Ukraine cracked with Moscow’s November seizure and continued holding of Ukraine naval vessels and crew. Rumors of Russian armor massing for another attack may be overblown, but a crisis associated with the February presidential election is predictable.

Israel-Palestine. Washington moving its Embassy to Jerusalem may be a reality bookend to a generation of peace plan failures, but it is unlikely to facilitate prospects for the long-awaited U.S. peace proposal. Meanwhile, relentless attacks from Gaza-Hamas prompt relentless retaliation by Israeli forces. Such are more harbingers of another bloody Israel-Hamas conflict circa 2008-09 than any likelihood of even “live-and-let-live” peace.

Faceoff in South China Sea. Chinese occupation and fortification of disputed islands in the South China Sea prompts sputtering outrage from neighbors (Philippines, Vietnam, Taiwan) making comparable claims. Beijing has blown off International Court of Justice rulings and is no more likely to accept international arbitration than to transform the Imperial Palace into a Trump hotel. Potential conflict arises as the United States insists these are international waters/airspace and sails/flies through them. Trigger-happy action/riposte could escalate into bloody combat.

Perhaps the most positive circumstance for peace is the enormous reluctance of Western powers to accept any conflict-related casualties—even trivial losses by “all volunteer” forces. It is all but impossible to conceive of a conflict that would prompt Europeans to endure any equivalent to the millions of WWI/II deaths. Or for the United States to accept casualties of the dimensions of Korea and Vietnam, respectively 35,000 and 58,000 deaths. As a reference point, total casualties in Afghanistan are lower than D-Day at Normandy or Marines assaulting Tarawa.

We may get peace by default rather than by commission.