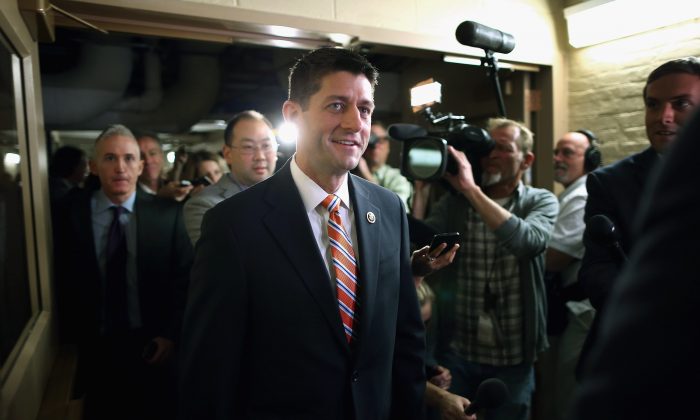 Prospective Speakers Multiply in House as All Wait on Ryan

WASHINGTON—Every day another Republican lawmaker seems to wake up and decide that he—and in at least one case, she—might make a pretty good speaker of the House.

The profusion of potential candidates, now approaching double digits, is happening even with all attention focused on Wisconsin Rep. Paul Ryan, the former GOP vice presidential nominee widely seen as the best person for the job.

Ryan, who has made clear that he does not want to be speaker, is home in Janesville, Wisconsin, thinking it over anyway under pressure from top party leaders. And with Congress out of session for a weeklong recess, Capitol Hill has fallen quiet after a series of wild days during which Speaker John Boehner shocked the House by announcing his planned resignation, and Boehner’s heir apparent, Majority Leader Kevin McCarthy, abruptly took himself out of the running.

The stunning developments left a leadership vacuum at the pinnacle of Congress.

The stunning developments left a leadership vacuum at the pinnacle of Congress. Now into it are stepping a growing number of Republican lawmakers from around the country, some relative newcomers, others with experience to point to, united by a chance to lunge at the once-in-a-lifetime opportunity to become speaker of the U.S. House, second-in-line to the presidency.

Why any of them would want a job that defeated the current occupant and scared off his No. 2 is another question. The daunting rift between establishment-minded lawmakers and the hard-line conservatives who pushed Boehner to the exits shows no sign of dissipating, and it threatens to complicate life for whoever next occupies the speaker’s chair. Congress also faces a series of formidable tasks over the next several months, including increasing the federal borrowing limit to avoid a default and paying the government’s bills to stave off a shutdown.

Nevertheless, the wannabe speakers are multiplying.

“I am humbled to have my name mentioned as a potential candidate, and I am considering the pursuit of the speakership in response to those requests,” Rep. Bill Flores (R-Texas) wrote in a letter to fellow House members Wednesday. “If we all spend enough time on our knees praying for each other, we can heal our divisions and truly work together to restore America to the ‘Shining City on a Hill’ that President Reagan challenged us to become.”

Rep. Mike Pompeo (R-Kan.) released a statement observing: “I know every member of the House is looking for the right person. If I can serve the American people and the conservative movement in any way, sign me up. However, a couple weeks ago I was floated as a presidential candidate, so I might be pretty busy.”

And a freshman congressman from Montana, Ryan Zinke, got into the action. “We’re looking at it. Our phones are ringing off the hook because I think America wants something different,” Zinke said. “I haven’t decided, but what I have decided is that Congress better do our duty and defend our values of this country.”

Several of the lawmakers sought to make clear that they were being urged by their fellow Republicans to run for speaker; not doing so out of their own ambitions.

And several also took pains to make clear that they would run only if Ryan does not.

“We are all hopeful that Paul is going to say that he would appreciate the opportunity to serve as speaker,” said Rep. Marsha Blackburn of Tennessee, adding that she’s been encouraged by colleagues to look at the job. “It is going to take a listening ear and a steady head to walk our conference through some of these issues,” she said.

Others who’ve suggested their interest in the speakership, or contacted fellow lawmakers to sound them out, include GOP Reps. Michael McCaul and Michael Conaway of Texas, Lynn Westmoreland of Georgia, and Darrell Issa of California. Reps. Daniel Webster of Florida and Jason Chaffetz of Utah were running against McCarthy before he dropped out, and remain in the race. Still others, such as Rep. Matt Salmon of Arizona, have seen their names pushed by outside groups seeking new leadership for the House GOP.

“These are all really, really, good people, and I think if they could convince the conference that they would run the conference in a way that’s more member-oriented, many of them could be good speakers,” GOP Rep. Mick Mulvaney of South Carolina, a founding member of the hard-line House Freedom Caucus, said in an interview after several potential candidates contacted him to gauge support.

Although Ryan would be the prohibitive favorite for the job if he does seek it, Mulvaney and others disputed arguments that he’s the only one who could unite the House GOP. Ryan, an expert on budgetary matters who chairs the tax-writing Ways and Means Committee, is already drawing criticism from some on the right for his support for comprehensive immigration legislation and government bailouts.

“I like him and I respect him, and I think there are a number of directions he might take us that I don’t want to go, and immigration is one of those,” said Rep. Steve King (R-Iowa). “I don’t think he would be one who would transform (the House) and turn it into a membership-driven organization and I think this is our one chance to do that.”