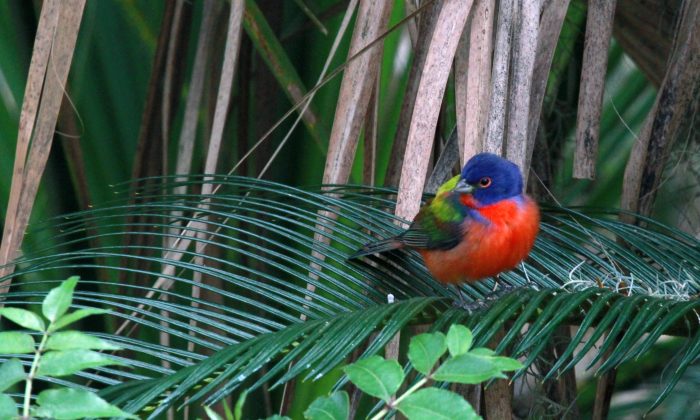 A dazzling colorful bird has appeared recently in Brooklyn’s Prospect Park, prompting bird watchers to flock to the area to try to spot it.

Known as “the most beautiful bird in North America,” the Painted Bunting has been spotted numerous times this past week, starting on November 27.

Over 100 avian enthusiasts a day are showing up at the park’s LeFrak Center to see the bird, according to the New York Post.

Now, back to the Painted Bunting.I shot this video today under the sunlight and what a beautiful bird.

“A lot of people are losing their [expletive] over this bird,” said Doug Gochfeld, a birding-tour leader.

Keir Randall was walking in the park when he saw it.

“When I first tried to photograph it, I was literally shaking so much I had to calm myself down to get the shot,” he said.

The bird is rarely found north of Arkansas, but the mature male has seemed to enjoy his current home. He grazed and played hide-and-seek with birders and reporters on native grasses outside the center, reported the New York Times.

Tom Stephenson, a bird-book author who lives near the park, said that painted buntings have been spotted perhaps seven or eight times in the city. Males are especially rare.

They do show up to Cape May at the southern tip of New Jersey frequently, but those are the immature kind that aren’t nearly as colorful.