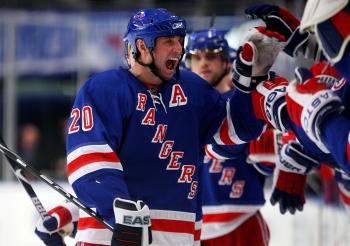 Susan Shan
View profile
Follow
biggersmaller
Print
The New York Rangers gave their fans an early Christmas present with a fourth win in a row by defeating the Florida Panthers 4–1 at MSG on Wednesday night.

The win ended a five-game home losing streak and brought the crowd to its feet with chants of “Let’s go Rangers!”

“We want to be a team that establishes some dominance at home,” Assistant Coach Mike Sullivan said.

The dominance came after the Panthers took an early 1–0 lead off a goal by right-winger Victor Oreskovich just four minutes into the game.

But the night really belonged to assistant captain Vinny Prospal. Five minutes into the second period and on a power play, Prospal passed to Marian Gaborik, whose shot rebounded off Panthers goalie Tomas Vokoun back to Prospal. Prospal easily scored with an eight-foot wrist shot.

Prospal’s second goal came just 23 seconds into the third period. Center Brandon Dubinsky’s shot ricocheted off Vokoun. Dubinsky got his own rebound and as he was going behind the net, passed to Prospal at the top of the crease who scored, increasing the lead to 3–1.

Prospal’s two goals ended his streak of 14 games without a goal. He said after the game, “Last time we played in our building, we got embarrassed against our crosstown rivals so we just wanted to make sure that didn’t happen again.”

“This team [Panthers], when we played them the first time here, they beat us, so we had redemption in our heads.”

The Rangers added a short-handed insurance goal just past the midway point in the third. Drury stole the puck from Panthers defenseman Dennis Seidenberg, who then tripped him. Gaborik grabbed the loose puck and scored on the breakaway for his league-leading 26th goal.

Gaborik’s scoring consistency prompted Prospal to say, “We need scoring from everybody. We just need to pick up the production around the locker room. We just need to support him [Gaborik] and Hank [Lundqvist].”

Henrik Lundqvist had another excellent game with 33 saves. It was the Swedish goalie’s third straight game in which he only allowed one goal. He has 136 saves on 141 shots in his last four games—a .965 save percentage.

Lundqvist said, “In hockey, you need that edge. You need to be aggressive and play physical. We’ve been good on the road lately, but we need to get back to being a good home team. It’s very important.”

After they won on the road against the hapless Carolina Hurricanes 3–1 on Monday, the New York Rangers coaches praised the team for continuing to attack instead of sitting back complacently after a 2–1 lead in the third period, MSG reported.

Head coach John Tortorella complimented the team once again and said, “I thought tonight was a complete game. Everybody contributed. I thought we played well and we deserved to win the hockey game.”

Tortorella singled out Prospal, Dubinsky, Drury, and Lisin for their strong play.

The NHL will take a two-day break on Dec. 24 and 25 with no games being played.