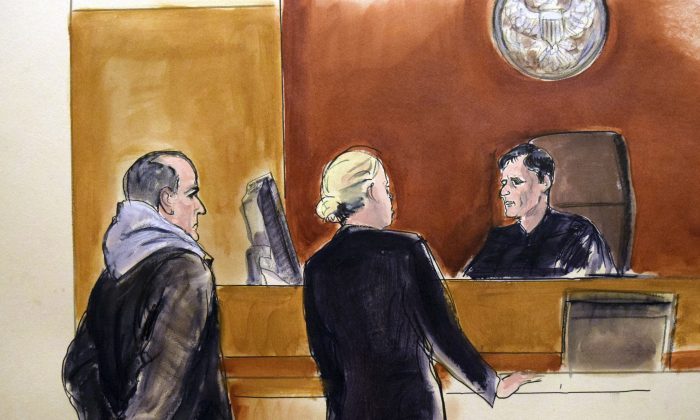 In this courtroom drawing, Elvis Redzepagic (L) appears before Magistrate Judge Robert Levy (R) in New York on March 4, 2017, during his arraignment on charges that he attempted to provide material support to a foreign terrorist organization. (Elizabeth Williams via AP)
New York

NEW YORK—A New York man repeatedly traveled to the Middle East to try to join ISIS or another terrorist group and later told authorities he’d been prepared to strap on a bomb to sacrifice himself for jihad, prosecutors said Saturday.

And when police on suburban Long Island arrested Elvis Redzepagic on Feb. 2 on a minor, unrelated charge, he told them: “I’m going to leave this country, and I’m going to come back with an Army—Islam is coming,” according to a federal court complaint unsealed Saturday.

The 26-year-old U.S. citizen was being held without bail after appearing in a Brooklyn federal court Saturday. He’s charged with attempting to provide material support to a foreign terrorist organization.

Authorities have prosecuted a number of people accused of aiming to join the ISIS terrorist group and other terrorists in recent years, though in some cases, the accused haven’t actually succeeded in traveling overseas.

Redzepagic “was persistent in his efforts” to join Islamic fighters in civil-war-ravaged Syria, making it to Turkey in 2015 and Jordan last year and even getting to the Syrian border, said William F. Sweeney, assistant director in charge of the FBI’s New York field office.

Redzepagic, who lives in Commack, told authorities after his arrest that he’d become a devout Muslim while in Montenegro, in the Balkans, and believed a cousin was a battalion commander in Syria for ISIS or the group once known as the Nusra Front, according to the court complaint. The latter group—now called the Fatah al-Sham Front, and also known at times as Jabhat al-Nusra—is an al-Qaida affiliate.

After telling his cousin he wanted to join him, Redzepagic went to Turkey in July 2015 and aimed for Syria, first getting cab rides to the border, then directions to a border wall manned by the military, then instructions to try to cross instead by making a two-day trip through the woods, the complaint says.

He’d been willing to put on a bomb and sacrifice himself, he told authorities after his arrest, though he told them at another point he just wanted to “feed the children” in Syria. But frustrated that he didn’t get more help crossing the border, Redzepagic returned to the U.S., the complaint says.

“Since I got back from Turkey from trying to perform jihad and join Jabhat al-Nusra the CIA has been bothering me,” he wrote to a Facebook contact in October 2015, the complaint says. “It’s annoying but I out smarted them.”

CIA spokespeople didn’t immediately respond to a message Saturday about the case.

He also told various Facebook contacts that “I just don’t like this country,” apparently meaning the United States, and that “jihad is the best for u,” according to the complaint.

“There will come a time where people will only know to say Allahu akbar,” he wrote in one message, using the Arabic phrase for “God is great,” the complaint says.

Then Redzepagic went to Jordan last August to try again to get to Syria, but Jordanian officials stopped him and asked why he wanted to go there. He said he wanted to study Arabic, the complaint says.

It says he then told the same to U.S. Customs and Border Protection officials, who found he had electronic files about jihad. He said he’d downloaded them two years earlier, the complaint adds.

It’s not immediately clear whether he remained on federal authorities’ radar between then and his arrest in February, when he was released without bail on the minor charge. Long Island police notified federal authorities about the arrest.