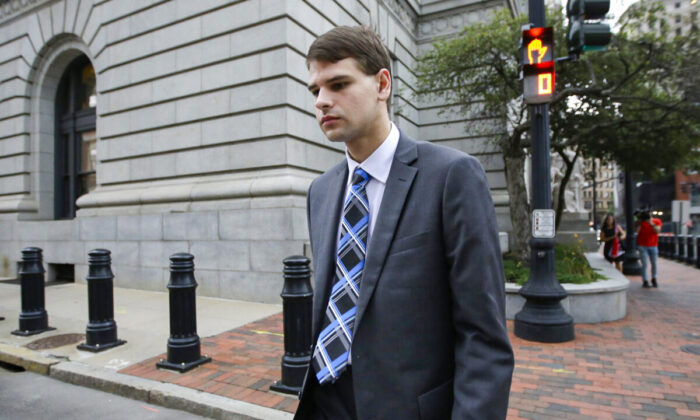 Federal prosecutors say a Vermont man charged with killing his mother at sea in 2016 in a plot to inherit millions should remain behind bars pending trial because he poses a flight risk and danger to others.

The prosecutors filed a motion in U.S. District Court in Burlington, Vermont, on Friday, opposing a request by Nathan Carman to be released.

Carman, 28, who lives in Vernon, was charged in May with killing his mother, Linda Carman of Middletown, Connecticut, during a fishing trip in 2016 off the coast of New England in which his boat sank. He was found floating in a raft and rescued eight days after departing from a Rhode Island marina. He pleaded not guilty in May in his mother’s death.

Prosecutors also have accused Carman of killing his grandfather, John Chakalos, who they say was shot in his home in Windsor, Connecticut, in 2013 as part of a scheme to obtain money and property from his grandfather’s estate. Carman has not been charged in that case.

Earlier this month, Carman’s lawyers filed a motion seeking his release, saying the evidence against him is “tenuous at best” and he does not pose a flight risk or danger. The lawyers said Carman is willing to surrender his passport, submit to electronic monitoring and turn over all the money he has—$10,000—to a third party or post some of that money as bail.

Prosecutors wrote in opposing Carman’s motion on Friday that “Many of the claims made by Carman in support of his request for release are misleading or mistaken.”

“Carman’s motion for release fails to adequately address the risk of flight and similarly fails to address his dangerousness,” they wrote. “Moreover, the conditions of release he proposes would do little to mitigate these concerns.”

An email was sent to Carman’s public defenders seeking comment.

They wrote in the motion for release that he has never attempted to threaten or influence a witness and has led a quiet life in Vernon for the last eight years with solid ties to the community.

The prosecutors say Carman is a flight risk because he is charged with an offense that carries a mandatory life sentence and has few connections that would encourage him to stay in this country. They wrote that the letters Carman submitted in support of him are primarily from people who knew him as a child.