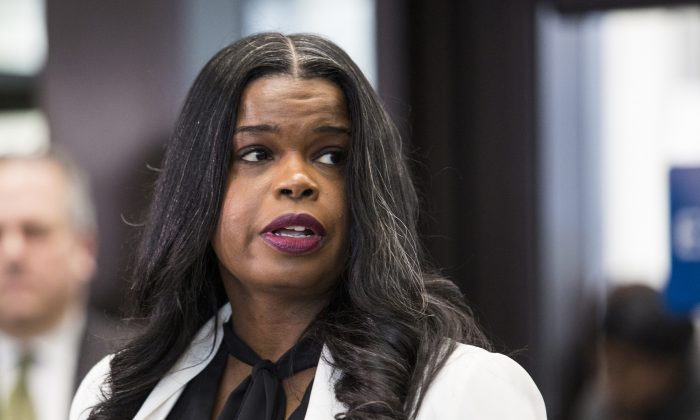 Cook County State’s Attorney Kim Foxx and prosecutors in her office lied and misled the public about the case against Jussie Smollett, according to a special prosecutor’s report released Monday.

Foxx, a Democrat whose campaign was backed by billionaire George Soros, initially said there was a “strong case” against Smollett for faking a hate crime against himself that would have led to a conviction. But Foxx claimed days later that certain aspects of the case “would have made securing a conviction against Smollett uncertain.”

Dan Webb, a special prosecutor appointed to probe the actions of Foxx and her underlings, said the pivot was “false and misleading.”

The office also offered a series of other false and misleading statements, Webb’s report said.

Foxx recused herself from the case in 2019 because she was rumored to be related to or have a relationship with Smollett or his family. But, according to legal rules, Foxx had to recuse her entire office and ask the court to appoint a special prosecutor. Foxx instead chose to keep in place a prosecutor she appointed from within her office to oversee the case.

The office and Foxx “made the decision to ignore this major legal defect seemingly because they did not want to admit they had made such a major mistake of judgment,” Webb wrote, adding that they “then compounded the problem by making a false statement to the media” about the matter.

Foxx and/or prosecutors in her office also falsely said Smollett had no criminal background when they dismissed the initial case against him, falsely represented that $10,000 was the most Smollett could have been ordered to pay in restitution, and were misleading when they claimed the dismissal was not unusual because they could not identify any similar cases, according to the report.

Foxx’s office, CCSAO, told The Epoch Times in an email statement that it disagrees with the findings of abuse of prosecutorial discretion. It did not address the findings that Webb and prosecutors in her office offered false and/or misleading statements.

“A prosecutor’s discretion is as broad as any in the law, and differences of opinion as to how a case was handled do not signify an abuse of discretion. Finally, it is important to emphasize that the OSP did not find any criminal activity or undue influence on the part of the State’s Attorney or the CCSAO,” the office said.

Webb said he uncovered evidence that may meet the level of a violation of legal ethics by Foxx and lawyers working under her. He does not have the power to make ethical findings but will refer the matter to the Illinois Attorney Registration & Disciplinary Commission. The investigation did not unearth evidence supporting criminal charges against any of the prosecutors.

The report was released on the orders of Cook County Circuit Judge Michael Toomin.

Toomin had rejected previous attempts to make the full report public—a summary was released last year—but agreed to order its release after Smollett was convicted earlier this month of staging a hate crime against himself and lying to police.