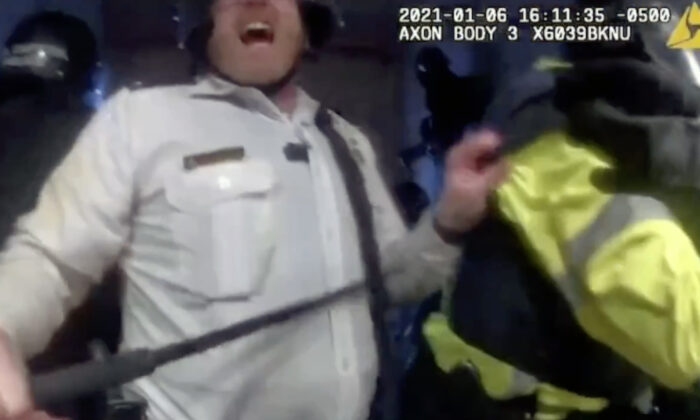 The Washington D.C. police officer who beat a Minnesota woman with a metal baton at the U.S. Capitol on Jan. 6, 2021, is a 19-year veteran with a history of use-of-force complaints.

The officer who delivered most of the blows was identified in new court filings as Metropolitan Police Department (MPD) commander Jason Bagshaw, 45.

“The tunnel CCTV footage shows that over an almost two-minute span running from approximately 4:07:00 to 4:08:54 p.m., Lieutenant Bagshaw repeatedly struck, or tried to strike, the woman in red with his baton,” U.S. prosecutors said in one of the briefs (pdf).

Bagshaw has since been promoted to commander.

Prosecutors also acknowledged that Bagshaw “threw five left-handed jab punches in the direction of the woman in red’s head or upper body” and included an image showing Bagshaw with his left fist raised while standing near White, or the woman in red.

Bagshaw did not respond to a message. MPD did not respond to requests for comment. The agency said previously it wasn’t aware of the surveillance footage, released in December 2021 by attorney Joseph McBride, showing one of its officers pummeling White.

Bagshaw, the video shows, struck White’s head eight times, then punched her with his left fist. He later made a fist and punched White in the face and head six times. Another officer—with both hands on his baton—jammed the butt of the weapon at White’s face and then rammed her with the baton 10 times, the video footage shows.

Prosecutors attempted to defend the strikes.

“While many observers might instinctively cringe at the sight of a male police officer using a baton to strike, or attempt to strike, the head, neck, and shoulder area of a smaller woman, there are many possible lawful justifications for Lieutenant Bagshaw’s use of force,” they said.

“The woman in red’s location alone was criminal, making her subject to arrest, and it presented a threat to the officers and the U.S. Capitol. Here, there is no evidence in the trial record explaining how the woman penetrated the phalanx of officers, whether she was armed at the time, or if she had threatened or undertaken violent action against an officer. Depending on these circumstances, an officer may have been justified in using violent force against her. It is possible that Lieutenant Bagshaw struck her for no justifiable reason. But it is also possible he struck her to disarm her, or to subdue her after she attacked an officer,” they added.

White’s case was featured in The Epoch Times documentary “The Real Story of Jan. 6.”

“The first blow came to my head by a metal baton,” White said in the film. “It was really bad. I remember trying to keep myself up. I was scared I would be trampled.”

In the film, use-of-force expert Stan Kephart said striking White in the head was a potentially fatal mistake.

“The head is a sphere. What happens when you strike a spherical object with a blunted object, at least resistance and glances off the head. That’s a possibility. The second thing is you can hit them flush and kill them,” Kephart said. “If your intent was to kill them, you should have been using a firearm and not a baton.”

Bagshaw, who started working for the department in 2003 and has been promoted twice since Jan. 6, 2021, has been the subject of multiple complaints over the years.

In one instance, a Washington resident accused him of working with other officers to try to cover up an illegal beating in 2013. Bagshaw falsely said in an application for a search warrant for the man’s home that a taxi driver told him the man looked like a man who had assailed the driver, according to court filings.

Bagshaw testified in a deposition that another officer told him the driver did not know if the man was one of the men who assailed him. The case was settled out of court.

In another case, which is still ongoing, Bagshaw and other MPD officers were accused of violating the constitutional rights of protesters who gathered in Lafayette Square near the White House in the wake of George Floyd’s death. A second case that is ongoing says Bagshaw instructed officers to beat a woman who was protesting the death of her son at the hands of the police.

In a December 2020 incident documented on video shared on Instagram and other social media websites, Bagshaw picked up a man identified as a medic, carried him a short distance, and tossed him to the pavement.

In mid-July 2022, Bagshaw shot an armed man to death in a crowded restaurant district on D.C.’s waterfront. Bagshaw, who was off-duty at the time, said he fired after witnessing Lazarus David Wilson, 23, of Dumfries, Virginia, pointing a firearm at patrons.

One Step Toward Justice

White told The Epoch Times she identified Bagshaw as her attacker weeks ago, based on security video and other sources.

She said his identity being made public is just one step toward justice in her case.

Publicity on the details, however, sparked her post-traumatic stress disorder from the Capitol incident and 10 years of domestic abuse by her ex-husband, she said.

“The highest-ranking officer in the tunnel targets her and just absolutely tees off on her and begins to brutally beat her,” McBride, White’s former attorney told The Epoch Times in late 2021.

McBride has called for a special prosecutor to investigate how police officers acted on Jan. 6.

White has said she traveled to Washington on Jan. 6 to peacefully protest.

She said in a lawsuit against Washington police officials and officers that she was illegally beaten and abused, and falsely imprisoned.

Prosecutors charged White, who has said she was unarmed, with four counts, including civil disorder and entering and remaining in a restricted building or grounds.

White is attempting to withdraw the suit because she says she is busy preparing for her criminal trial.

According to footage from the scene, White yelled at people who were breaking glass to stop, but later pushed her way towards the tunnel and eventually came to be standing next to officers holding riot shields.

“I admit, I was pushing to get in because I’m assuming it’s just another doorway to go up to the next level,” White said in a podcast interview. Officers were spraying mace and soon began beating her, she said, adding, “And next thing I know, I’m in the police being like pushed backwards like ping pong of sorts and the next thing I know I’m in the State [sic] Capitol.”

Prosecutors have not charged any officers on-duty on Jan. 6, including the MPD officer who shot a woman dead, even though use-of-force reports obtained by The Epoch Times detailed the brutality of attacks on protesters and rioters.

Bagshaw’s identity was revealed in motions filed after the trial of Kyle Fitzsimons, another Jan. 6 defendant.

Fitzsimons was charged with a number of violations of the law, including assaulting, resisting, or impeding officers.

His public defender has asked for U.S. District Judge Rudolph Contreras, an Obama appointee who oversaw the bench trial that concluded on Aug. 19, to toss the assault charge because she says Fitzsimons was defending White against Bagshaw’s “excessive force.”

“In response to the display of excessive force and calls for help, Mr. Fitzsimons threw an unstrung bow towards the officer in order to distract him. Mr. Fitzsimons reasonably believed that the woman faced a present threat of death or serious injury and acted lawfully in response to the threat,” Natasha Taylor-Smith, the lawyer, said in a brief.

Americans are able to use reasonable force against an officer’s excessive force, the brief said, citing the Fourth Amendment and earlier decisions in federal courts. That ability comes “if the force used was so excessive that no reasonable officer could have believed in the lawfulness of his actions,” one of the earlier rulings stated.

“Lieutenant Bagshaw’s use of force against the woman in the red sweater was clearly apparent and no reasonable officer could justify his actions,” Taylor-Smith said, citing the surveillance photograph showing Bagshaw’s raised fist.

Fitzsimons could see Bagshaw strike White with a baton, then with his closed fists, and clearly aimed the bow in the direction of the beating, according to the brief. The bow bounced off the helmet of another officer, the government has said.

“The evidence on record is sufficient for this Court to make the inference that Mr. Fitzsimons’s intent was to distract Lieutenant Bagshaw and prevent him from continuing to beat the woman,” Taylor-Smith said.

Prosecutors urged Contreras not to throw out the charge.

They say there is no evidence that Fitzsimons was aware of White, let alone that he thought she was in danger and believed force was necessary to protect her.

At least five people obstructed Fitzsimons’ view of the beating, including four officers, the government’s brief says. Additionally, White is shorter than the officers standing in front of her, further obscuring the view. The prosecutors argue that there is no evidence “what the defendant perceived or thought when he hurled his bow like a spear.”

Even if Fitzsimons did witness what unfolded, no evidence was presented during the trial proving that Bagshaw violated use-of-force policies or that his actions were otherwise unjustified, prosecutors said.

Bagshaw stopped using his baton against the woman over 20 seconds before Fitzsimons hurled his bow, prosecutors said. And the video footage shows that Fitzsimons began preparing to hurl the bow “before Lieutenant Bagshaw raised his fist,” they said. “The defendant’s use of a weapon thus constituted an unreasonable escalation, fatally undermining his defense-of-others claim.”