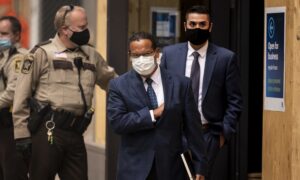 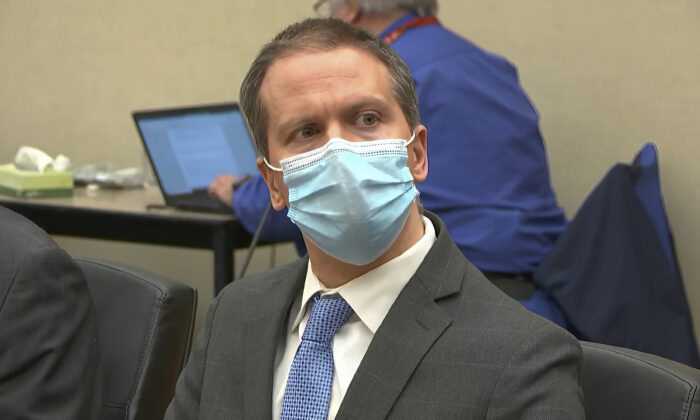 In this image from video, former Minneapolis police officer Derek Chauvin listens as the verdict is read in his trial for the 2020 death of George Floyd, at the Hennepin County Courthouse in Minneapolis, Minn., on April 20, 2021. (Court TV via AP)
US News

Former Minneapolis police officer Derek Chauvin should receive an aggravated sentence for his actions leading to the death of George Floyd, prosecutors argued in a legal brief filed on Friday.

The aggravating factors, they said, include Floyd being “a particularly vulnerable victim”; Floyd being “treated with particular cruelty”; Chauvin abusing his position of authority; Chauvin committing the crime as part of a group of three or more persons; and the fact that multiple children were present when the crime was committed.

“Any one of these five aggravating factors would be sufficient on its own to warrant an upward sentencing departure. Here, all five apply. The State therefore respectfully requests that the Court find the facts necessary to support the existence of these five aggravating factors, and that the Court impose an aggravated sentence on that basis,” prosecutors said.

Per Minnesota law, Chauvin faces sentencing for only the most serious crime, second-degree murder. He faces up to 40 years in prison, depending on what Cahill decides. Whether the judge agrees there were aggravating factors will play a major role in the ultimate sentence.

Nelson said Floyd was not particularly vulnerable because he was well over 6-feet tall, “muscular,” and weighed over 200 pounds, and struggled with officers against being placed in a patrol car.

He also argued that Chauvin’s actions were not “particularly cruel”; that abuse of a position of authority by an officer is not a recognized aggravating sentencing factor in Minnesota; that it’s not clear whether three or more persons participated in the offense because the other former officers have not yet gone on trial; and that the presence of children during the encounter is not a sufficient ground for an upward departure.

“Because the State has failed to meet its burden of proving the existence of the alleged aggravating factors beyond a reasonable doubt, the Court may not consider them in making its sentencing determination,” Nelson wrote in his brief.

Chauvin is due to be sentenced on June 25.