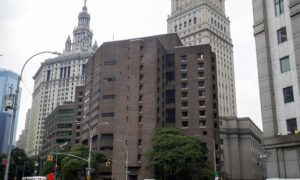 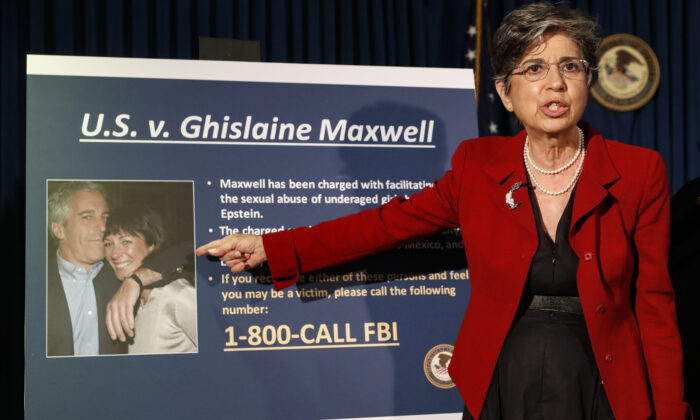 Audrey Strauss, Acting United States Attorney for the Southern District of New York, points to a photo of Jeffrey Epstein and his ex-girlfriend Ghislaine Maxwell, on July 2, 2020. (John Minchillo/AP Photo)
US News

NEW YORK—Prosecutors hope to preserve a July trial date for Ghislaine Maxwell by defending a late-hour expansion of charges against her, saying they developed when a woman spoke after Maxwell’s arrest about her abuse at the hands of Jeffrey Epstein in the early 2000s.

The rewritten indictment lodged against the 59-year-old British socialite on March 29 added sex trafficking charges to allegations that Maxwell recruited three teenage girls from 1994 to 1997 for then-boyfriend Jeffrey Epstein to sexually abuse. New charges stretched the conspiracy to 2004.

Two days after the superseding indictment was returned in Manhattan federal court, defense attorney Bobbi Sternheim called it “shocking, unfair, and an abuse of power,” saying the charges were based on evidence prosecutors had in their possession for years.

“That the government has made this move late in the game—with trial set for July 12th—is obvious tactical gamesmanship,” Sternheim wrote in a letter to the judge.

She said defense lawyers had not yet decided whether to ask to postpone the trial, but her letter suggested it was highly likely and would be further grounds for Maxwell’s release on bail.

On Friday, prosecutors wrote to the judge saying they would oppose any delay of a trial set to occur almost exactly a year after Maxwell was arrested at a secluded New Hampshire home.

They said the timing of the new charges “was dictated by developments in the Government’s ongoing investigation, not the nefarious motivations suggested by the defense.”

Prosecutors conceded that the woman whose claims led to the new charges was interviewed in 2007 during a probe of Epstein in Florida. But they said she did not agree to be interviewed in the government’s current probe until last July. And in-person interviews were not finished until January.

Prosecutors said they then spent two months corroborating the woman’s claims before seeking the superseding indictment in late March. Maxwell’s arraignment on the new charges is scheduled for this month.

According to the indictment, the woman was sexually abused multiple times by Epstein between 2001 and 2004 at his Palm Beach, Florida, residence, beginning when she was 14 years old. It said Maxwell groomed the girl to engage in sex acts with Epstein by giving her gifts and cash.

Epstein was facing sex trafficking charges when he took his life in a Manhattan federal jail in August 2019.

Maxwell has pleaded not guilty. She has been held without bail at a federal lockup in Brooklyn. A judge has repeatedly rejected bail packages that would require the posting of $28.5 million in assets and require Maxwell to remain at home, with armed guards preventing flight.