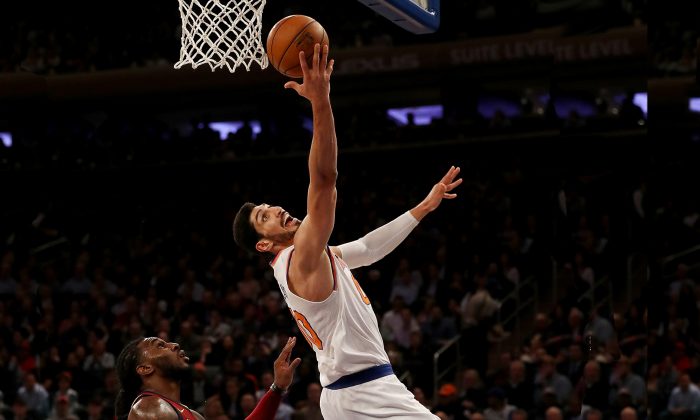 Enes Kanter #00 of the New York Knicks heads for the net as Jae Crowder #99 of the Cleveland Cavaliers defends at Madison Square Garden on November 13, 2017 in New York City.(Elsa/Getty Images)
NBA

Enes Kanter, star center for the New York Knicks, cares about rebounds, blocked shots, and layups—and he has racked up quite a number of each through his six-year NBA career.

The 25-year-old, born to Turkish parents in Sweden, cares about a lot more than just basketball.

He also cares about the politics of his ancestors’ homeland.

Being young, brash, and used to publicity, Kanter has been outspoken about his views. And, as many others are doing, he’s making the best use of Twitter to speak his mind.

Stand For What You Believe!
pic.twitter.com/C0PUQUspwT

Kanter has, as a star player for three different teams in his brief NBA career, attracted hundreds of thousands of followers — more than half a million, in fact. But not all his followers are fans.

And now, because of a series of tweets Kanter posted in May and June of this year, the Turkish Government wants the basketball star sidelined — in a Turkish jail.

According to the government-run Anadolu news agency, a Turkish prosecutor thinks the young man deserved four years in jail for having the effrontery to publicly criticize Turkish president Tayyip Erdogan.

Kanter’s response? He tweeted, “I have said less than that honorless (man) deserves. Add another 4 years for me, master.”

Though born in Sweden, Kanter grew up in Turkey and had long been an outspoken critic of the government. Neither has he been shy about voicing his support for exiled cleric Fethullah Gulen. In August 2016, Kanter temporarily changed his Twitter handle to “@Enes_Kanter_Gulen.”

At a post-practice press conference on Dec. 20, Kanter spoke about his views.

“But it’s not like that in Turkey. You cannot criticize or you cannot even say nothing bad about the dude, Erdogan. Just like say he’s a bad guy, and you’re in a prison. It’s politics. People can choose or say whatever they want to say. I think right now the situation there is pretty messed up.”

Kanter concluded his press conference by ensuring everybody that he was there to play ball, not to play politics.

“I don’t let all this distract me or my teammates. If I step on that court and if I think about even a second what’s going on in my life, then I’d be selfish and I’d be cheating my teammates,” he said.

“Right now, my focus is just going out there and having fun with my teammates, man. Just keep smiling.”

"My focus right now is going out there & playing basketball." – @Enes_Kanter #Knicks https://t.co/IbwGIOU43o

Turkey has long been a divided nation, forged out of disparate parts, and held together by forceful personalities or threatening force — Turks and Kurds, Muslims and non-Muslims, and lately, people who favor the popularly elected President Erdogan and people who prefer his exiled rival, Islamic preacher Fethullah Gulen. President Erdogan leads the Justice and Development Party (AKP) rooted in conservative Islam.

Turkey suffered an attempted military coup in July of 2016. Soldiers in tanks were reported to roll down the streets of the capital, Ankara, to seizing control of the nation from President Erdogan who away from the capital on vacation at the time.

The coup was suppressed with minimal loss of life, but Erdogan used the attempted coup to purge tens of thousands of government workers, from the lowest civil servants to ten members of Turkey’s highest administrative court.

Journalists were also jailed. Erdogan has long had an aversion to a free press. According to Freedom House, the nation is 71st among 100 nations rated in press freedom, and its ranking is dropping.

Many, including even the relatively conservative Forbes magazine, called the powers Erdogan seized or created for himself as a result of the coup “dictatorial.” He won the election with 52 percent of the vote, with his supporters seemingly happy to have a strong hand at the helm.

President Erdogan blamed the coup on an exiled rival—one who lives in America.

Imam Fethullah Gulen leads a semi-political/semi-spiritual movement called Hizmet (Service). The Islamic religious leader, who has lived in Pennsylvania in the U.S. since 1999, is a staunch supporter of Islam and also a staunch advocate of democracy, education, science and interfaith dialogue.

Publicly, Gulen said he condemned “in the strongest terms, the attempted military coup in Turkey” and said unequivocally that he was in no way involved.

That didn’t stop Erdogan from including any possible Gulen supporters in his purge.

And how does a coup in Turkey and a cleric in Pennsylvania impact an NBA star in New York City?

In fact, Enes Kanter was not in New York, but in Romania, when he felt the strong fisted rule of Turkey’s leader impact his life.

Due to his support of Gulen, Turkey cancelled Kanter’s passport while he was traveling in Romania on behalf of his philanthropy, the Enes Kanter Light Foundation, in May of 2017. Kanter’s foundation is dedicated to helping children in need of food shelter, and education.

I'm being held at Romanian airport by Police!! pic.twitter.com/uYZMBqKx54

Kanter was detained for several hours by Romanian officials, until he was finally granted leave to return to the U.S. where he lives as a resident alien—he holds a Green Card.

Kanter was not “detained” in the sense of being in custody. He was simply not allowed to leave the airport to enter Romania. Still he found the treatment offensive. And of course, he tweeted about it.

Kanter’s own father Mehmet is a strong Erdogan supporter, or claims to be. In 2016, Mehmet Kanter wrote a letter to a pro-Erdogan Turkish newspaper, Daily Sabah, apologizing for his son’s actions and disowning his son.

But Mehmet Kanter is still living in Turkey with his wife and relatives. Perhaps by speaking out strongly against his son, Kanter is buying some measure of safety for the family in Turkey.

Mehmet Kanter has already experienced arrested on his son’s behalf. In June of 2017, Turkey picked up the elder Kanter in what the Andolu news service called “ part of the ongoing investigation into FETO.”

FETO is what the Turkish government calls followers of Fethullah Gulen. Whether the arrest was for the possibility that Enes learned support for Guklen from his father, or as a retaliatory act aimed at warning Enes, in either case, the incident has had little effect on Enes Kanter’s passion to be vocal about his views.

The young NBA star responded to his father’s arrest by publishing a statement. Enes said, “For a second please think and imagine, if something like this is happening to an NBA player, what is happening to the people with no voice or podium to speak on?

“There could be hundreds of thousands of people that are detained, tortured, or murdered that we are not hearing about. Freedom of expression is a basic human right, and I ask the WORLD to join me in seeking justice and equality for all and to reject oppressive regimes and dictatorships.”

Kanter mentioned his parents’ plight in his post-practice news conference, “They [the Turkish government] hate when I talk to you guys in front of all of these cameras, these microphones. They hate it,” Kanter claimed.

“But that’s why they’re doing all this, ‘Oh we’re going to take his dad away, we’re going to put him in prison.’ It doesn’t really bother me. We made the playoffs, it will drive him [Erdogan] crazy.”