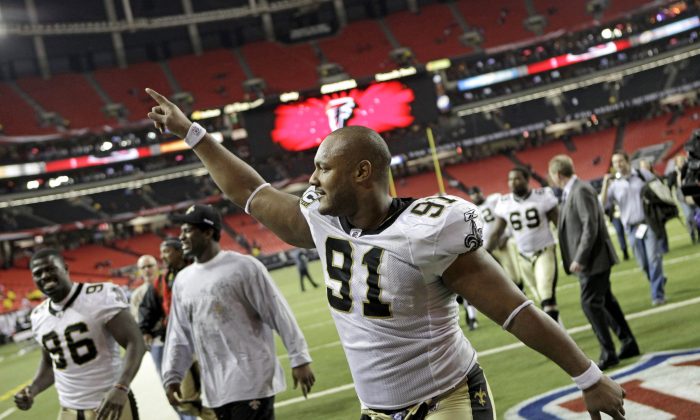 In this Dec. 27, 2010, file photo, New Orleans Saints defensive end Will Smith (91) celebrates a 17-14 win over the Atlanta Falcons in an NFL football game in Atlanta. Smith was fatally shot after a traffic accident in New Orleans. (AP Photo/David Goldman, File)
US

Former Saints star Will Smith was “executed” by an irate driver as Smith’s wounded wife lay nearby during the chaos that followed an April 9 traffic accident, a prosecutor told a New Orleans jury Sunday during closing arguments in the shooter’s trial.

Racquel was hit first when gunshots rang out that night, a bullet tearing through her leg, Assistant Orleans Parish District Attorney Jason Napoli told the jury as he recounted the crime.

“She then listened as the love of her life, the father of her children, was executed,” Napoli said, noting that Hayes pumped eight .45-caliber bullets into Smith—one in the side, seven in the back.

Napoli dismissed defense claims that a drunken Smith was the aggressor and that Hayes was defending himself in accordance with Louisiana’s “stand your ground” law.

Napoli said Hayes was the aggressor, having armed himself after he purposely rammed his Hummer into Smith’s Mercedes SUV. Hayes has acknowledged he believed Smith had bumped the Hummer moments before and a few blocks away from the crime scene.

Hayes’ defense lawyer, John Fuller, was to respond with his own argument later Sunday and jury deliberations were expected to begin later in the day.

Hayes took the stand Saturday, insisting that he only fired after Smith grabbed a gun from his damaged Mercedes—and after he heard what sounded like a gunshot.

“I knew for a fact that I was going to get shot,” Hayes told the jury.

A pathologist’s report showed Smith was legally drunk after spending time at the city’s annual French Quarter Festival, a bar and two restaurants. He was driving with a group of friends in several cars when his SUV appeared to lightly bump the Hummer—a bump captured on surveillance videos. Smith then drove off, with Hayes in pursuit.

Hayes vehemently denied that he intentionally rammed the SUV several blocks later. He told the jury that he was trying to dial 911 and didn’t realize how close they were as he tried to report a hit-and-run.