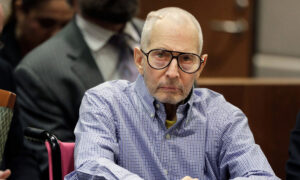 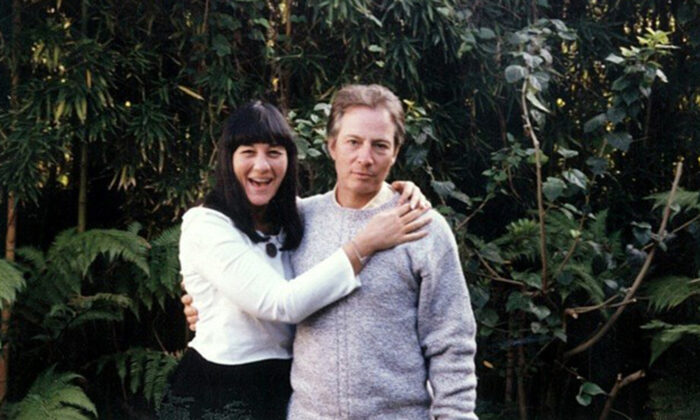 Susan Berman (L) and Robert Durst pose sometime in the mid- to late 1990s. (Courtesy of Sareb Kaufman/HBO)
US News

Prosecutors in the Los Angeles murder trial of millionaire Robert Durst, accused of killing his best friend to stop her incriminating him in the disappearance of his wife, are scheduled to start a second day of opening statements Thursday.

On Wednesday, they outlined a story that began around the 1982 disappearance of Durst’s wife, Kathleen McCormack Durst, while she was apparently en route to medical school in New York. It ended with his arrest in March 2015.

The jury is expected to hear how Durst allegedly shot his longtime confidante, Susan Berman, in the head on December 23, 2000, at her Beverly Hills home. Durst, 76, pleaded not guilty to the first-degree murder charge, and he has repeatedly denied killing Berman.

Lead prosecutor John Lewin, a cold-case specialist from the Los Angeles County District Attorney’s Office, said Berman had been Durst’s confidant since their days at UCLA. Berman, the daughter of a notorious mobster, would “go to almost any length to protect” Durst, the prosecutor told the jury.

One of Berman’s friends, Hollywood producer Linda Obst, will testify Berman told her that she had played a role in covering up Durst’s wife’s disappearance, Lewin said.

On the day in 1982 that she was supposed to arrive at Albert Einstein Medical School to continue her studies, a school official received a call from a woman saying she was Kathleen McCormack Durst, Lewin said. The caller said she was sick and wouldn’t make it that day, Lewin said.

“Susan Berman disclosed she made the call,” Lewin said.

Kathleen Durst’s body has never been found and Robert Durst has not been charged in her death, but Lewin spent a lot of time Wednesday talking about her troubled marriage to Durst.

In the late 1980s, Berman fell on hard times financially after her marriage broke up and she lost money she’d invested in a Broadway play, Lewin said. Though Durst was known for being cheap, he gave Berman large amounts of money in exchange for guarding his secret, Lewin said.

Berman was killed hours before she was due to speak with police about the disappearance of Durst’s wife. Berman’s body was found the day after she was fatally shot.

Lewin told the jury Berman likely knew the gunman who “executed” her “at very short range.”

“Susan knew her killer and … she freely and voluntarily let the killer into her house,” Lewin said, describing her as a paranoid person who would never open her door to a stranger.

Lewin told the jurors on Wednesday that “Durst killed Kathie when they were spending the weekend together.”

Durst’s long time lawyer, Dick DeGuerin, seated at the right of the defendant, objected. “I’ve got to object to this conclusion that Bob Durst killed Kathie,” DeGuerin told the judge, saying it was not permissible and Lewin was presenting evidence.

The judge overruled the objection and urged the two lawyers to calm down.

“I can do whatever I want,” Lewin said, describing Durst’s attitude dating back decades.

Now frail and slow-moving, Durst is confined to a cell in a jail medical unit, according to the Los Angeles County Sheriff’s Department.

Photos released last summer by the sheriff’s department show magazine pages, advertisements and photographs taped to the wall of his cell. There are stacks of books and magazines, with titles ranging from “War and Peace” to The New Yorker.

The trial could last several months. The case centers on largely circumstantial evidence, including Durst’s infamous muttering on the HBO documentary “The Jinx” that he had “killed them all.”

Jurors are expected to hear potentially incriminating statements he made during the three-hour interview with Lewin after his New Orleans arrest.

There is little physical evidence in Berman’s nearly 20-year-old unsolved death. There are no eyewitnesses and no murder weapon.

But a key piece of evidence is the so-called “cadaver” note, a cryptic letter sent to police with Berman’s address and the word “cadaver” in caps that led detectives to her body.

“We know that the killer wanted Susan’s body to be found,” Lewin told the jury.

The prosecutor said Durst used word “cadaver” in the note, because his missing wife had gone to medical school—a statement that drew an objection from the defense.

In “The Jinx,” Durst said the letter could have been sent only by Berman’s killer. Defense lawyers previously denied Durst wrote the note, and they tried to exclude from trial handwriting evidence about it.

In a court filing late last year, however, lawyers for the real estate mogul reversed course and acknowledged that Durst penned the anonymous note. “This does not change the fact that Bob Durst did not kill Susan Berman,” DeGuerin said at the time.

In the HBO documentary, filmmakers confronted Durst with another letter he once mailed Berman, with nearly identical handwriting to the “cadaver” note. In both, Beverly Hills was misspelled as “BEVERLEY.”

Immediately after the last shot of “The Jinx” finale, Durst went into the bathroom, apparently not realizing his microphone was still on.

“There it is. You’re caught,” he said. He rambled a series of seemingly unrelated sentences before saying, “He was right. I was wrong.”

Then, he muttered, “What the hell did I do? Killed them all, of course.”

The defense has said it will show Durst’s statements were heavily edited and not uttered in the order in which they appeared in the documentary.

Jurors are also expected to hear statements Berman made about allegedly helping Durst build an alibi for the death of his wife, according to prosecutors.

Durst has maintained he had nothing to do with his wife’s disappearance. She was declared legally dead in 2017.

Prosecutors will argue that McCormack’s death was the impetus for two other alleged killings that have long shrouded Durst in suspicion—Berman’s killing and the 2001 slaying and dismemberment of a neighbor in the coastal Texas city of Galveston.

Superior Court Judge Mark E. Windham ruled in January that jurors can hear about Durst wanting his wife to have an abortion before she disappeared. The judge called the evidence relevant to show motive “in the disappearance of Kathie Durst” as well as Berman’s murder.