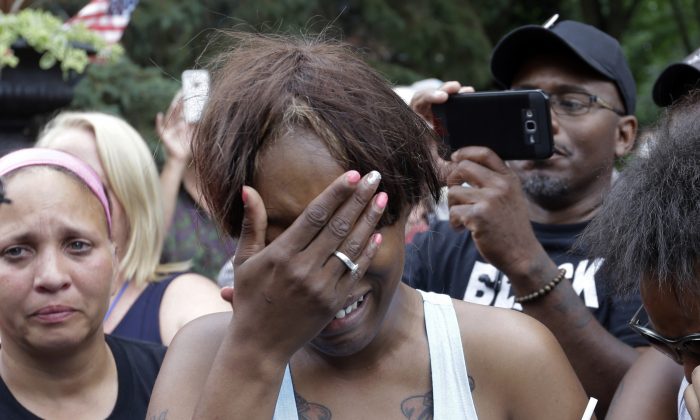 Diamond Reynolds, the girlfriend of Philando Castile of St. Paul, cries outside the governor's residence in St. Paul, Minn., on Thursday, July 7, 2016. Castile was shot and killed after a traffic stop by police in Falcon Heights, Wednesday night. A video shot by Reynolds of the shooting went viral. (AP Photo/Jim Mone)
Crime and Incidents

FALCON HEIGHTS, Minn.—A Minnesota prosecutor said Friday he has asked for a “prompt and thorough investigation” following the fatal police shooting of a black motorist whose girlfriend streamed the gruesome aftermath of the shooting in a St. Paul suburb live on Facebook.

Ramsey County Prosecutor John Choi said the video is part of the investigation into the shooting Wednesday night of Philando Castile. The school cafeteria supervisor was shot “for no apparent reason” while reaching for his wallet after telling the officer he had a gun and a permit to carry it, his girlfriend said in the video.

Choi declined to comment on the investigation. Police also have refused to release details, including what led up to the traffic stop, why Castile was pulled over or why the officer drew his gun.

But the prosecutor said the shooting highlighted the need for better interactions between police and black residents.

“We must do better in our state and in our nation to improve police-community interactions to ensure the safety of everyone in this country, but particularly the safety of African Americans, who disproportionately lose their lives as a result,” he said.

Choi said his office has not yet met with Castile’s family, saying it wouldn’t be appropriate until investigators completed their work. But he said the ongoing investigation was a top priority and that he would decide whether to turn it over to a grand jury after investigators presented their findings to his office.

The prosecutor also acknowledged the wide reach of the Facebook video.

“It being transmitted to so many people, and then having the reaction from this community, the nation, the world… I understand the gravity of all of that,” he said. “This has become something that people have expressed a lot of concern about. Because what is depicted in the video, it just makes you sad to watch all of that unfold.”

His comments came a day after Minnesota Gov. Mark Dayton jumped into a suddenly reignited national debate over how law enforcement treats people of color, saying police likely wouldn’t have fired if Castile had been white.

“Would this have happened if those passengers would have been white? I don’t think it would have,” Dayton said to a crowd that gathered outside his residence all day and night Thursday.

Hours after Dayton’s remarks, gunmen shot and killed five police officers and wounded six more amid protests in Dallas over Castile’s killing and a second fatal police shooting of a black man, 37-year-old Alton Sterling. Sterling was killed Tuesday in Baton Rouge, Louisiana, after he scuffled with two white police officers outside a convenience store. Portions of that shooting were also caught on video.

Castile was shot in Falcon Heights, a mostly white community of 5,000 served primarily by the nearby St. Anthony Police Department.

In the video, his girlfriend, Diamond Reynolds, describes being pulled over for a “busted tail light.” Reynolds told reporters Thursday that the 32-year-old Castile, of St. Paul, did “nothing but what the police officer asked of us, which was to put your hands in the air and get your license and registration.”

The video she streamed Wednesday night on Facebook Live shows her in a car next to a bloodied Castile slumped in a seat. A clearly distraught person who appears to be a police officer stands at the car’s window, tells her to keep her hands up and says: “I told him not to reach for it. I told him to get his hand out.”

“You shot four bullets into him, sir. He was just getting his license and registration, sir,” Reynolds calmly responds.

State investigators named the two officers involved in the Minnesota shooting as Jeronimo Yanez and Joseph Kauser. Both had been with the St. Anthony Police Department for four years and were put on administrative leave, as is standard.

Yanez approached Castile’s car from the driver’s side, and Kauser from the passenger side, according to the Minnesota Bureau of Criminal Apprehension. The agency said Yanez opened fire, striking Castile multiple times.

Several videos, including squad car video of the incident, have been collected, but St. Anthony officers don’t wear body cameras, the agency said.

The bureau did not give the officers’ races. Reynolds described the officer who shot Castile as Asian.

The previous year’s report includes a photo of Yanez solemnly standing guard at a memorial to fallen officers at the state Capitol.

Thomas Kelly, an attorney for Yanez, did not immediately return a call seeking comment after the officers were identified Thursday.

The U.S. Justice Department, which immediately launched a civil rights investigation into the Baton Rouge shooting, said it would monitor Minnesota’s investigation. Dayton said he and other state officials would ask for stronger federal involvement in the case.

At a vigil Thursday evening outside a Montessori school where Castile worked, his mother, Valerie Castile called her son “an angel.” Though she recalled cautioning him to always comply with police, she said she never thought she would lose him.

“This has to cease. This has to stop, right now,” she told the crowd.

Hundreds of demonstrators braved rain showers and gathered outside the governor’s mansion in St. Paul. The group swelled to over 1,000 for a time as people marched from the school vigil. Dayton waded through the crowd as protesters chanted: “What do we want? Justice! When do we want it? Now!”

Some 200-300 protesters with a large supply of donated food and water were still there as midnight approached.

On a trip to Poland, President Barack Obama called on law enforcement to root out bias in its ranks, saying the Minnesota and Louisiana shootings were symptoms of a “broader set of racial disparities” in the justice system that aren’t being fixed quickly enough.

“When incidents like this occur, there’s a big chunk of our fellow citizenry that feels as if it’s because of the color of their skin, they are not being treated the same,” Obama said several hours before the Dallas shootings. “And that hurts. And that should trouble all of us.”

Speaking later, he said America is “horrified” over the Dallas shootings and there’s no possible justification for the attacks.