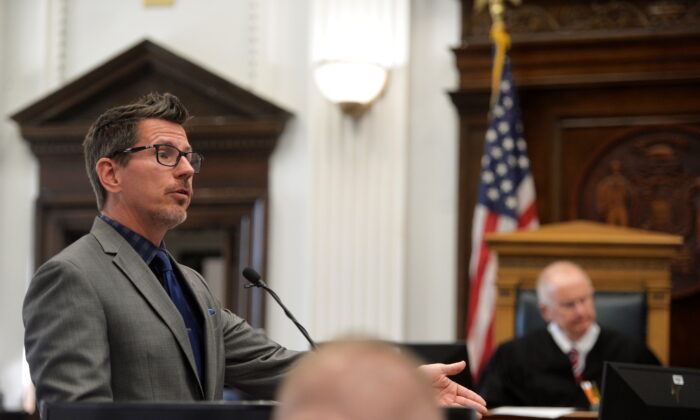 A prosecutor in the murder trial of Kyle Rittenhouse on Monday accused the teen of provoking the “entire incident” that led to the shooting of three people during riots and unrest in Kenosha, Wisconsin, last year.

Kenosha County Assistant District Attorney Thomas Binger during closing arguments said the jury should ignore Rittenhouse’s defense claim that he was attacked and fired his weapon, injuring one and killing two. Binger said that Rittenhouse initiated the encounter by brandishing his gun.

The AR-15-style rifle is “what provokes this entire incident,” Binger said. “If you are the one who is threatening others you lose the right to self-defense,” the prosecutor added.

Rittenhouse’s lawyers, in response, highlighted considerable video evidence presented at trial supporting Rittenhouse’s argument that he was attacked. The defendant, who took the stand last week, pleaded not guilty.

Attorney Mark Richards accused Binger of “lying” and “misrepresenting” the evidence when he said Rittenhouse provoked the incident. Rittenhouse, he added, “was taking off” when shooting victim Joseph Rosenbaum and others started chasing him.

Richards said Rosenbaum was “leaping” and “lunging” at the defendant and his “hand was on the gun.”

He continued to say that “we don’t play fast and loose with the facts” before asserting that “Rosenbaum was a bad man. He was a rioter. And my client had to deal with him alone.”

Rittenhouse, 18, is charged with killing Rosenbaum, 36, and Anthony Huber, 26, and wounding Gaige Grosskreutz, 28, on Aug. 25, 2020. The shootings took place in the midst of Black Lives Matter protests that descended into rioting, arson attacks, and looting.

“I didn’t intend to kill them. I intended to stop the people who were attacking me,” Rittenhouse said during his cross-examination last week.

But on Monday, Binger argued that Rittenhouse had gone out of his way to travel to Kenosha from Antioch, Illinois, during the unrest, although Rittenhouse testified that his father lives in Kenosha. Other family members also live in the Wisconsin city, located more than an hour north of Chicago.

“This isn’t a situation where he was protecting his home or his family,” Binger argued.

Earlier in the day, Judge Bruce Schroeder morning dismissed a misdemeanor weapons charge against the teen, noting that he had issues with the way in which the Wisconsin statute was written. His attorneys argued that Wisconsin’s statute had an exception, involving the barrel length of the rifle or shotgun, that could be read to clear Rittenhouse of the weapons charge.