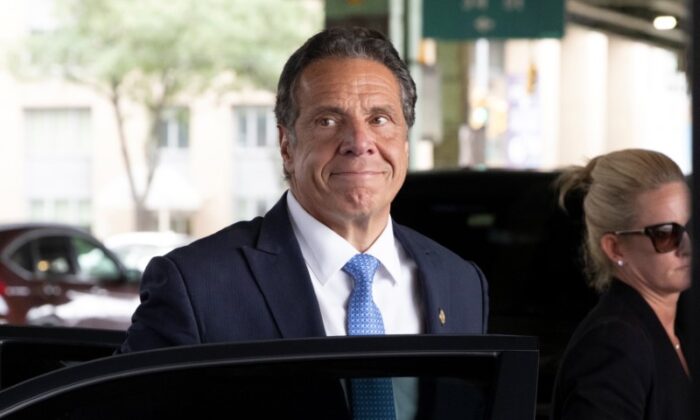 A New York prosecutor on Tuesday dropped a groping charge against former Gov. Andrew Cuomo, alleging he could not prove the case beyond a reasonable doubt.

Albany County District Attorney David Soares, a Democrat, said that prosecutors in his office found the woman who filed the complaint both “cooperative and credible,” but a review of the evidence led them to conclude “that we cannot meet our burden at trial.”

Soares notified the court that prosecutors wouldn’t be prosecuting the matter and asked for the charges filed by the Albany County Sheriff’s Office dismissed.

“I, like most New Yorkers, remain deeply troubled by allegations like the ones at issue here,” Soares said. “Such conduct has no place in government or in any workplace. Although avenues for criminal prosecution in these cases are somewhat limited, I encourage victims of workplace harassment and abuse to continue to come forward and bring these issues to light so that these important discussions can continue.”

The decision not to prosecute the case is not related to any possible civil liability, the prosecutor’s office said.

Brian Premo, who is representing the woman in question, told The Epoch Times in an email that his client “had no control over the filing or prosecution of criminal charges.”

“She had no authority or voice in those decisions. The only thing she has any power over is her resolution to continue to speak the truth and seek justice in an appropriate civil action which she will do in due course,” he said.

Soares said in a letter in November 2021 that the criminal complaint filed by the sheriff was “potentially defective” because it allegedly left out evidence that could be exculpatory. The complaint accused Cuomo of touching a woman under her shirt.

An investigation by a law firm on behalf of New York legislators concluded there was “overwhelming evidence” that Cuomo sexually harassed multiple women while in office, after a team tapped by New York Attorney General Letitia James found Cuomo both sexually harassed and abused women, including several who were working for him at the time.

Cuomo eventually stepped down due to the allegations, but has maintained that he did not harass anyone.

Additionally, the Manhattan District Attorney’s office opted against bringing charges against Cuomo for his administration misleading the public about how many nursing home residents died with COVID-19.

Elkan Abramowitz, who represented Cuomo’s administration, said in a statement that the investigation showed “there was no evidence to suggest that any laws were broken.”