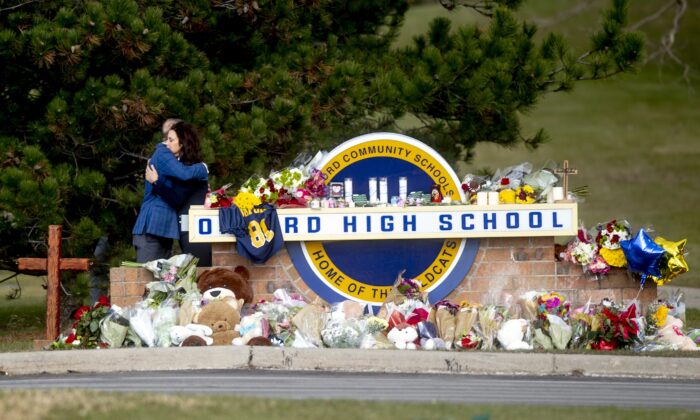 Prosecutor: Charges Not Ruled Out Against Oxford High School Staff After Shooting

School officials who work at Michigan’s Oxford High School could face criminal charges in connection to last week’s shooting that left four students dead, a prosecutor involved in the case said on Dec. 6.

Speaking during an interview, Oakland County Prosecutor Karen McDonald said Oxford High School staff had a legal basis to search alleged shooting suspect Ethan Crumbley’s backpack last week. On Nov. 30, the day of the shooting, Crumbley and his parents were called into a meeting with school staff regarding Crumbley’s allegedly violent and disturbing drawings depicting shootings.

McDonald had previously said the meeting, in which school staff members mandated that Crumbley seek counseling, occurred before he allegedly opened fire on his classmates. On Dec. 6, she told CNN that school officials should have searched the 15-year-old’s backpack before he returned to class.

“We don’t know exactly if that weapon was in his bag, where it was. We just know it was in the school and he had access to it,” McDonald told the media outlet.

When asked about whether prosecutors may charge school officials, she said, “We haven’t ruled out charging anyone.”

Over the weekend, Oxford High School Superintendent Tim Thorne said that Crumbley had told school officials during the meeting on Nov. 30 that the “drawings and written statements” that alarmed a teacher were actually for a video game that he was working on.

“The student was immediately removed from the classroom and brought to the guidance counselor’s office, where he claimed the drawing was part of a video game he was designing and informed counselors that he planned to pursue video game design as a career,” Thorne said.

He alleged that “at no time” did school officials believe Crumbley may “harm others based on his behavior, responses, and demeanor,” because the teen “appeared calm.”

“Despite media reports, whether or not the gun was in his backpack has not been confirmed by law enforcement to our knowledge nor by our investigation at this time,” Thorne said.

Crumbley is accused of shooting and killing four students—identified as Madisyn Baldwin, 17; Tate Myre, 16; Hana St. Juliana, 14; and Justin Shilling, 17—and wounding seven others during the Nov. 30 incident. Later, his parents, Jennifer and James Crumbley, were charged with four counts of involuntary manslaughter each before the two were captured in Detroit on Dec. 4 after a police-involved manhunt, according to McDonald.

The teen and his parents are being held in the same jail, although they can’t communicate with one another, Oakland County Sheriff Mike Bouchard said during a news conference on Dec. 4. They were all placed on suicide watch out of an abundance of caution.

James and Jennifer Crumbley pleaded not guilty to the charges, which were brought forth as prosecutors accused them of giving their son unrestricted access to the firearm that the teen is accused of using during last week’s shooting.

The parents’ attorneys, in statements to media outlets, said they were planning on turning themselves in, characterizing reports that they tried to evade capture as false. In a Dec. 4 news conference, Detroit Police Chief James White claimed that when they were located, James and Jennifer Crumbley “appeared to be hiding in the building” and were “very distressed” when they were located by law enforcement.

But the attorneys said the pair “intend to fight this case in the courtroom and not in the court of public opinion. We know that in the end the entire story and truth will prevail.”

Oxford High School didn’t respond to a request for comment by press time.