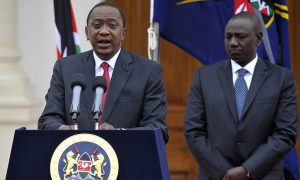 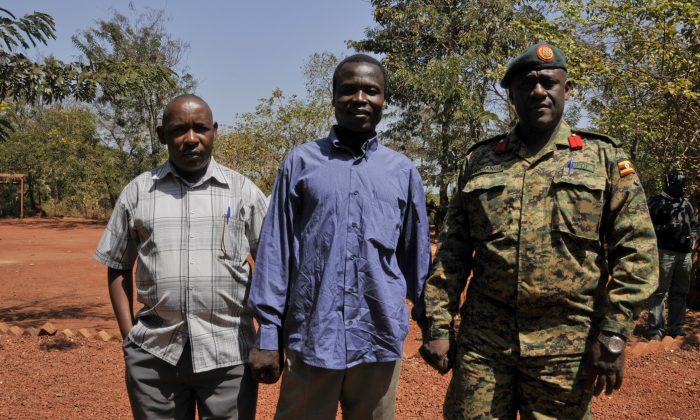 A man said by the Uganda People's Defence Force (UPDF) to be the wanted Lord's Resistance Army (LRA) commander Dominic Ongwen, center stands with Ugandan Contingent Commander to the African Union Regional Task Force Col Michael Kabango (R), and another unidentified man (L), prior to being handed over by the UPDF to the African Union Regional Task Force who later handed him over to Central African Republic authorities, in the Central African Republic, on Jan. 16, 2015. Central African Republic's Seleka rebels, who once overthrew the government, say they're entitled to a $5 million reward from the U.S. government because they say they captured and handed over the wanted international war crimes suspect Dominic Ongwen to American forces. (AP Photo/Uganda People's Defence Force, Mugisha Richard)
Africa

THE HAGUE, Netherlands—The prosecutor for the International Criminal Court urged renewed efforts Wednesday to arrest notorious militia leader Joseph Kony, after one of his top commanders was taken into custody to face charges of leading a reign of terror in central Africa.

Prosecutor Fatou Bensouda said in a statement the victims of atrocities committed by Kony’s Lord’s Resistance Army “have waited far too long and deserve to see justice done.”

Dominic Ongwen, one of Kony’s top commanders, was transferred to the court’s detention center Wednesday, two weeks after being taken into custody in Central African Republic.

Refugees Past and Present, Their Faces and Stories

LRA Rebel Commander to Be Tried by ICC in The Hague

His arrest came nearly a decade after he, Kony and other LRA leaders were indicted. The other indicted suspects have since died, leaving Kony the only fugitive among the shadowy Ugandan group’s commanders.

Bensouda emphasized the horror caused by Kony’s forces for over 25 years.

“The LRA has reportedly killed tens of thousands and displaced millions of people; terrorized civilians, abducted children and forced them to kill and serve as sex slaves. They have hacked off limbs and horribly disfigured men, women and children,” Bensouda said.

Ongwen, himself reported to be a former child soldier, was among the group’s leaders who bear greatest responsibility for “unimaginable crimes against humanity and war crimes,” she said.

Ongwen will make his first appearance before ICC judges on Jan. 26, the court announced, to confirm his identity and read out the charges against him. He faces three counts of crimes against humanity and four of war crimes, allegedly committed in 2004, when prosecutors say he commanded the LRA’s Sinia Brigade.

“The transfer of Dominic Ongwen to the ICC is a major step for those affected by the LRA’s long history of crimes,” said Daniel Bekele, Africa director at Human Rights Watch. “All eyes will now be on the ICC to deliver fair, meaningful justice that will resonate with the LRA’s victims.”