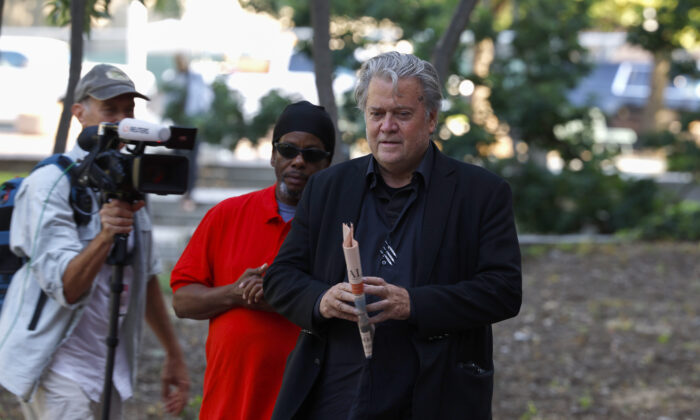 WASHINGTON—A prosecution witness in the case against former White House aide Steve Bannon acknowledged on the stand on July 20 that she has known one of the prosecutors for some time.

The witness, Kristen Amerling, said she and one of the prosecutors “overlapped” on the House Oversight Committee while it was under the leadership of former Rep. Henry Waxman (D-Calif.).

Amerling said she’s also been part of a book club for five years of which the prosecutor, Molly Gaston, is a member.

The club primarily comprises former aides to Waxman, she said.

Gaston did not respond to a request for comment.

Amerling said that neither of the women has attended the club at the same time in a long time.

Amerling is a lawyer working for the House of Representatives special committee probing the Jan. 6, 2021, breach of the U.S. Capitol. She has donated to Democrats before.

Earlier in the day, Amerling said that one of the sources of the claims presented in a letter to Bannon—who worked for the White House in the early days of the Trump administration—was a book by reporters Bob Woodward and Robert Costa called “Peril.” It is depicted as a nonfiction account of the transition from former President Donald Trump to President Joe Biden.

“Do you read nonfiction in your book club?” asked Evan Corcoran, one of Bannon’s lawyers.

The club “generally reads fiction,” Amerling said, noting she has not participated in more than a year. “I don’t even know what they are reading now.”

After an objection was overruled, Corcoran asked if the club ever discusses “the political topics of the day.”

Members discuss “a whole range of topics,” Amerling said. “Given the careers of the folks involved in the book club, it is not unusual that we talk about politics one way or another.”

Bannon is on trial for two counts of contempt of Congress, after he declined to provide materials or testify to the Jan. 6 panel.

Amerling testified that “it is very unusual for witnesses subject to a subpoena to say they outright will not comply.”

In refusing to cooperate with the Jan. 6 panel, Bannon has put forth executive privilege claims by Trump, but prosecutors say the total resistance was unlawful.

Rep. Bennie Thompson (D-Miss.), the chairman of the panel, wrote in a letter in October 2021 to Bannon’s lawyers that “virtually all the documents and testimony sought by the Subpoena concern Mr. Bannon’s action as as a private citizen and involve a broad range of subjects that are not covered by executive privilege.”

The panel gave Bannon additional time to provide them with additional information about his claims, but the letter from Bannon’s lawyer did not include any details that convinced the panel to delay its effort, which was successful, to hold him in contempt.

Bannon, who left the White House in 2017, is accused of having information about the planning of activities that led to and informed the Capitol breach.

Corcoran later raised questions about the subpoena itself, wondering if any members of Congress were in Amerling’s office when she drafted it. Amerling said she did not recall.

“This is a human process so I want to know what human being made that decision that Steve Bannon should appear before the committee on Oct. 14 for a deposition?” Corcoran said.

They agreed that a subpoena without Thompson’s signature would lack validity. “What is reflected in the subpoena is determined by the chair of the committee,” Amerling said. She could not provide details about specific discussions leading up to the decision to subpoena Bannon.

The move was made with a deadline in mind, the lawyer indicated. The authorization for the special committee, which has mostly Democrat members and whose only Republicans are ardently anti-Trump, expires at the end of the year.

The government’s only other witness, FBI agent Stephen Hart, was called by Gaston. He recounted seeing posts by Bannon on the social media website Gettr in which Bannon shared news stories about him refusing to comply with the subpoena.

The social media links to news articles are “to add to the timeline” of Bannon’s defiance of the committee, Gaston said.

Corcoran noted that the posts were merely articles and established that Hart had interviewed Amerling.

“Did you learn in that interview that Ms. Amerling has known the prosecutor for 15 years?”