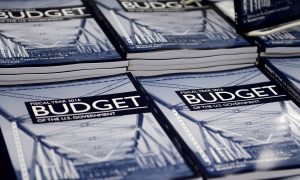 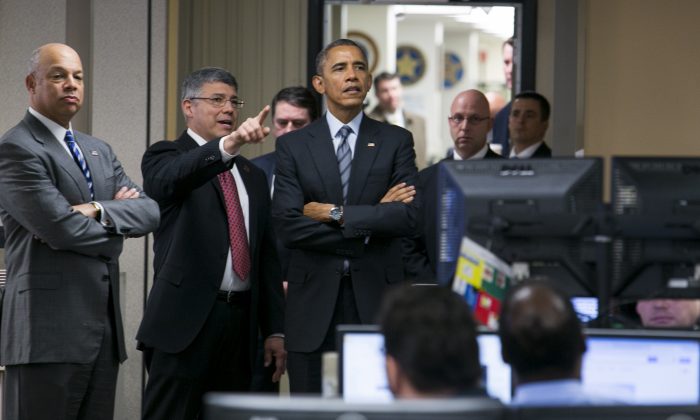 U.S. President Barack Obama is escorted by Jeh Johnson, Secretary Of Homeland Security, (L) and Richard M. Chavez, Director of Operations Coordination and Planning, (C) as he visits the National Operations Center (NOC) at the Department of Homeland Security in Washington, D.C., after speaking about the administration's fiscal year 2016 budget request released earlier in the day on Feb. 2, 2015. (Kristoffer Tripplaar-Pool/Getty Images)
Opinion

Posturing as the champion of needed public investments and fairness, President Barack Obama wants new taxes on the overseas earnings of American businesses, which would kill jobs and punish retired Americans.

Although special deals permit some corporations to pay low taxes, most pay a heavy burden. The estimated effective U.S. corporate tax rate is about 27 percent, well above the 20 percent imposed by other industrialized countries.

The United States is virtually alone in taxing the overseas profits of its multinationals when those are repatriated. This has encouraged U.S. firms to invest nearly $2.1 trillion of their earnings abroad, instead of bringing some of that money home to create jobs in America.

In his proposed $3.99 trillion budget for fiscal year 2016, the president now wants an immediate 14 percent tax levy on those assets to raise about $500 billion and to impose a 19 percent tax on future earnings to finance infrastructure investments.

Much of the $2.1 trillion in non-repatriated corporate overseas profits isn’t parked in foreign bank accounts. Rather, it is already invested by firms such as General Electric and Procter & Gamble in countries where cost considerations, trade barriers, and government-managed exchange rates require American companies to produce locally to sell in those markets.

Those investments can’t be readily liquidated to pony up $500 billion in new taxes. Instead, chief executives would siphon off cash needed for new projects here in the United States, and the new levies would severely damage the finances of firms such as General Motors and Microsoft.

All this would curtail research and development and product rollouts needed to maintain the jobs that Americans already have and would also destroy the prospects for adding millions of new jobs.

Local politicians love infrastructure spending—and remember that members of Congress are elected by local constituencies—because it permits them to throw big contracts to construction and engineering companies and labor unions that provide dollars and foot soldiers for their campaigns.

Getting more dollars for roads, bridges, and rail without increasing the 18.4 cents per gallon federal gas tax would surely appeal to members on both sides of the aisle, but it wouldn’t solve some basic problems.

Americans, and particularly millennials, are moving back to central cities but bending to powerful construction and homebuilder lobbies. State and local governments channel too much of the federal infrastructure subsidies that they receive into new roads to ever-more-distant suburbs, rather than addressing urban needs.

A pro-growth GOP Congress should redirect federal money toward rebuilding crumbling urban roads and overburdened transit systems and sink Davis–Bacon. After all, organized labor represents only about 7 percent of the private labor force, and fairness requires that unionized workers not enjoy privileged access to public projects at the expense of others.

Of course the president, a good Democrat, wants none of that, and by funding infrastructure by taxing corporate money allegedly “parked” abroad, it all sounds like taxing the rich for the greater good, but it isn’t.

S&P 500 companies represent about 80 percent of publicly traded companies and earn about half their profits abroad. Imposing U.S. taxes on top of the foreign taxes that they already pay will push down dividends and stock prices for companies such as Ford Motor, GE, and P&G.

Those are well represented in many Americans’ retirement portfolios, and the president’s proposal would thereby impose a stealth tax on the elderly.

The federal gas tax was last raised in 1993, and adjusting it in line with inflation to finance the federal contribution to infrastructure investment remains the fairest way to go. After all, drivers should pay for the roads and transit projects that relieve highway congestion.

Instead, the president wants to tax grandma to subsidize the AFL-CIO.