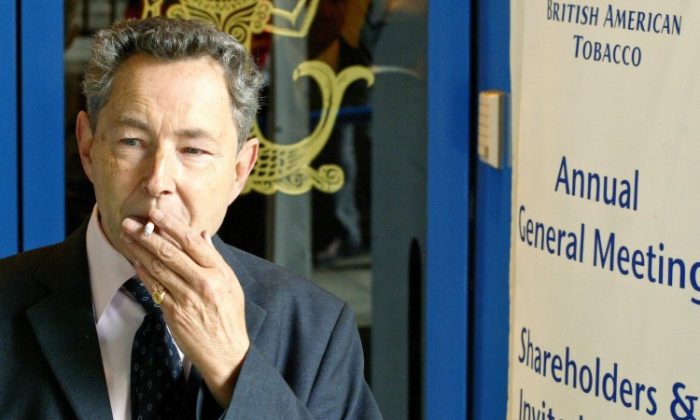 Anti-smoking groups in the U.K. are angry that local councils are investing pension funds in tobacco companies like British American Tobacco. (Carl de Souza/AFP/Getty Images)
US

LOS ANGELES—At William Mead Homes, where people live in 415 tidy if aging red-brick apartments on the edge of downtown Los Angeles, opinions on the federal government’s proposed ban on smoking both inside and outside of all public housing are about as plentiful as the scores of cigarette butts dotting the complex’s numerous green common lawns.

How will the government enforce such a wide-reaching possible regulation as the one proposed Thursday, smokers and non-smokers alike asked.

And whatever happened to the rights of people to do whatever they want in their own homes as long as they aren’t breaking the law, opined others.

“Do you really think the police are going to come into peoples’ homes because they’re smoking? I don’t,” said 21-year-old Aaron Castaneda, who grew up in the warren of two-story apartments built during World War II and now hemmed in by railroad tracks and warehouses.

“If people pay their rent, why can’t they smoke in their own house?” asked Castenada, a self-described light tobacco smoker who was carrying a pouch of roll-your-own with him Thursday.

“I think we all know smoking is a bad thing. I don’t smoke, and I don’t want people to smoke around me,” he said as he stood on a common front lawn littered with cigarette butts.

“People have privacy rights if they’re over 18,” he continued. “But if there are kids in the house, smoking is not good for them and it’s got to go. So yeah, I support a ban.”

The issue of children’s safety also seemed to be a keystone in the government’s move to get smoking out of public housing.

“Everyone — no matter where they live — deserves a chance to grow up in a healthy, smoke-free home,” said the surgeon general, Dr. Vivek Murthy. “There is no safe level of secondhand smoke.”

Smoking is already banned in about 20 percent of the nation’s federally subsidized housing. The Department of Housing and Urban Development wants to extend that to the other 940,000 units around the country, in cities such as Los Angeles, New York, Atlanta and Miami.

HUD Secretary Julian Castro said a nationwide ban would protect more than 760,000 children and save about $153 million a year in health care costs, repairs and preventable fires.

The proposed rule would ban lit tobacco products — cigarettes, cigars or pipes — in all residences, indoor common areas and administrative offices. Smoking also would be prohibited outdoors within 25 feet of buildings. Electronic cigarettes that emit vapor but not smoke would not be subject to the ban.

The public has 60 days to comment, and the ban would take effect 18 months after the rule is finalized.

Ed Cabrera, a HUD spokesman in San Francisco, said the policy would probably become part of each lease agreement, and enforcement would depend largely on complaints by other residents.

“Tenants who don’t comply and continue to smoke could face possible eviction,” he said.

That’s all well and good, said some residents of William Mead Homes, but they don’t like the idea of ratting out tenants in a neighborhood that counts among its residents members of Dog Town, one of Los Angeles’ oldest street gangs.

“I’d be afraid to tell anyone to move away,” said Maria Alvarez, noting that gang members frequently congregate on the lawn just outside the apartment she’s lived in for 23 years to smoke both marijuana and tobacco. She said they and the police pretty much ignore each other.

Some smokers, like Manuel Luna, say they would abide by the ban, however, noting it is indeed for the benefit of the large numbers of children who live in the neighborhood and frolic on its shiny playground equipment.

“I already go outside to smoke,” he said in Spanish.

“And not because of the smell,” his 21-year-old son, Manuel Jr., added in English. “He doesn’t want any family members to get secondhand smoke.

Still, this microcosm of American public housing reflected what a conflicting issue this could be.

Luna’s next-door neighbor, 77-year-old Juan Manuel Cabrera, said he’s been smoking for 67 years and no federal edict is going to stop him now from lighting up inside the apartment he’s called home for 28 years.

“When I’m in my house I don’t bother nobody and nobody bothers me,” Cabrera said as he relaxed on his porch with his chubby brown Chihuahua, Dunko.

An ashtray sat at arm’s reach and a pack of Marlboro Lights was in his pocket.