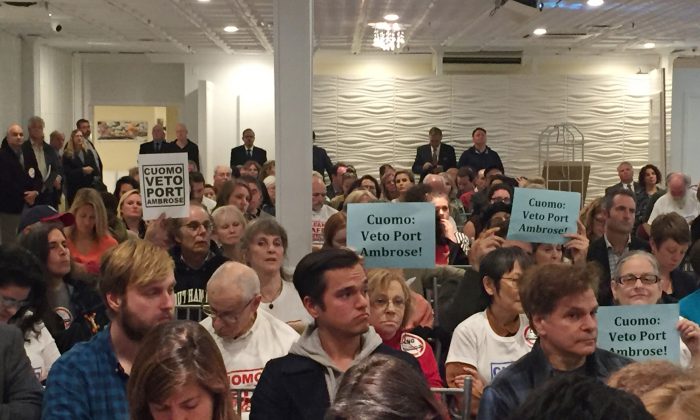 Signs opposing a proposed offshore liquefied natural gas pipeline can be seen in the crowd during a meeting at the Long Beach Hotel in Long Beach, N.Y., on Nov. 2, 2015. Liberty Natural Gas LLC wants to build an offshore gas terminal in the waters between New York and New Jersey that will pump liquefied gas through a subsea pipeline into an existing pipeline running between the two states. (AP Photo/Michael Balsamo)
New York

LONG BEACH, N.Y.—Environmentalists and some residents of coastal communities are fighting a proposed liquefied natural gas transfer point in the waters off New York and New Jersey, saying it could endanger the environment and be a tempting target for terrorists.

But Canada-based Liberty Natural Gas LLC says the proposal to develop the deep-water docking station known as Port Ambrose will help bring in more supplies of clean energy and lower some of the most expensive home heating bills in the nation.

The docking station about 19 miles off Jones Beach on Long Island, and 29 miles off Long Branch, New Jersey, would serve as a transfer port for ships carrying the liquefied natural gas to unload and pump the gas to New York City and Long Island. If approved, the port would be up and running in 2018.

“You’re never going to see the ship; you’re not going to be aware of it,” said the company’s president, Roger Whelan.

The federal Maritime Administration is currently reviewing Liberty’s application, but environmentalists are urging Gov. Andrew Cuomo and Chris Christie to veto the proposal, arguing it is dangerous and unnecessary. If either governor objects, federal regulations require the agency to deny Liberty’s application. The timing for a final decision remains unclear.

Christie vetoed a prior version of the proposal in 2011 and vowed at the time that his “opposition to this will continue as long as I’m governor.” Cuomo said last month there were “serious questions” lingering around the project. A spokeswoman for Cuomo told The Associated Press on Friday that the project is “still under review.”

Officials have held a series of public hearings, which at times have been overrun by protesters shouting for the governors to take action. At one of the final hearings for the project earlier this week, protesters arrived by the busload donning t-shirts and signs that read: “Cuomo Veto Port Ambrose.”

“This is terribly dangerous,” said Jessica Roff, who traveled from Brooklyn to attend the hearing “It’s volatile, it’s dangerous, it’s a terrorist threat.”

“They keep saying there’s going to be no real impacts, but nobody really believes that,” she said. “There’s nothing about it that’s good.”

The same sentiment was echoed by those who attended the public hearings in New Jersey.

“They call it Liberty Natural Gas, but with this project, it’s the opposite,” said Jeff Tittel, director of the New Jersey Sierra Club. “Patrick Henry famously said, ‘Give me liberty or give me death.’ With this proposal, we may get both. If there is a storm or accident, this is a giant bomb off our coast.”

But Whelan says many of the people opposing the project are misguided and acting out of fear. He argues that a federal environmental study on the proposal discounts any thought the port presents any type of safety risk. He said it had been studied by law enforcement officials and that a required 500 meter safety zone would keep other vessels away.

“The facts matter,” Whelan said. “This is not a security risk.”

Whelan also vowed the $600 million project would be used solely to bring liquefied natural gas into the country and not to export it — a fear brought up by many opponents.

“I suppose the overriding reason not to have it is we don’t need it,” he said. “It makes absolutely no sense.”

Liberty contends that because long-haul pipelines originate in the Gulf of Mexico and Western Canada, most of the country’s natural gas supply is used up before it makes its way to the New York metropolitan area in the winter months, driving up prices. The U.S. Energy Information Administration says New Yorkers consumed about 1.3 trillion cubic feet of natural gas in 2014.

The company says the proposed port would allow them to inject gas into the existing pipeline system, feeding the supply in New York City and Long Island, which would result in lower prices. It isn’t the only proposal on the table, however: Several land-based pipeline projects are also in the works, including two planned to start bringing cheap natural gas to New York City from the prolific Marcellus Shale wells of Pennsylvania by Port Ambrose’s 2018 goal.

Liberty says the project will be able to deliver about 400 million cubic feet per day, resolving a bottleneck and bringing lower prices to the region without being unsightly.

“A ship will come to the mooring, that’s 20 miles off shore, roughly 10 times during the winter and re-gasify its liquid cargo and deliver it to the existing pipeline structure,” Whelan said. “You’ll see the pricing benefit. You’ll never see the ships.”