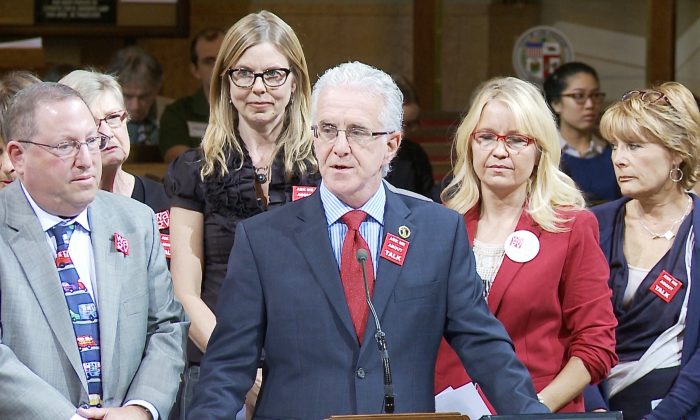 City council members Paul Koretz (L) and Paul Krekorian (R), along with and members of Women Against Gun Violence (back row), speak about the need for stricter gun laws in front of the Los Angeles City Council Meeting in Los Angeles, Calif. on Nov. 7, 2014. (Eric Zhang/Epoch Times)
US

Proposed Law in L.A. Requires Guns to Be Locked at Home

LOS ANGELES—Several Los Angeles City Council members on Friday proposed a city ordinance that would require residents to safely secure their guns at home when not being used, either with a trigger lock or in a locked container.

Council member Paul Krekorian, the author of the motion, said it was modeled after a city law in San Francisco passed in 2007 that requires guns to have a trigger lock when not in use.

San Francisco’s ordinance was challenged by gun owners, who said the regulation prevented them from easily using their firearms for self-defense. In March, a Ninth Circuit Court upheld the ordinance, saying it did not infringe on gun owners second amendment rights.

Krekorian, who has worked with various organizations and other councilmembers for twenty years to reduce what he calls the “plague” of gun violence, said it is just common sense.

“If you have a gun in your home and you do not secure it and lock it when it is not in your possession, you are not being a responsible gun owner,” said Krekorian.

California state law requires a trigger lock to be sold with every gun in the state, but there’s no requirement that residents use these locks.

Krekorian says taking the law a step further would make it less likely these guns are used for unintended purposes.

“Too often in Los Angeles somebody who becomes suicidal gets easy access to a firearm in a home that belongs to someone else,” he said. “Too often a child goes to play at another friend’s house, and they find a gun that’s unsecured, and they play with it, not knowing about the dangers that are involved with it, and that child is killed or grievously injured.”

Hollye Dexter, with a Los Angeles-based group called Women Against Gun Violence (WAGV), is a case in point.

“My little brother Christopher was only seven years old when he was shot in the head,” said Dexter on Friday at City Hall.

Dexter’s brother survived, but was left with a traumatic brain injury.

“We had no idea that our neighbors kept a loaded gun in their home,” said Dexter. “It never occurred to us to ask, but you can, and I urge you to.”

WAGV introduced their TALK Project, which educates school children and their families on gun violence, prevention, and the safe storage of firearms.

According a report done by an anti-gun violence organization called the Brady Center, 60 percent of gun-related deaths among children and teens occur in their home or that of a friend or family member.

It is statistics and other studies that link gun prevalence with high gun-related violence that proponents point to when advocating for stricter gun laws.

The U.S. has the highest rate of civilian gun ownership in the world, according to the United Nations Office on Drugs and Crime.

One study published in the American Journal of Medicine in Sept. of last year found that the U.S., compared with twenty-six other developed nations, had the highest number of gun-related deaths.

Another study published in the same journal in April of 2013 found that, among the 50 states, “states with higher rates of gun ownership had disproportionately large numbers of deaths from firearm-related homicides.”

The National Rifle Association argues there is no evidence that more gun control reduces crime, injuries, or suicide.
“More Guns, Less ‘Gun Control,’ and Less Crime,” the NRA says about gun control on its website.

The L.A. city proposal requiring guns to be locked up in the home will be referred to the Public Safety Committee, before it comes to the Council for approval.