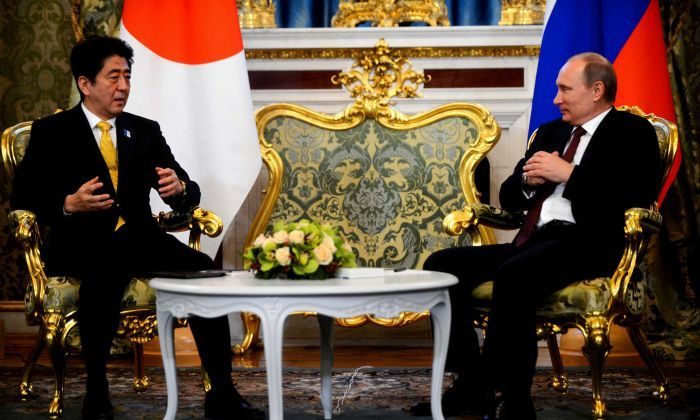 Proposed Japan-Russia Natural Gas Pipeline Would Be Good News for Tokyo and Moscow, But Bad News for Washington

Ever since the Fukushima disaster forced the closure of all of its existing nuclear power plants, Japan has depended heavily on natural gas to power its factories and cities. Japan now consumes nearly one-third of the world’s supply of liquefied natural gas (LNG) – the liquid form of natural gas that is easily transported by boat. The price of LNG is far more expensive than regular natural gas, as the liquefying process and transportation costs double – and sometimes triple – the price of the gas. High demand for LNG in the region allows suppliers from Australia and Qatar to sell it at exorbitant prices.

In order to obtain cheaper gas, key policymakers in the Liberal Democratic Party (LDP) and the New Komeito Party are resurrecting an old plan to import natural gas via pipeline from Russia.  By supplying gas at a much cheaper price than LNG suppliers, the pipeline would be a major victory for power-hungry Japan. And it is no coincidence that the pipeline is being considered just a few days after Russia inked a deal with China to build a China-Russia pipeline. But as Russia’s Vladimir Putin expands his natural gas prowess to East Asia, the United States – and its abundant supply of shale gas — may be affected by these recent turn of events.

Over the weekend, Bloomberg reported that Japanese policymakers decided to renew a push for a $5.9 billion natural gas pipeline from Russia in an effort to cut energy costs after the closure of all nuclear power plants on the island. A group of 33 lawmakers from the LDP and New Komeito are backing the 1,350 km pipeline between Russia’s Sakhalin Island and Japan’s Ibaraki prefecture (just northeast of Tokyo). Naokazu Takemoto, the group’s secretary general, said that he plans to propose the project to Prime Minister Shinzo Abe in June so it’s on the agenda when Putin visits Tokyo in the fall.

In the early 2000s, Exxon and other natural gas suppliers considered building a similar pipeline between Sakhalin and Japan, but the proposal was abandoned when Japanese electric and gas utilities were reluctant to purchase the gas. And they made the right decision; nuclear energy was well on its way to becoming Japan’s main source of electricity generation. But after the Fukushima crisis, electricity companies are singing a different song, and are eager for such a pipeline.

Japan and Russia aren’t new energy allies. Japan imported 9.8% of their LNG from Russia last year. And in 2012, Gazaprom – Russia’s state-owned natural gas company – agreed to double LNG shipments to Japan by 2020. As part of the agreement, Tokyo arranged to buy LNG from Gazaprom’s yet-to-be-constructed export terminal in Vladivostok. The terminal, which is still under construction, has been riddled with delays and isn’t expected to start operations until at least 2019. When it does go online, it will export 10 million tons of natural gas per year to Japan, on top of the 10 million tons Japan currently receives from a different terminal. The government actually chose the Vladivostok project over the pipeline in 2012, because they believed it was more feasible.

The Japan-Russia pipeline is also an interesting speed bump for the United States, which has been projected to be a major supplier of LNG to Japan and the region as a whole. The shale revolution has helped American LNG become the cheaper alternative to expensive LNG from Australia or Qatar. As Japan pays on average $16/MMBtu for LNG from those two countries, American LNG is expected to cost roughly $12/MMBtu. I say expected because the United States hasn’t yet started actually exporting LNG to Japan (aside from a small amount from Alaska, which isn’t even price linked to lower-48 state prices). The Department of Energy is finally beginning to approve the export of US LNG destined for non- free trade agreement (FTA) nations, like Japan. By 2019, the US is expected to be exporting at least 9 million tons of LNG per year to Japan (a figure that may grow depending on how quickly the Obama Administration approves export terminals and whether Japanese companies continue to make deals to purchase American LNG).

But Russian natural gas delivered through a pipeline would be roughly $8/MMBtu, a significantly cheaper price than “affordable” US LNG. Plus the pipeline is expected to meet 20% of Japan’s natural gas consumption – a significant chunk of the market that the US will lose access to. Of the LNG export terminals approved by the US Department of Energy, only about 10% of the gas is destined for Japan. With the introduction of Russian gas, American LNG destined for Japan may not increase much more than that 10%.

Don’t get me wrong; a pipeline from Russia wouldn’t spell out the end for US LNG exports to Japan. The LDP government understands that they have to diversify its supply of natural gas, and that the US will be able to play a role in that diversification. Despite Russian pipelines to China and Japan, American LNG exporters will still find customers in Asia. However, they will have to change their strategies and pricing to compete with much cheaper Russian gas – something they likely did not expect until this year.

Anyway, I am talking like the Japan-Russia pipeline is a done deal, which it isn’t. Any action between Russia and Japan on a potential pipeline will be hindered by territory disputes surrounding the Kuril Islands. If they are able to overcome that obstacle, then more dynamic cooperation between the two nations will be possible, and the proposed pipeline might see the light of day.

Japan needs cheap natural gas. Last year they spent a record 7 trillion yen on LNG imports, which translated into higher electricity prices for Japanese citizens and businesses. Domestic manufacturers are abandoning Japan and moving their factories to countries with cheaper electricity. A Japan-Russia pipeline would help revitalize the Japanese economy, but at the cost of undercutting America’s energy trade and spreading Russian influence in the region.